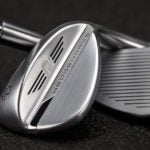 As low bounce wedges have continued to gain in popularity in the professional ranks, a number of manufacturers have started to make the Tour-only offerings available in the retail marketplace for recreational golfers who could benefit from the unique wide sole geometry, including Titleist’s new WedgeWorks Vokey Design SM8 Low Bounce K Grind.

Used by major winners Adam Scott and Webb Simpson, the wedge features Vokey’s wide, cambered K Grind sole for maximum forgiveness on shots around the green and out of the bunker. Scott, in particular, was taken by the wedge’s versatility but felt a wedge with the same grind and less bounce could be a benefit for the firm conditions Tour players face on a regular basis.

“Adam Scott was using the original Vokey Design 200 series (260.08) wedge for several years,” said Vokey Tour rep Aaron Dill. “As far back as 2012, we started testing the new K grind with him after he mentioned he was looking to improve his bunker play. He was seeking more forgiveness and — after some blind testing — Adam was blown away by how much easier coming out of the sand could be with this grind. We started with a 60.10 K, and as conditions firmed up, Adam mentioned that a little less bounce could be the key. The 60.06 K was born and has been in his bag ever since.”

Compared to the standard SM8 K Grind, which includes 14 degrees of bounce, the WedgeWords Low Bounce version has just 6 degrees of effective bounce with the same wide, cambered sole that’s become a staple of the K Grind. The Low Bounce version is currently offered through Vokey’s WedgeWorks program in 58- and 60-degree lofts.

The wedge comes with Vokey’s spin-milled grooves that increase friction on the face and maximize shot control. Grooves are individually cut with microgrooves positioned in-between the larger grooves to enhance spin on partial shots around the green.

We gave an editor $100 to spend in our pro shop. Here are his picks