How Justin Thomas sticks it with every club in the bag

By Luke Kerr-Dineen   /   By Justin Thomas

Justin Thomas isn’t your prototypical modern-day professional athlete. At 5’ 10” and 160 pounds soaking wet, his slender frame hasn’t stopped him from gracing the top of the sport at every level he’s played. A standout talent in junior and college golf, Thomas has become one of the most feared and emulated players in the game today. It’s easy to focus on Thomas’s power, especially when he’s got driver in his hands. The Kentucky native and proud University of Alabama alum owns a flashy and freewheeling swing that’s built for speed, and it’s helped him become one of the best best pound-for-pound drivers of the ball in the game’s history.

But while Thomas’s ability to generate power remains his most acknowledged skill, it often overshadows another standout element of his game: his elite-level accuracy from the fairway. To say that Thomas, now 26, is deadly when hunting flagsticks isn’t hyperbole: Over the past three seasons, this one included, Thomas has placed sixth, fourth and is currently fifth in Strokes Gained: Approach the Green.

In 2017 he led the PGA Tour in approach-shot proximity to the pin on swings taken between 50 and 125 yards of the green. The following year, he finished inside the top 10 in the 200- to 250-yard range. His pinpoint accuracy from seemingly every distance is why he ranked third, third and first in scoring average over the past three seasons. Justin Thomas may be a bomber off the tee, but he’s a sniper coming into greens. Better yet, he knows how to finish the job.

At the time of this writing, Thomas’s birdie-or-better percentage of 28.6 is bordering on historical. On these pages you’ll learn from Thomas himself on what makes his iron game work, club by club. While he spends most of his days competing against the best players in the world and at the highest levels of the game, his lessons are easily transferable to the weekend player. It’s digestible stuff that has the ability to transform your iron game. Get ready to make birdies in bunches. —Luke Kerr-Dineen

WEDGES AND SHORT IRONS: Focus on the fundamentals

My dad has been my swing coach for as long as I’ve been playing golf. As a PGA professional, he stressed good fundamentals— making sure my stance is about shoulder-width apart, that my grip is good, that I’m in a good athletic posture. Even today, we really grind on them to make sure they’re spot on, because the way you set up to the ball goes a long way toward determining the quality of your swing.

It’s something a lot of recreational golfers overlook. When I’ve got a wedge or short iron in my hands, I’m thinking “birdie.” The first things you have to assess are the wind, the lie, how much you want the ball to spin and how the green’s slope will affect the ball’s roll once it lands. Wedges and short irons are about precision, so once you compute the variables, your next job is to focus on hitting your number.

I like to play the ball in the middle of my stance and set my feet a little closer together when hitting wedges. (If I need to flight it a little more, I’ll move the ball back and choke down.) And don’t be afraid to experiment. Try different stance widths and ball positions when you practice, and note what these changes do to your trajectory, distance and spin. You need more than one kind of shot to consistently get the ball close from short range.

There is a constant: Always make an aggressive swing.

RELATED: This is how your right arm should feel at the top of your backswing 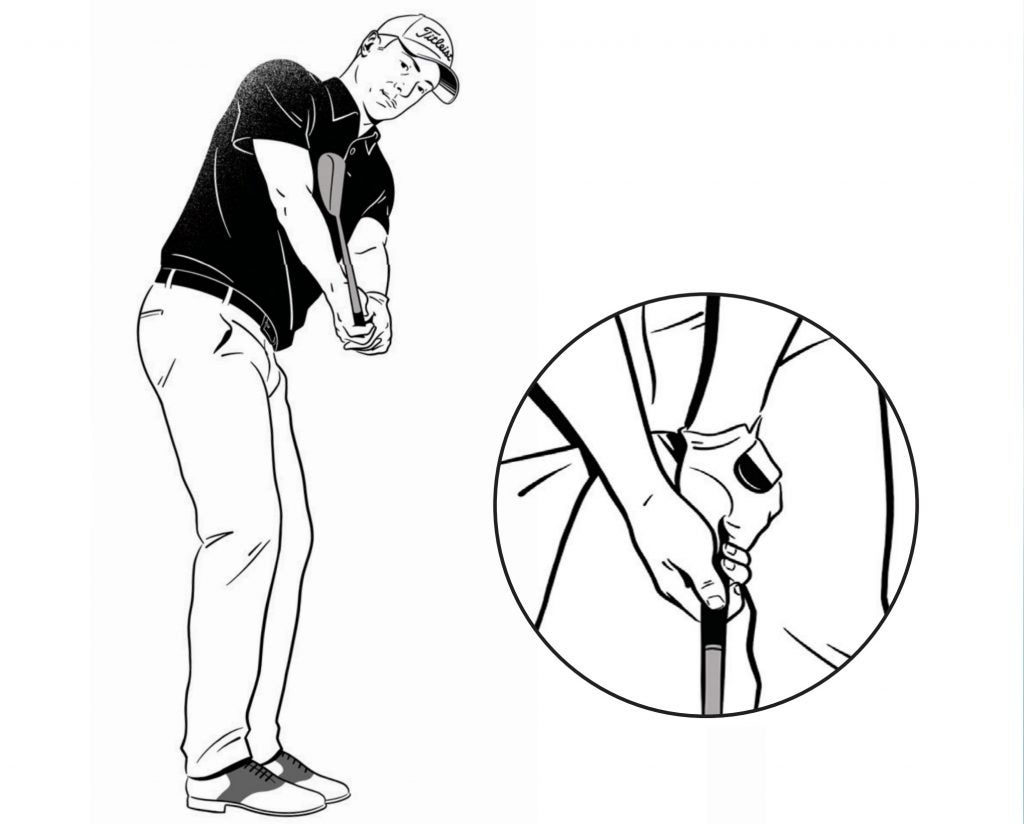 Get into your setup, stretch the club out in front of you, then rotate back. Check that the clubhead is in line with your hands when the shaft is parallel to the ground. Next, return to address and make your normal swing. This simple drill helps keep the club in front of you. It’s saved me a lot, because if the clubhead ever gets behind my hands, I’m usually toast. In addition to this drill, I’m always checking my grip. I prefer it slightly stronger than neutral, which helps me flight my wedges lower and with more spin. When I look down, I want to see two knuckles on my left hand and confirm that the “V” in my right hand points toward my right shoulder
MID- AND LONG IRONS: Stay Grounded

A lot of people talk about the fact that I get way up on my toes when I hit the ball. It’s true—at times it’s almost as if I’m airborne (sequence, below left). It started when I was a kid. I was always among the smallest guys out there—I had to swing hard to keep up with bigger players.

It worked, and the move stuck. To be honest, I’ve tried to stop doing it over the years. I’d watch all the swings of the guys I admired, like Tiger Woods and Adam Scott, and I’d work on keeping my heels lower, but I always ended up hitting it shorter. After a while, I simply stopped caring what my swing looked like and went back to swinging hard.

The truth is, I don’t even notice when I get up on my toes, but it mostly happens when I’m swinging my driver, where max distance is usually priority number one. As soon as I transition out of my woods to my long irons, things kind of go back to normal. I think that’s something a lot of golfers can learn from. I see a lot of players using the same swing with their 3-, 4- or 5-irons that they use for their driver. Maybe it’s because the shafts at the top end of your iron set are still pretty long. My feeling is that recreational golfers instinctively swing their long irons too hard, because deep down they know they haven’t taken enough club.

Here’s an important key: Your goal shouldn’t be to hit your long irons far. The secret to knocking down the pin from long range is to make solid contact. Do that and distance will take care of itself (and you’ll hit it straighter, too).

It won’t matter how far you are from the flagstick. You’ll always get home. 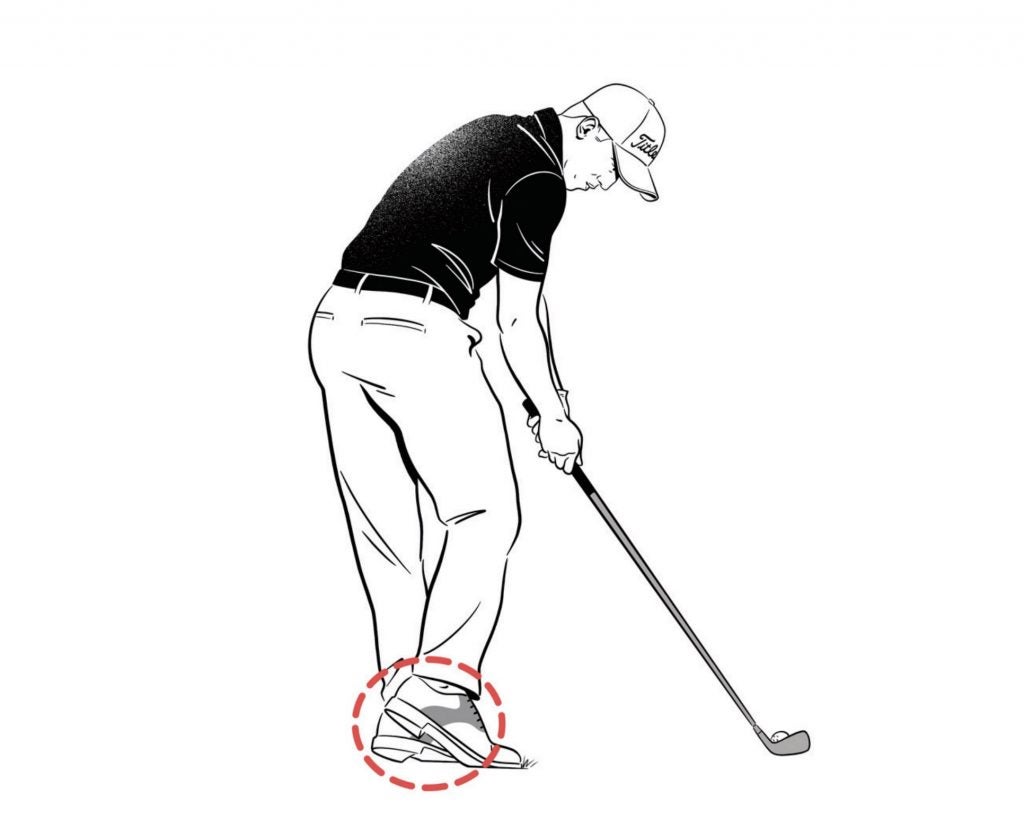 Not taking enough club is a common trap. It’s why you often come up short or overswing so much that you end up hitting a terrible shot. So when you’re hitting from long range, take one more club! I do it all the time. With the confidence that comes from knowing I have more than enough firepower, I can stay down on the ball and make a more rhythmic motion. There’s no need to get way up on my toes. Centered contact is the goal.

Sometimes your driver doesn’t always leave you in the best spots. Challenging lies are a part of the game. Being a good iron player means understanding how these situations affect your swing and ball flight and knowing how to adjust for them. The only way to familiarize yourself with the grab bag of lies you’ll find during the course of play is to get off the range. Practice rounds are critical in the pro game, but recreational players rarely take advantage of them.

When you’re on the course, you’re faced with all kinds of different things: Different wind conditions, different lies, slopes, yardages, grass types. You’re forced to adapt to these variables and learn how to power the golf ball through different windows.

It’s something you can’t really teach—you just have to do it enough and experience it for yourself. Generally, when I have a below-average lie, you’ll see me choke down and take an extra club. I won’t swing as hard, because my main goal is to make sure I catch the ball solidly in the center of the clubface (just like with long-iron approach shots). And unless the lie won’t allow it, I’ll take a wider stance. This gives me extra balance. A solid base makes it much easier to execute your swing and get the clubhead on the ball, especially if you’re hitting off a downslope or if the ball’s situated below your feet. Balance is important on any swing. When you’re in a funky situation, it’s critical. 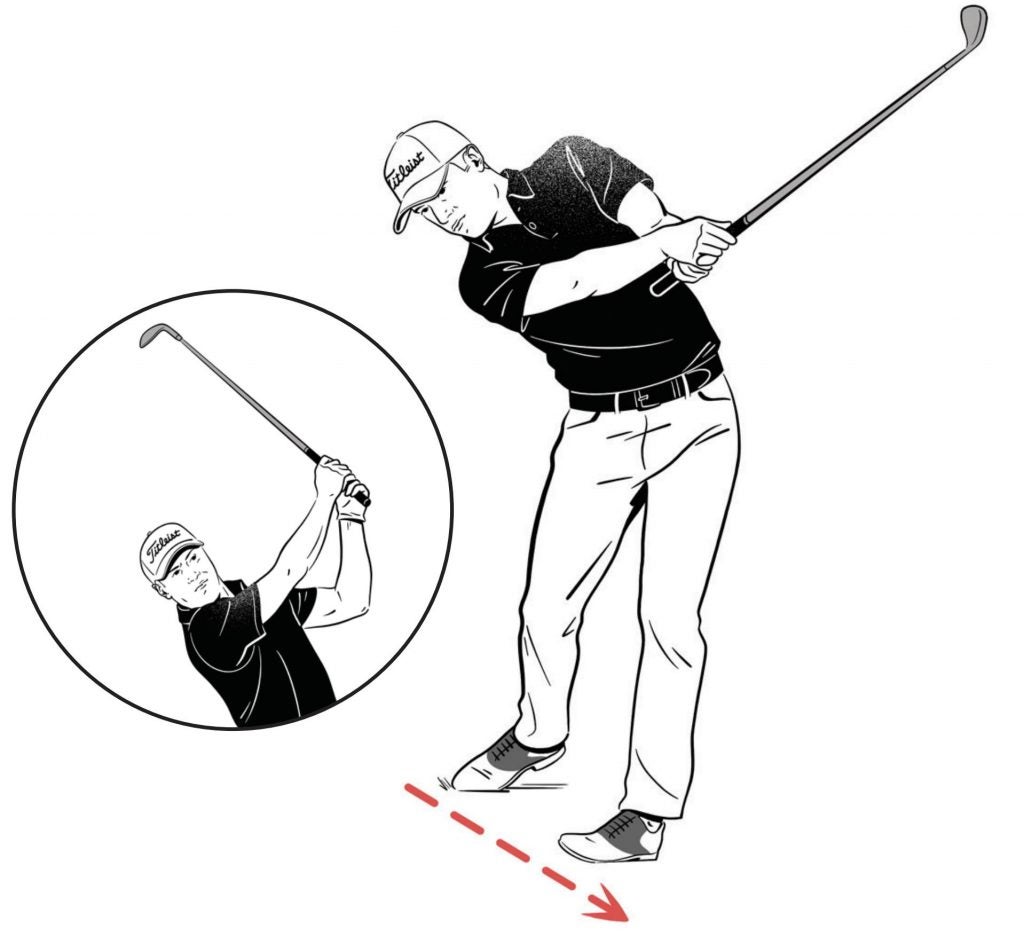 When I find myself in a really tricky or uneven lie, I’ll more often than not make the following adjustments: 1) choke down, 2) widen my stance, and 3) abbreviate my follow-through. This combination helps me maintain balance from start to finish and dramatically improves my chances of making solid contact on the sweet spot. This is the priority when dealing with imperfect lies. I make an extra adjustment on sloping lies. If I’m on a downslope, I’m careful to tilt my shoulders at setup to match the direction of the slope. I stay down on the ball all the way through the shot, swinging “down the hill.” This move guards against me catching the shot thin.
“The only way to familiarize yourself with the grab bag of lies you’ll find during the course of play is to get off the range.”
IRON MINDSET: Turn bad iron days into solid rounds

I’m not that old, but I’ve already learned a lot about myself and my game. I’ll be the first to admit that I didn’t handle myself that great in college. I had that little bit of immaturity and would let it affect my game. I’ve always been a fiery player, but I think I used to let my emotions dictate my strategy rather than using my brains. I’d hit one bad shot. I’d hit another one, and then it would kind of snowball from there and I’d find myself in some pretty deep trouble.

RELATED: A highly addictive training aid to improve your putting.

Now I might still get a little bit fiery or upset after a bad swing, but I no longer let it affect the next shot. I work hard on staying patient, on accepting whatever I’ve been given in terms of the lie, and not allowing what’s happened in the past dictate what’s going to happen on my next swing. Being able to regroup, collect myself and focus on my process and pre-shot routine didn’t come naturally. It’s taken some time. Everyone matures differently, and hey—I’m still only 26. But I think the sooner you can learn it, the better an iron player you’ll be.

My advice: On those days when it’s not going your way, simplify things. Focus on your setup. Prioritize contact, not speed. Picture the line you want to start the ball on and make that your visual. Pull the longer iron and swing it smoother. If you do these things, you’ll find yourself posting respectable scores even on your off days. And when things are clicking, these same principles just may fuel your best round ever. 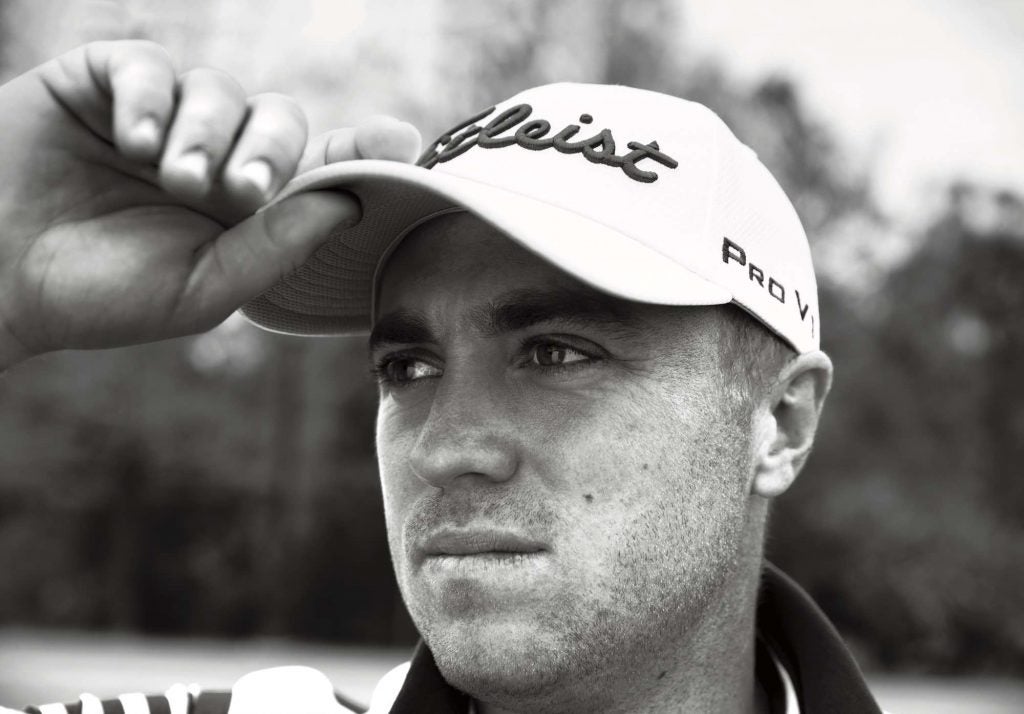 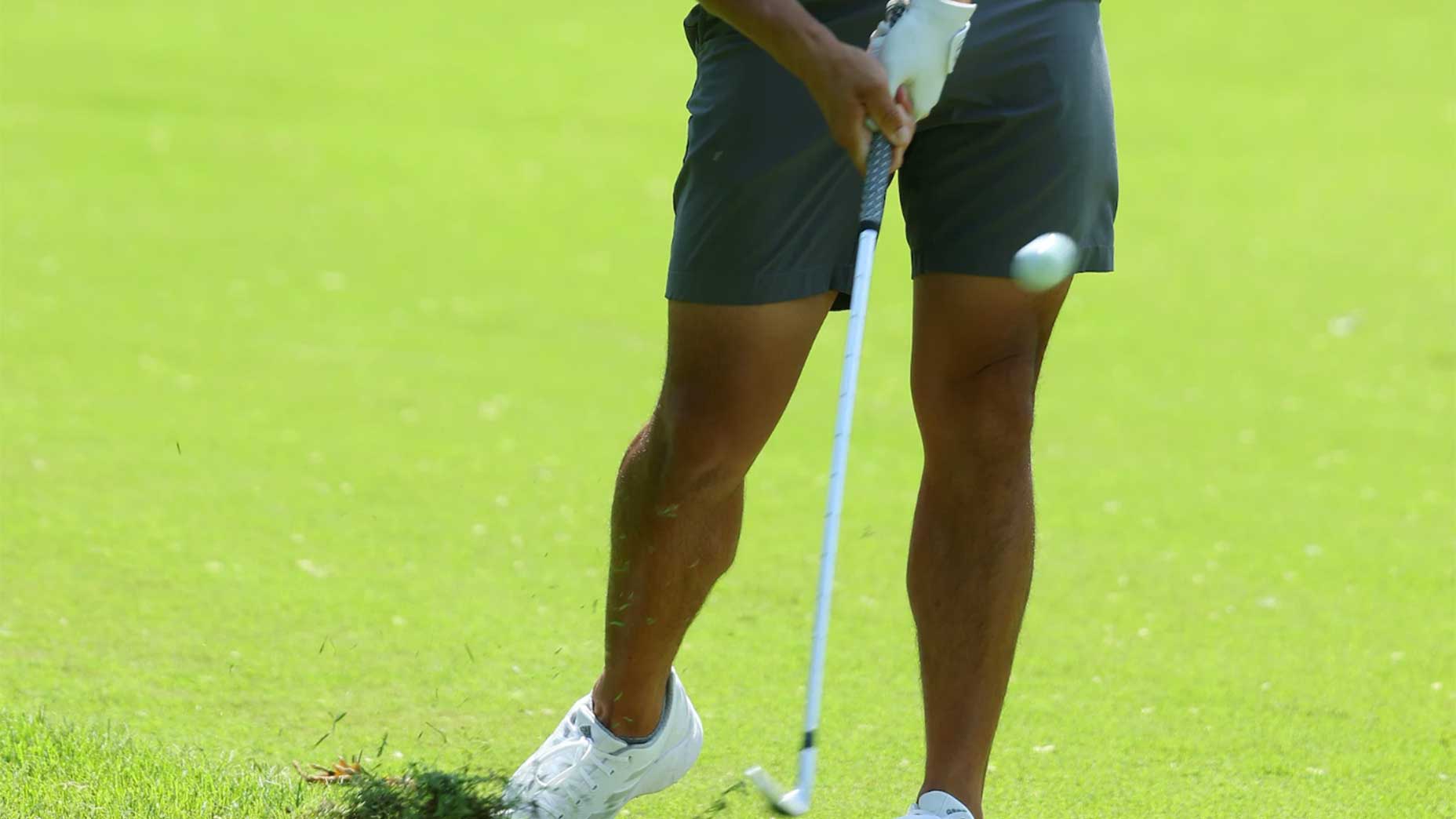 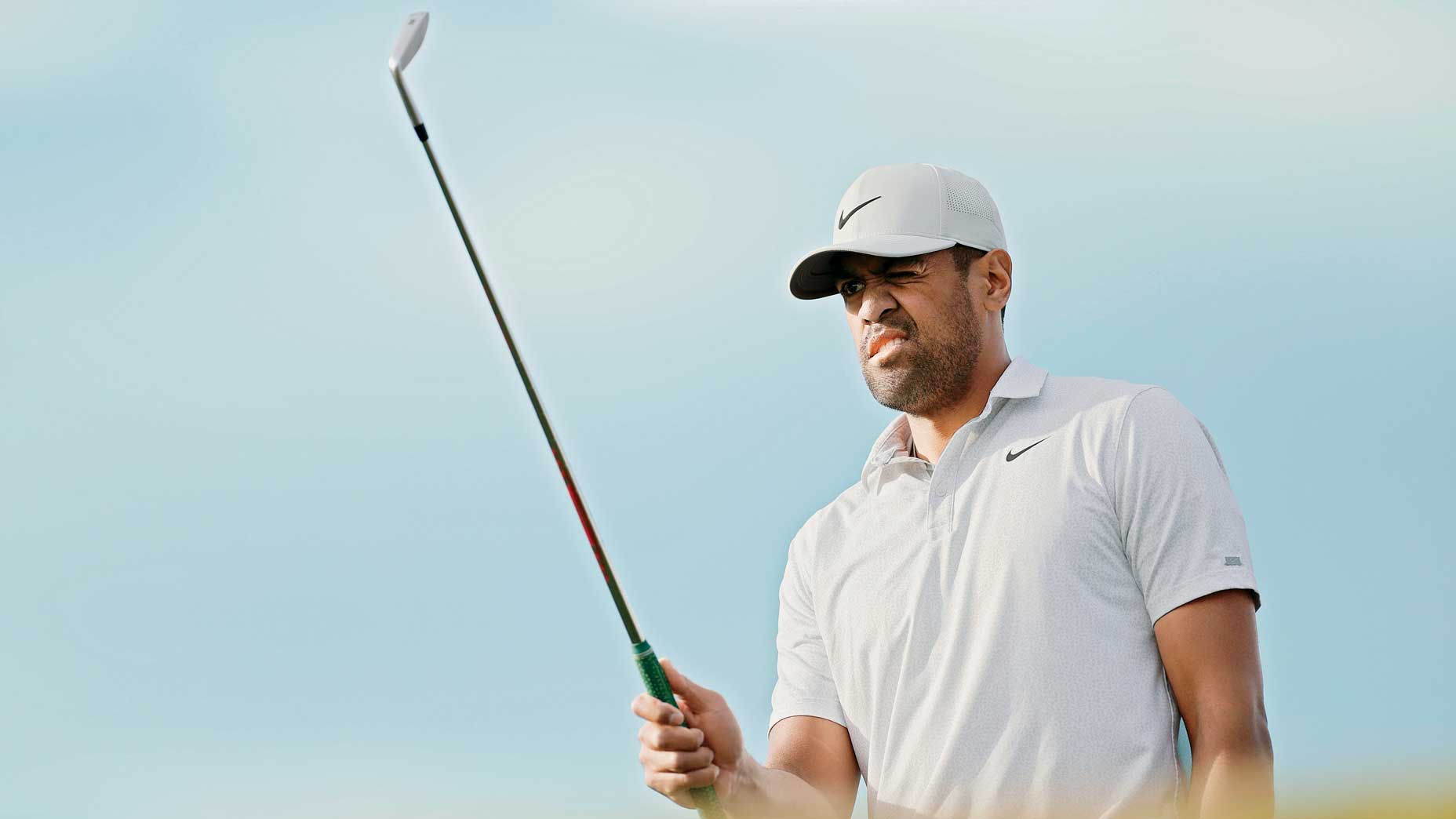 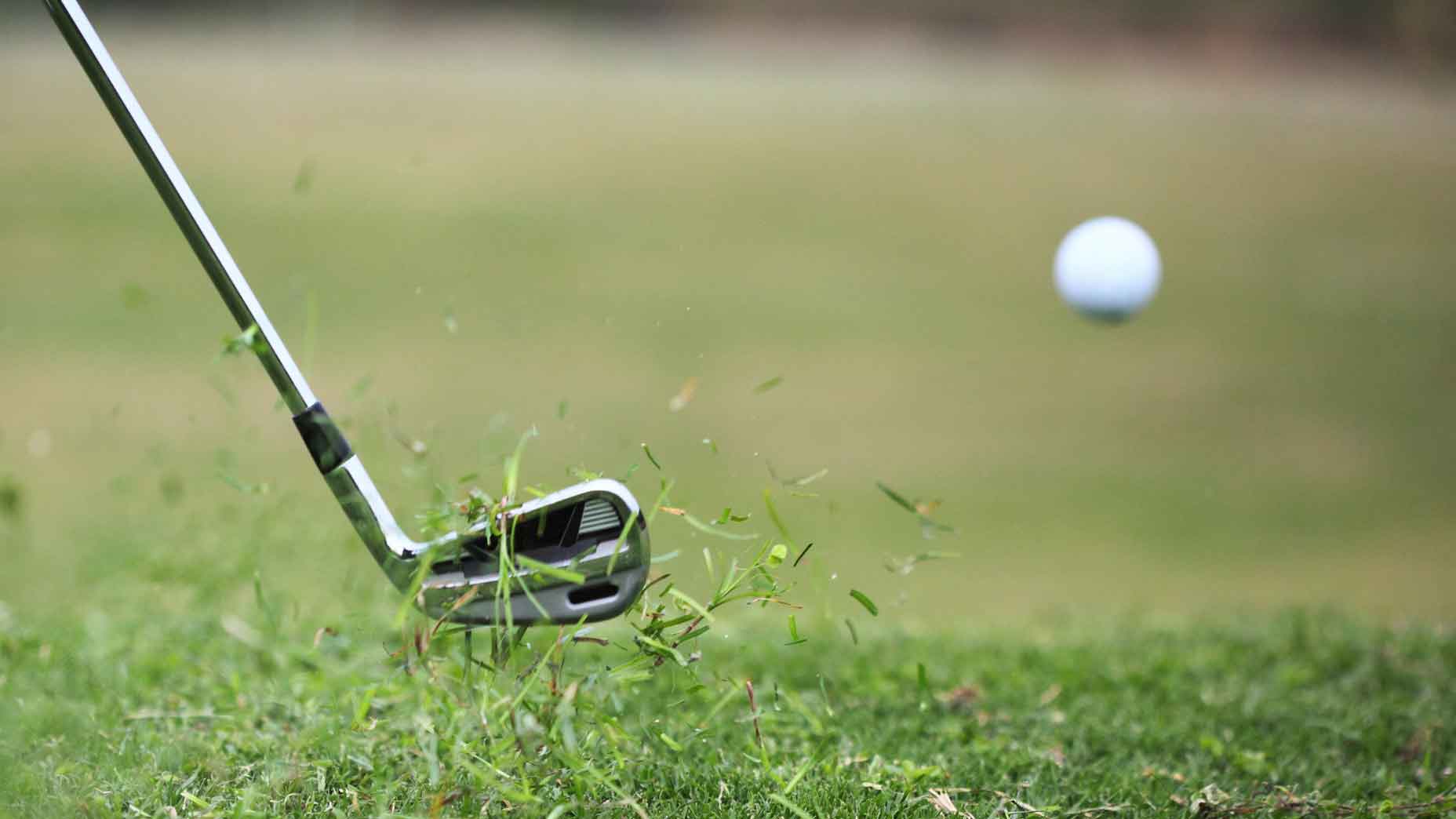 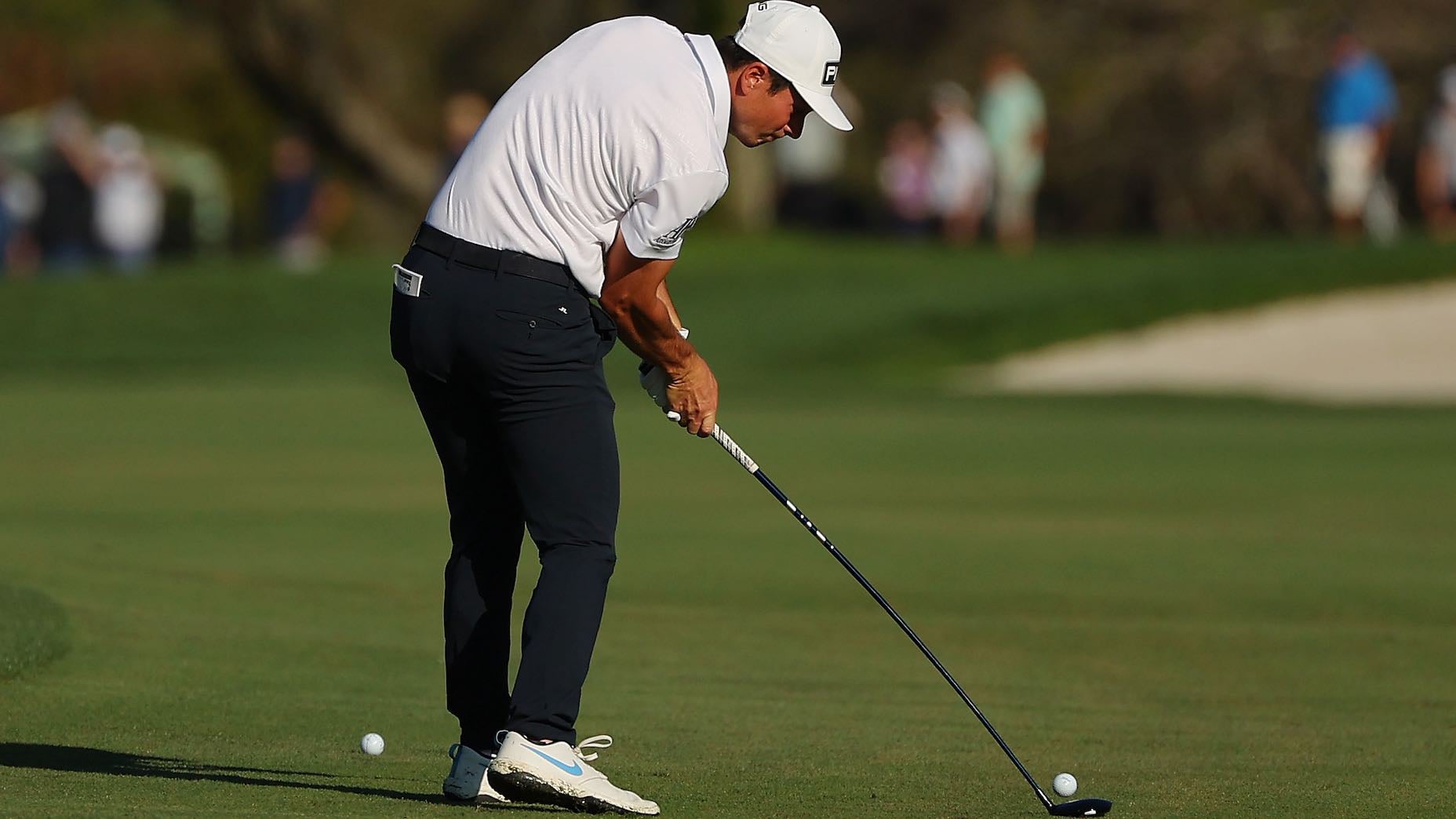