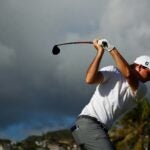 Russell Henley recently made the switch to Titleist's TSi4 driver.

Titleist’s TSi continued to make noise in Hawaii as the most-played driver at the Sony Open. Of the 47 drivers in play, 43 were TSi2, TSi3 and TSi4. It’s also worth noting that 14 did so without an agreement — a sign the driver is winning early head-to-head testing battles.

The TSi driver has been on a roll since it was first introduced in September at the Safeway Open. Even with a short runway to put the drivers and fairways through their paces following the conclusion of the playoffs, Titleist still topped the driver count (42) and saw 26 players use TSi the very first week. Titleist also won the driver count (40) in Europe that same week.

The momentum hasn’t slowed since the winter break.

“Russell was seeing more speed off the face but was really blown away on TSi4’s forgiveness versus what he had been playing in the prior generation TS4,” said Titleist Director of Player Promotion J.J. Van Wezenbeeck.

Engineered with low, forward CG for significant spin reduction, Titleist TS4 Drivers deliver a longer, more piercing ball flight. Beginning with a challenge from golf’s greatest athletes, the Titleist Speed (TS) Project is a peerless pursuit of speed where every micron and milligram matter. The new Speed Chassis is the result of a two-year mission to deconstruct the driver and then design greater speed into every detail. Two letters – TS – mark the way to the future of Titleist speed.
Buy Now

One week after Marc Leishman was spotted with an Odyssey White Hot OG #1 WS putter at the Sentry Tournament of Champions, Si Woo Kim joined the list of early coverts with a #1.

“Right away Si Woo loved the feel of the insert,” said Odyssey Tour Rep Joe Toulon. “He and his caddie noticed an instant improvement in speed control and he couldn’t wait to put it in play.”

The OG is a recreation of the original White Hot and features the same two-part urethane insert formulation that put White Hot on the map 20 years ago.

A company representative confirmed the deals vary slightly by the player, and most are not 14 clubs. At the moment, staffers are still being fit for new gear, which means we might have to wait a few weeks before getting an accurate idea of what they’ll have in the bag this year. One guarantee is all 8 on the PGA Tour will be required to have the PXG logo on the side of the hat.

Mass was also repositioned in the head toward the sweet spot, and along the perimeter, for a softer feel and greater stability.

As Father Time continues to creep closer, Jim Furyk doesn’t have any interest in bidding adieu to his time on the PGA Tour. Even at 50, the former U.S. Open champion continues to maintain a presence on the big tour, even as he logged six starts on the PGA Tour Champions last year.

While Furyk’s never been considered a bomber on Tour, he’s still trying to squeeze every ounce of distance out of his driver in an attempt to keep up with guys like fellow Callaway staffer Will Gordon, who touch 190 mph ball speed during testing with a Callaway Epic Max LS driver.

Furyk isn’t getting anywhere close to that number, but he did switch to a 47-inch Epic Speed (9 degrees) to pick up some additional juice. Furyk averaged 293 yards off the tee in Hawaii, an increase of 7 yards from his last Tour start at the Safeway Open. Even more impressive? He managed to get longer will maintaining his impressive accuracy (T3 in driving accuracy).

Gear Questions You’re Afraid to Ask: As a beginner, how do I find the right set of irons?

ClubTest 2021 is here! Dive into our testers' reviews of the best drivers, irons, putters and much more