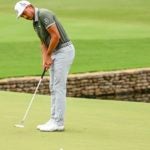 Rickie Fowler’s decision to trade a steel putter shaft for a multi-material version produced by LA Golf was made in an effort to shore up dispersion and stroke consistency. When Fowler had the shaft installed in his Scotty Cameron Newport 2 GSS backup putter, he added roughly 7-8 grams of lead tape to the bottom of the putter to maintain the same swing weight. The shaft felt good from a performance standpoint, but the overall weight turned out to be, in Fowler’s words, “a little too heavy for what I like.”

Fowler wanted something that more closely aligned with the weight of a conventional steel putter shaft, but offered the same performance as the TP135 prototype. So LA Golf went to work building Fowler a complete one-off. When they were done, Fowler had a shaft that offered LA Golf’s proprietary performance, feel and materials at 100 grams — roughly 35 grams lighter than his previous shaft. The butt diameter was also reduced slightly from .640 inches to .600 inches.

“I mean, we’re talking, I mean, minor, minor measurements, but I wanted the grip area to be a little smaller basically to mimic the dimensions of the steel shaft and the weight as well,” Fowler said.

The initial prototype was designed for Fowler to test on Monday and offer feedback before creating a final version with his own graphics. What LA Golf didn’t anticipate was Fowler wanting to put it in play from the jump.

“Definitely feels a lot better from where I was,” Fowler said. “I’ve enjoyed kind of messing around with the putter shafts.”

Fowler went on to use the putter shaft in Memphis where he finished T15 while ranking 34th in Strokes Gained: Putting.

With tight fairways (reduced in width by 60 percent in some cases) and lush rough awaiting players at TPC Harding Park, accuracy will be at a premium for the 102nd edition of the PGA Championship. Seeking a tighter dispersion with his 15-degree Titleist TS3 fairway wood, Justin Thomas worked with Titleist Tour reps to locate a suitable solution. The end result was a shaft change from Mitsubishi’s Tensei Blue CK 80 to Tensei AV Raw Blue 85TX that lead to more accuracy off the tee and from the fairway.

Part of the new AV Raw Series, the Blue profile delivers mid launch/spin characteristics and features a raw finish that reveals the aluminum vapor-coated weave in the butt section of the shaft — a visible reminder of what’s underneath the hood. The low resin content prepreg and aluminum vapor used to make the shaft is thinner and tighter than previous materials. Produced in a vacuum-sealed chamber, the material is designed to reduce shaft ovaling and enhance energy transfer.

Somewhere in the middle

Tommy Fleetwood rarely struggles to hit his numbers, but if there’s one yardage that remains a work in progress for the Englishman, it’s the gap between his 5-wood and 4-iron. Hoping to improve his par 5 scoring, Fleetwood went looking for a club that could hit 235 yards without any issues. Throttling back with a 5-wood — a club he normally hits 265 yards — and trying to finesse the ball is something he prefers not to do. To fill the hole in his bag, Fleetwood tapped a 22-degree TaylorMade SIM Rescue to get the job done.

Fleetwood’s rescue is built to hit the 235-yard number, in addition to a few other shots. While the head has 22 degrees stamped on the sole, the actual loft is 20.75 degrees, affording Fleetwood a slightly open face angle to hit a yardage range from 225-250 yards. The club was built at 40 inches with a decidedly flat lie angle (57.5 degrees) to match Fleetwood’s specifications. To ensure consistent gapping, Fleetwood’s Srixon Z785 5-iron was bent stronger to hit 215 yards.

Two is not better than one

Rory McIlroy’s run with a TaylorMade TP Soto blade lasted exactly one round. On a short leash from the get-go, the four-time major winner opened with 73 and immediately returned to a Spider X that played a role in four wins during the 2019 season. McIlroy didn’t fare any better with a mallet, finishing the week 53rd in Strokes Gained: Putting (minus-1.569).

A ball change led Ben An to make a host of changes to his Titleist equipment prior to the WGC-FedEx St. Jude Invitational. An switched from Titleist’s Pro V1x Left Dash to the 2019 Pro V1x but felt his woods were generating too much spin with the new ball. Working with Titleist Tour reps to optimize his spin rate, An swapped his 9.5-degree TS3 driver (Accra TZ5 shaft) for an 8.5-degree head with a Fujikura Ventus Black shaft. He also changed out the Accra TZ6 shaft in his 13.5-degree TS2 3-wood for the same Fujikura Ventus Black model.