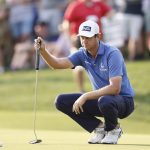 In the aftermath of Harris English’s thrilling 8-hole playoff win at the Travelers Championship, CBS’s cameras caught a glimpse of a piece of gear that captured the attention of a few eagle-eyed golf fans.

Attached to the end of English’s ever-reliable Ping Hohum putter (36.25 inches; 3 degrees of loft) was a Ping Palm Lock grip that looked to be fraying at the seams.

Google “Ping Palm Lock” and you’ll get a glimpse of what English’s grip used to look like before he wore it into oblivion. It makes Jordan Spieth’s worn SuperStroke look practically brand new.

With a fresh grip a mere phone call away, some might wonder why English continues to play a grip that barely looks like a grip anymore. According to Ping’s Tony Serrano, the putter head and grip date all the way back to English’s days at the University of Georgia where he starred on a team that also featured Tour winners Russell Henley, Hudson Swafford and Keith Mitchell.

For those at home who need a little help with the math, that makes English’s putter build a decade old. It’s arguably the oldest grip on Tour — by a wide margin.

“It just feels right for him,” Serrano told GOLF.com. “We were on a call recently with him talking about his putter and he said he has so many great memories making clutch putts that he never saw a reason to change. We’ve built other Hohum putters for him but that one in his bag has always been the golden unit.”

After English’s latest win, which featured a myriad of must-make putts in regulation and during the sudden-death playoff, don’t expect anything to change with the putter anytime soon.

One week after Dustin Johnson announced a partnership with LA Golf that included playing the brand’s driver and putter shaft, the two-time major winner returned to something a bit more familiar in the big stick. In search of a reliable option off the tee, Johnson reinserted TaylorMade’s SIM driver (9 degrees) with the usual Fujikura Speeder 661X shaft. It’s a driver-shaft combo that served Johnson well last season.

One of the most proficient drivers of the golf ball on the PGA Tour, Johnson has struggled to right the ship off the tee this season and entered the Travelers Championship ranked 19th on Tour in SG: Off-the-tee. In the last nine years, Johnson has finished outside the top-15 in the statistical category just once (2013).

As for the putter shaft, Johnson was still employing a TaylorMade TP Bandon 1 mallet with LA Golf’s TPZ graphite.

Titleist’s T100 irons got off to a strong start at the Travelers Championship, where six players chose to put the irons in play the first week they were made available, including Cameron Smith (5-9) and Hank Lebioda (5-9). Lebioda posted his best finish of 2021 (T5) with the new irons in tow.

Nelly Korda’s decision to change putting techniques — from a conventional grip to left hand low — in her last start received most of the attention at the KPMG Women’s PGA Championship, and rightfully so. Korda blitzed the field at Blythefield Country Club with the new grip en route to winning the Meijer LPGA Classic.

What few noticed was the grip change coincided with a putter swap as well. A blade user for most of her career, Korda chose to replace a Scotty Cameron Select Concept 2 Tour Prototype (GSS insert) — the putter she’d used in her previous four wins — with a Special Select Squareback 2. The blade-style putter features a wider flange that’s designed to increase the overall stability of the head.

For Korda, the goal was to locate a putter with a different feel to shore up recent issues with distance control. Based on the two trophies at home, it’s safe to say she’s found a worthy replacement.

Recent putter struggles led Jason Day back to a flatstick that spawned TaylorMade’s Spider Tour — one of the equipment manufacturer’s most successful putter lines to date. Day finished T10 while ranking 23rd in SG: Putting with the Ghost Spider Itsy Bitsy at TPC River Highlands.

Quick-hitters: Bubba Watson had a gear snafu during the second round of the Travelers Championship. He’d still go on to birdie the hole. … Odyssey’s extended its putter count winning streak to 30 (PGA Tour, LPGA and PGA Tour Champions) at the KPMG Women’s PGA Championship.