ORLANDO, Fla. — Tiger Woods has to be one of the greatest putters ever, right? If you’ve watched his career, amateur and professional, unfold, you know that he has used the same style of putter his whole career. His putters, whether they carried the name Titleist or Scotty Cameron or Nike, were all, in terms of their essential design traits, nearly identical to the putter he used as an amateur, the Ping Anser 2, an iconic flatstick with a pleasing patina and serious offset, designed by Karsten Solheim, the Ping founder.

But as far any anyone knows, Woods has used the exact same grip, in terms of make and model, for all but one of his major championship titles (Woods employed a Scotty Cameron grip at the 1997 Masters) and scores of other professional events he has won around the world. If you look closely at the top of the grip, where his left thumb would be positioned when he’s actually making a stroke, you can see the Ping logo on it, a gent known as Mr. Ping in the hallways of Karsten Manufacturing in Phoenix.  [image:14048553]

Mr. Ping is a sort of caricature of the American Golfer that seems to be inspired by some odd marriage between an upright walrus and the former Tour player Ed Fiori. Woods has experimented with other grips over the years, when he’s off Tour. But the grip on his game-day putter has always been (as best as can be observed) a PP58, designed by Karsten Solheim, with artwork (Mr. Ping) by his son John and manufactured by Golf Pride, the first company to make rubber grips. The PP58 is a blend of natural and synthetic rubber and natural rubber, when exposed to the sun, can quickly get slick, and it is likely that Woods switches out his grip with some regularity. In other words, a PP58 comes off and a new one comes on.

On Wednesday at the PGA Merchandise Show, I continued my long-running conversation with John Solheim, now Ping’s chairman, about that grip. Earlier in the day, I had asked two Golf Pride guys about it, so I knew (as an estimate) the answer.

“How many PP58 grips do you think Golf Pride makes in a year?” I asked Solheim. 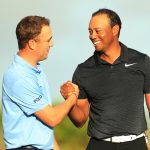 You may also like #AskAlan: Is the Tiger mystique gone? Does anyone fear him anymore?

We’re talking about the thin, slender iconic putter grip used forever by the man who has to be considered one of the greatest putters ever and virtually nobody is using that grip! It shows you how intensely personal putting is, but also how certain things in golf can come in and out of fashion. Stubby, fat, mushy grips, with little taper, in garish colors and splashy lettering (for TV’s sake) are now all the rage.

There are scores of players, on tours all over the world, who use putters modeled on the old Anser 2. There are hundred of players trying to copy Tiger’s circa 1997 stroke. (Stan Utley teaches it.) But Tiger pretty much has the PP58 grip all himself. When his supply runs low, somebody from his team — not Woods himself — contacts somebody at the Ping Tour trailer, or the Ping Tour office in Phoenix, and asks for a new batch. No charge, for Tiger. By the way, you can go on the Walmart website (among others) and by the grip yourself for $7.45, or thereabouts. But the way Woods gets the grip is way cooler, right?

“It’s a silky grip,” one of the Golf Pride men told me. “It must have a lot of good memories for him.”

The PP58 is a slender, light grip that fits in a golfer’s hands like the curved grip of a Derringer pistol grip. “Pistol grip,” in fact, is a term of the art. Likely out of deference to his paid sponsors, Woods has usually used a marker to black out the distinctive white outline of Mr. Ping. But not always. At some tournaments over the years, the white outline of Mr. Ping has been on display, keeping Woods company when he squats to read putts. Some time ago, Ping asked Golf Pride to make a grip they call the PP58 blackout — the same grip, with the Mr. Ping stamped on it, but not in white. The PP58 Blackout, to the cognoscenti.

Mr. Ping — sometimes called Pingman but the company prefers the use of the honorific — was not actually modeled on either Ed Fiori or a walrus. It was modeled by a Ping salesman named Charlie Faircloth, who covered Florida for the company in the late 1960s.

“In those days, and even today, a lot of us kept clay on our desks, so if we had the impulse to design something we could get right to work,” Solheim told me earlier this year. “My father always had clay in his hands. Charlie Faircloth just seemed to me like a regular golfer, with his feet out, a gut and a big red rose.” So that’s who Tiger Woods is blacking out, in a manner of speaking, old Charlie Faircloth.

At the Merchandise Show, two Golf Pride engineers came through the Ping booth, Greg Cavil and Joe King, young, smart guys who were clearly in awe to have the chance to speak to one of the legends of the equipment business. As Solheim explained the lore the PP58 grip they hung on every word. Solheim explained how the grip was perfectly centered to the putter’s center on the Anser 2. He told them about the grip-making tools that his father designed that Golf Pride later used.

“We’re pretty good with that sort of thing,” Solheim said.

They engaged in some more engineering talk. The USGA has always had strict rules about what constitutes a legal putter grip — or any grip, for that matter. The rules change periodically. Solheim explained how his father pushed the various USGA grip requirements right to their limit in designing the PP58. These measurements involve the amount of slope in the grip, the width of its flattest parts and some other things I did not understand, but the Golf Pride guys absolutely did. Still, it was very interesting. There was general agreement that nobody with the yips would want such a slender grip. The main goal of the fat grip is to take the wrist out of the putting stroke. Woods’s wrists are actually quite active in his stroke.

Earlier this month, before having learned that Woods used a Scotty Cameron grip in 1997, I sent Glenn Greenspan four PP58 questions for Woods. Greenspan, as he does, got back to me right away and said he would look into it. But then came a second email. He had checked with Woods’s agent, Mark Steinberg, and Steinberg told Greenspan that they would not be able to answer my questions. I went back for just one: Has Woods ever won a professional event with anything other than a PP58? Radio silence.

John Solheim told me that he once played in a pro-am with Woods in Hawaii, but didn’t ask him any questions about his putter grip or Mr. Ping or anything else. On another occasion, the two men were on the first tee together at the Phoenix Open and Solheim said something by way of thanks to Woods, for his loyalty to the putter.