Tournament officials will no longer consider rules violations phoned in by TV viewers, according to new rule beginning Jan. 1

Attention all armchair golf rules officials who study video replay in search of infractions: your dedication to your craft is impressive. It’s just not needed anymore.

“The message we’re putting out to fans is, What you’ve seen, we’ve seen. Have confidence in us running the event,” said Thomas Pagel, USGA senior director of rules and amateur status. “We want you to be a fan. Enjoy watching the world’s best players. Let the rules be handled inside the ropes between the players and officials.”

The change in protocol, announced jointly Monday by the USGA and the R&A, follows the recommendations of a working group led by the governing bodies and consisting of the PGA Tour, LPGA Tour, PGA European Tour, Ladies European Tour and the PGA of America.

As part of the announcement, the governing bodies also approved a new local rule, available Jan. 1, that eliminates the two-stroke penalty for filing an incorrect scorecard as a result of an infraction that a player was unaware of. “Any penalty for the original breach will still be applied,” Pagel said. “What we’re saying here is that that additional two-stroke penalty is really an unnecessary one.”

These changes are meant to prevent the kind of messy situation that arose at the 2017 ANA Inspiration, where tournament leader Lexi Thompson was slapped with four penalty strokes — two for an improper mark, and two more for signing an incorrect scorecard.

“Is this a joke?” Thompson asked when she was told of the penalty. Many observers wondered the same thing.

The severity of that ruling was compounded by the awkwardness of its timing: though the initial infraction took place during the third round, Thompson wasn’t penalized until more than midway through the final round, after a viewer emailed the LPGA, pointing out the breach. 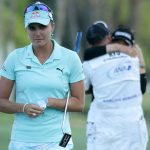 You may also like Tour Confidential: Breaking down the USGA and R&A’s latest rules announcement, Rory’s ’18 expectations and more

Thompson went on to fall to So Yeon Ryu in a sudden-death playoff.

The uproar echoed other rules kerfuffles of recent years, a number of which featured prominent players and major events. At the 2013 Masters, Tiger Woods had two shots added to his second-round score after being called out by a viewer for an improper drop on the par-5 15th hole.

During a playoff at the 2016 U.S. Women’s Open, Anna Nordqvist suffered a two-stroke penalty after video replays showed her dislodging near-microscopic amounts of sand with her backswing in a fairway bunker.

As the controversies mounted, the game’s guardians tried to mitigate them.

In April, under Decision 34-3/10, the USGA and R&A issued a new “reasonable judgment” standard, which protects players from penalties for infractions undetectable to the naked eye. The idea is that just because an infraction appeared on high-def reply, doesn’t necessarily mean that a golfer should have to pay the price.

Monday’s announcement represents the latest effort to cope with the double-edge sword of video technology, which has allowed for greater fan engagement but also turned spectators into self-appointed police officers while subjecting players to what many see as unfair levels of scrutiny.

Under the protocols set for Jan. 1, officials reviewing video will only look at footage provided by the tournament’s broadcast partner. Video from other sources, such as mobile phones or individual cameras, will not be taken into account.