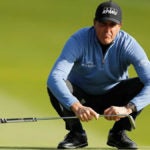 Based on a recent bag photo, it’s safe to assume Tiger Woods won’t be making any equipment changes for the Match II. Phil Mickelson’s setup, on the other hand, appears to be a game-time decision.

During a recent interview on the Callaway Golf Podcast, Mickelson revealed he’s considering a couple of options that will be based on some important factors. Having never played Medalist before, Mickelson will either go with a Callaway X Forged Utility 2-iron (UST I-Rod 95 shaft) or Mavrik Sub Zero 5-wood (KBS 80 shaft) based on the weather conditions and trajectory needed to handle the course.

“The questions that I have are: Do I use 2-iron or a 5-wood?” Mickelson said. “I have never played the golf course, so I don’t know. Do I want to use that 2-iron that I can hit low. If I need to get the ball on the ground and run, I’ll use the 2-iron. On par 5s where I maybe need some more carry, I’ll use the 5-wood.”

Mickelson also plans to wait and settle on a flat stick. Outside of a brief run with Odyssey’s Stroke Lab Ten putter, his putter rotation has routinely featured a Versa #9 and older model White Hot XG blade. While that won’t change at Medalist, Mickelson divulged the thought process he goes through when settling on one or the other for a particular course.

“Do I use the putter I used to win the British Open in 2013 — it’s a little bit heavier mallet, Odyssey #9, with the white-black Versa technology,” he said. “I also ended up putting the White Hot XG blade in my bag, too. But that’s a little bit lighter. If it’s calm or if the greens are really fast, I might use that. I like going back and forth between the two.”

Something else to keep an eye on? Mickelson has been working on the driver at home and credited a softer Aldila Rogue Black 130 M.S.I. 60TX shaft with allowing him to get the face squared up at impact instead of missing it out to the left.

“I’m really excited with some of the changes I’ve made [to the driver],” he said. “One is my golf swing setup, and one is the driver head itself, as well as the shaft. Going to a slightly softer shaft allows me to square the clubhead up a lot easier. My miss with the driver is left, and this slightly softer shaft helps so I don’t have to use my hands as much. My miss really isn’t left anymore, it’s right. That takes some getting used to, but it allows me to swing freely with the driver.”

Mickelson and his game-time decision gear setup will team up with Tom Brady on Sunday to take on Tiger Woods and Peyton Manning. The match starts at 3 p.m. ET and will be broadcast live on TNT, TBS, truTV and HLN.

Editor's picks: 6 spikeless golf shoes perfect for on and off the course