Why Dustin Johnson thinks Tiger Woods will win The Match 2 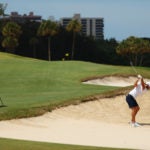 Dustin Johnson carried his own bag on Sunday, which he said he hadn't done in years.

Last Sunday at Seminole Golf Club, Rory McIlroy took his drive a bit left on the 6th hole, which turned out to be plenty right. Though the tee shot landed on the 4th tee box, the area opened up the green a bit better than perhaps a shot down the middle, and McIlroy converted for a birdie. The two skins that came with it gave eventual champions McIlroy and Dustin Johnson five of the first six skins in their TaylorMade Driving Relief match against Rickie Fowler and Matthew Wolff.

Rory’s dad, Gerry, is a Seminole member, and Rory and dad have played the track numerous times. A fact not lost by those standing on that 6th tee box.

“Did your old man teach you that one?” someone remarked in the background.

All facts not lost on Johnson.

Not that Woods, a 15-time major champion, needs too much additional help, but Johnson said home-course advantage will give Woods and partner Peyton Manning the overall advantage over Phil Mickelson and Tom Brady on Sunday at Medalist during The Match: Champions for Charity.

“Peyton and Brady, I think they’re pretty similar golfers,” Johnson said Wednesday. “I would probably give a little edge to Tiger because it’s his home course.”

Johnson, who Wednesday was seen as part of a national ad campaign for sports drink BodyArmor, discussed his skins game, this Sunday’s event, the return of the PGA Tour, and more in a Q&A with GOLF.com:

G: What was it like to get back out there and be part of the first live golf event in two months?

DJ: Yeah, obviously it was great. We raised a lot of money for charity. It was a lot of fun just to get back out and compete and get back to some kind of normalcy. And it was kind of good to get a little experience on what it’s going to be like when we return here, on the second week of June – playing, having the cameras there, no fans. It was a little strange, but it was a lot of fun, though, just to get out and compete again.

G: Even with the charitable aspect, how important was it to you to win it?

DJ: Obviously it was great to win. But it was for charity, and we raised a lot of money for both sides. Obviously the viewers, too, called in, and raised a ton of money also so that was really neat just to be a part of something like that.

G: What was it like to play without fans, especially considering you’ve played in front of large galleries for most of your career?

DJ: I want to say the first week will be a little strange, but after that, we’ll get used to it. But yeah, it’s definitely going to be different because we’re used to being out there – whether it’s a practice round or especially when we’re playing, we have quite large crowds on a daily basis. So it’s going to be interesting.

G: Without fans, will that affect your play? Do you play off the crowd at all? Or have you naturally blocked it out?

DJ: I never competed in a PGA with no fans, so … (Laughs.) There won’t be as much energy out there, but still, at the same time, it’s still going to be a big event and, you know, I want to go out there and win it. I think the feelings will still be the same inside. You just won’t have the crowds to feed off of. Sometimes the crowds help me stay focused with what I’m doing.

G: When you and Rory won at the end, there was an air high-five. What was that like? You couldn’t give him a hug or a high-five.

DJ: That was definitely different. I mean, I wanted to give him a high-five, but obviously in this time that we’re all facing right now, it’s just not proper. Even though we all were tested twice, everybody was fine, but still – proper social-distancing.

G: On one of the holes, cameras showed you cleaning a sand trap with your foot, as there weren’t any rakes. How different was that?

DJ: It’s not that weird, because playing at home all the time you do it; even though you have one of your club caddies with you, you still smooth out the bunker with your foot a little bit. So that’s not really strange. It’s strange not raking it properly, but I’m kind of used to cleaning out the bunker with my foot, whether it’s when you’re practicing around in a bunker or on the chipping green or playing at home. Especially now since none of the golf courses leave rakes out.

G: What was it like carrying your own bag?

DJ: It was different, but, it’s funny, I don’t think I’ve carried my bag since – I think the last time I hoofed it was Walker Cup in ’07, the last time I carried the clubs on my back. Maybe I could have done it once or twice in Ireland, I can’t really remember. It’s been a while since I hoofed it myself, but it didn’t feel like it wasn’t weird or anything like that just because I’ve done it so many times. It felt like it was last week that I was carrying my clubs in a golf tournament.

G: On Sunday, on 18, it looked like you hit your drive, then you started to walk before you realized you needed your bag. What was that something you were thinking, ‘Oh, man!’

DJ: (Laugh.) Yeah, well, the other guys had left their bags farther up, and I had brought mine back to the tee, and I forgot that I brought it all the way back to the tee. I only went a couple steps before I realized it.

G: It seemed when guys were done hitting their shots on Sunday you were ready to go. Was that something you planned to do, or is that how you naturally like to play?

DJ: For me, I use the time when the other guys are hitting, and obviously it helped we had lasers so we had the yardage and then all it is is picking which club you want to hit. I’m generally always ready to go when it’s my turn.

G: Did you feel a little rusty out there at all? Before Sunday, when was the last time you played?

DJ: I played a few holes on Saturday. I played five holes at Seminole; we got rained out. I played a couple of times that week, but not enough – I was definitely rusty. It’s time to start grinding here to get ready for Colonial.

G: How quick do you think it will take for you to get ready once play does start?

DJ: I know what it takes to get ready to compete in a PGA Tour event. I plan to be ready when the bell goes off on Thursday.

G: How important is it for the country that you guys do get back out there?

DJ: I think it’s important for sports to get back. Obviously it will come in phases as we get through this pandemic that we’re all going through right now. We’re starting to get to the other side of it so as things start to come back to somewhat normal, I think it’s important. Everybody loves sports, whether you play it or watch it – it’s a part of a lot of people’s lives, and it’s a very important part of people’s lives.

G: What’s your prediction for the match on Sunday?

DJ: I think it will be another good match. Are they doing match play, too?

G: They are doing four-ball for the first nine holes and alternate shot for the second nine holes.

DJ: Oh. So that will be a little more interesting. Peyton and Brady, I think they’re pretty similar golfers. I would probably give a little edge to Tiger because it’s his home course.

DJ: It’s like any golf course, if it’s windy, it’s going to play tough. Obviously it gets a nice breeze being so close to the ocean. It all depends on the wind. Wind can make an easy golf course play difficult depending on how strong the wind is. It’s a challenging golf course. If they play all the way back from the Tiger tees, it’s really long. It could be really difficult. Obviously it will be in really good shape, and there are a lot of nice grens. It will be a good challenge.

G: If someone is tuning in just for 15 minutes, what hole should they watch? What’s your favorite hole?

DJ: Oh, wow. All 18 are really good. Eleven is a driveable par-4, but it’s a blind tee shot. You got to know where you need to hit it. Seven is a fun par-5, reachable. Seventeen and 18 are great, too.

G: Playing in a skins game like you did, they lend themselves to betting. Do you have a good gambling story from out there?

DJ: I don’t. Not that I recall. I’ve played in a few matches. But playing for waters.

G: Are you planning to play the first week back for the Tour?

G: Do you feel safe with the Health and Safety Plan that’s been developed?

G: How did you get involved with BodyArmor sports drink, especially when there are other options out on the market?

DJ: Several years ago, I began trying to watch what I eat. I heard about what they were doing, and it was easy to join up with them. They make such a great product. It’s all natural, no additives, lots of vitamins and minerals. It goes along with what I’m doing. And it’s important to stay hydrated on the golf course. It’s been exciting to watch them grow.

G: I saw a few weeks ago that you posted a video on Instagram where you hit a ball off a BodyArmor bottle. How many takes did you need?

DJ: Just one shot. I hit it pretty nicely.

G: Was there any drink left in the bottle? Were you able to drink any?

A gentleman's game: Like his Bond character, writer Ian Fleming had a love affair with golf