When Nike decided to get out of the golf equipment business last year, they didn’t give up on footwear for the sport, instead going all-in on golf shoes. In particular, Nike’s Air Jordan line of golf kicks have been wildly popular, and now they’re releasing a new model just in time for the holiday season. You can buy them on Nike.com and in Nike stores today. 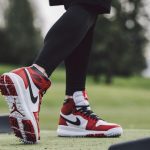 This week Nike announced the release of an all-black, “murdered out” version of the Nike Air Jordan 1 Golf Premium shoe. The attractive new spikeless treads include an antique leather upper, which Nike says “transforms to develop a beautiful patina” after it’s worn. Nike originally released the Air Jordan 1 Golf Premium model in February of this year. The originals had a red-and-white color scheme, just like Michael Jordan’s longtime team, the Chicago Bulls. They debuted 30 years after the release of the original basketball version of the shoes.