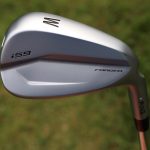 Ping's i59 iron was released earlier this year.

Ping’s i59 was released earlier this year as a replacement for the iBlade, which made most recreational golfers assume the ever-popular iron was being sunsetted after a five-year run. But if you ask Ping Tour rep Kenton Oates, i59 and iBlade can still co-exist in the company’s iron ecosystem.

“[i59 is] a great, unique product for us,” said Oates on GOLF’s Fully Equipped podcast. “It’s something we’ve added to our line. From a marketing standpoint, it probably replaced iBlade, you would say, but I kind of look at it as an addition.”

Oates spends an inordinate amount of time on Tour working with some of the best players in the world, including Tony Finau and Viktor Hovland, so he knows better than most how an iron is supposed to perform for different golfer types. When it comes i59 and iBlade, they offer two different benefits depending on your preferences and needs.

“The iBlade was always a high launch, higher spinning product for us, and i59 is kind of the opposite way,” Oates said. “For a guy like me who played Blueprint, to be able to play an i59 was awesome. I’m not getting that lower flight and spin rate that I love, but I’m getting an iron that’s super forgiving, where I can miss it with my 7-iron and not lose all that ball speed and flight. It’s going to be a home run for us in that regard.”

Oates’ insights align perfectly with what GOLF.com equipment team saw during recent on-course testing with the irons, where the i59 5- and 7-irons produced roughly 300-400 RPMs less spin with a slightly stronger flight.

While spin is certainly your friend in some cases, some higher swing speed players tend to overspin the ball — particularly on mishits — leading to an unplayable flight and inconsistent carry yardages.

“For the higher spin golfers who don’t have that face control, you get that reduction in spin, but it’s also so forgiving for the package it’s in.”

Having an iron package that offers a built-in lower launch and spin rate, along with a bump in forgiveness, could be an immediate win for the golfer who already struggles to manage both variables. The iron is already trending upward in the professional ranks, and it could earn a spot in your bag as well.