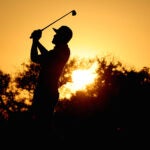 As the 2021 PGA Tour event schedule draws to a close, it’s that time of year when pro golfers begin conducting their serious off-season equipment testing. While players test gear and make changes throughout the year, most of the wholesale changes to their equipment setups happens between November and January.

For amateur golfers who are similarly looking to test new equipment before the start of next season, now is the time to get educated about gear testing.

What things should you be looking for, and what pitfalls can you avoid?

Specifically, for this article, we’re discussing iron testing and how you can properly decide on which iron models may be right for you.

On our recent Fully Equipped podcast, guest Kenton Oates – a Ping tour rep who fits PGA Tour players for their equipment – said one of the biggest gear mistakes he sees amateurs make is with their irons. When looking at launch monitor data during an iron testing session, many golfers default to looking at “spin” and “distance” as deciding parameters.

And that’s understandable. Most golfers have heard that there’s a certain spin window that each iron should fall into, and everyone wants more distance, right?

According to Oates, however, golfers may be focusing too much on the wrong things. Instead of trying to hit certain spin numbers and maximum distance, look to create more height, a steeper landing angle, and tighter dispersion patterns.

To create a steeper landing angle, a golfer will need to hit the ball higher into the air and with more spin. While this flight trajectory isn’t always best for optimal distance, Oates’ argument is that hitting the golf ball farther with your irons isn’t necessarily the goal.

The ultimate goal with iron testing, rather, is to find a set that will produce the most consistent and predictable dispersion patterns, and get the ball closer to the hole.

“The common number that gets thrown around is you need to spin your 7 iron at 7,000,” Oates told Fully Equipped. “There’s so many different characteristics. Like Tony Finau could probably spin his 7 iron a little less than Joaquin Niemann, simply because Tony launches it at 18 (degrees) and Niemann launches it at 12.

“If I was fitting for amateur players, I would make sure, number 1, you have enough spin and enough height. If you’re going to err, err on the ball going shorter with your 7 iron with more launch and spin, rather than farther with less spin…if you swing it slower than (pro golfers) you’re actually going to need a steeper landing angle to make sure the ball stops…

“Don’t judge your 7 iron based on the fact you hit it 163 yards and you hit another one 155. A 7 iron is supposed to be hit into a little tight pattern at a pretty steep angle.”

When you’re hitting an iron into the green, the main objective is to get the ball as close to the hole as possible. That means you want to hit the iron that has the most predictable ball flight for the shot at hand, not just the iron that’s going to go the farthest. You want the ball to drop into a bucket, not rocket over the green.

For many amateur golfers, that could mean picking the iron that creates more height, not necessarily more total distance.

The best way to make a decision with iron testing, of course, is to see a trusted professional fitter. Breaking down data can be a complicated task, so consulting a professional is often the best course of action.

Either way, happy testing! The process of experimentation should be fun, and hopefully it can improve your scores, too.