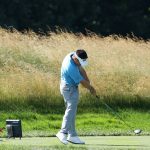 Just bought some new balls and was trying to figure out yardages. How can you accurately find numbers when you go to the range and are stuck hitting nothing but range balls? — Toby Pirihi

This remains a major conundrum for almost every golfer. For those not in possession of a Tour card, your range balls are likely black, yellow and hard as a rock. They serve a purpose when you’re trying to knock the rust off before a round, but it’s difficult to obtain accurate numbers with each iron or wedge during a grind session.

If your home course is a local public track, I’m willing to bet there are a few cracked and well-worn balls laying around. There’s literally no chance you’re getting decent numbers with those pellets, so you’ll need to get creative.

Before I offer a few suggestions, let me reiterate that you should be looking at carry yardages with those new balls. That’s how far the ball is carrying in the air before touching down on the turf. Not where the ball ends up after rolling another 10-15 yards on a baked-out range. Pros have a carry number for each club in the bag, and you should as well. (This concludes your weekly carry yardage PSA.)

So what’s the plan of attack? If you have deeper pockets, I’d suggest investing in a portable launch monitor and practice net. Many of the devices you see on Tour cost $10,000-plus — a number that’s difficult to swallow for a large majority of the golfing population. Luckily, a few companies have released units that run around $500 and can easily fit in your bag. It’s the cost of a new driver, but it’ll allow you to dial-in carry numbers through the bag in no time.

Another suggestion is to snag the last tee time of the day and work on approach shots from some of your favorite yardages. I still conduct on-course head-to-head testing this way. For example, I’ll hit five of my current ball against five of the challenger from 150 yards and take note of where they land. If the new balls are on the back of the green, you can assume they’re longer, which might require you to make some adjustments.

I’d recommend conducting this testing on one of the flattest greens on the course so you don’t have to worry about significant rollout. Just make sure you sand all divots and repair ball marks before heading to the next hole.

Linking up with an instructor at your local club or a club-fitter with a launch monitor is another way to establish your carry numbers without having to pay full boat for a unit. This is probably the easiest and most economical suggestion.

If you’re dead set on conducting testing at the range, call your local course and see if they’ll let you pick your own balls. You’ll likely need to be the first or last person on the range to make it happen, but it’s worth a shot. And while I don’t condone playing refurbished balls, you could always buy a large used supply of your new ball and eat the cost in the name of range testing.

Also, if you’re going to conduct range testing, be aware that astroturf is going to give you lower launch and spin numbers when compared to turf. It’s just another thing that needs to be taken into consideration as you search for a spot to conduct ball testing.