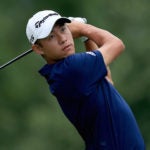 When you’re an elite tour pro, it’s good to have options in the gear department. Two lob wedges with different grinds and a couple utility irons to handle specific course conditions are common sights. But what about a pair of hybrids with identical lofts? It’s an uncommon setup that’s worked well for Collin Morikawa since he started toting around a 19-degree TaylorMade SIM Max hybrid the week of the Waste Management Phoenix Open.

Morikawa had never used a hybrid prior to Phoenix, preferring to rely on a utility 2-iron near the top of the set. Hoping to find something to attack the par-5s, Morikawa gave the hybrid a shot — and wound up recording four eagles during the final two rounds of the event.

He was hooked. Morikawa still brings the 2-iron out when the situation calls for it, but like Dustin Johnson — who won the Travelers Championship with two SIM Max hybrids — the now-two-time PGA Tour winner has taken a liking to the hybrid, to the point that he now has identical 19-degree SIM Max hybrids to choose from based on the setup.

According to TaylorMade’s manager of player development, Ryan Ressa, Morikawa will select his hybrid based on ball flight. When he needs more launch, Morikawa opts for a 19-degree equipped with Mitsubishi’s Tensei Blue 85 shaft; and when the setup requires something with a more penetrating flight, he has a 19-degree with Mitsubishi’s Tensei White 100 shaft at his disposal.

At Muirfield Village Golf Club, Morikawa opted for the hybrid with the Tensei White 100TX shaft to attack the layout. Depending on how the course sets up this week for the Memorial — it’s likely to feature tougher conditions than the Workday event — he may switch things up to fit the conditions.

In Morikawa’s case, it’s good to have reliable options.

It was the return of two clubs Brooks Koepka and Gary Woodland used to win major championships in the last year. Unable to find a driving iron that checked all the boxes, Koepka reinserted his trusty Nike Vapor Fly Pro 3-iron. Woodland dropped the Wilson W|Labs prototype driver he started using at Colonial and returned to Ping’s G410 Plus driver.

Chase Seiffert’s best Tour finish since the 2018 Travelers Championship (T9) just happened to come with a fresh putter in the bag. Hoping to improve his alignment, Seiffert worked with Odyssey Tour rep Joe Toulon on a Stroke Lab Ten mallet that was built an inch longer than his usual specs. A former belly putter user, Seiffert took to the longer length and felt as if his arms were more connected. Seiffert finished solo 4th while ranking 4th in Strokes Gained: Putting (plus-6.763) for the week with the new wand.

The ball switch marked the first time Snedeker has ever played a Titleist in medal competition — he played a Pro V1 at the 2019 Dell Match Play — as a professional.

Quick-hitters: Matt Kuchar switched into Fujikura’s Ventus Black 6X from ATMOS Black 6S. … Jason Dufner is the latest high-profile pro to be spotted with Axis1’s Rose mallet. … TaylorMade’s P7MB prototype irons surfaced in England. … Steve Stricker put Titleist T100 irons (5-PW) and U500 3 and 4 utility irons in play. The T100’s made an appearance earlier this season before they were eventually replaced.