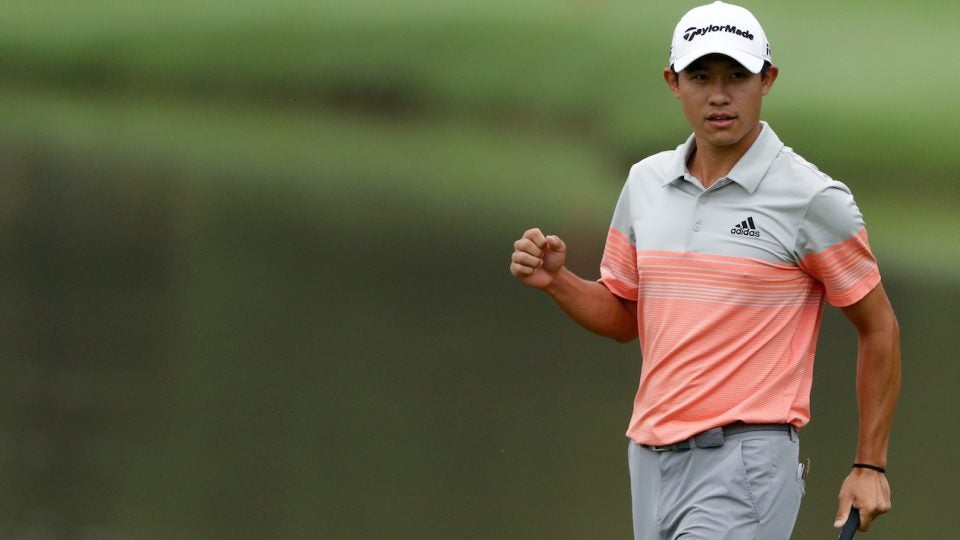 Rising star Collin Morikawa wasted little time locking up his PGA Tour card for next season. Less than two months after he turned pro, Morikawa closed with three birdies in Reno to win his first Tour title. The victory was a boon for not only Morikawa but TaylorMade as well, who signed the 22-year-old to a multi-year equipment deal in June.

Coming off his maiden tour win, Morikawa spoke with GOLF’s Jonathan Wall about his decision to sign with TaylorMade, the meaning behind the breakfast items stamped on his wedges and equipment-testing plans for the offseason. (You can listen to Morikawa’s entire interview in the latest Fully Equipped podcast.)

What was it about TaylorMade that made you believe they were the best fit when you turned pro?

For me, it was a club company that I trusted, and I’ve trusted them for years, you know? So, it wasn’t really that hard of a decision. It was something that, I knew the clubs that I’ve been using have brought me to this point, so why switch from there? There’s no need to add an extra variable of wondering what this driver might miss like, or what these irons are going to do. I just feel comfortable when I have their clubs in my hand, and I know what it’s going to do. That just makes part of the process of playing golf a lot easier.

Did you talk to any players to get their take on TaylorMade, from a pro perspective, before making a decision?

Morikawa: Not really. And whether a bunch of us, and all of us sign with TaylorMade, or just me, I think I needed to focus on what was going to help me the most. And, obviously, there’s testing that goes on, and that’s what I used part of my senior season for, and senior year of college, is to just look at what’s out there. But, at the end of the day, the things that I already have in my bag, all the TaylorMade clubs, and everything that I know TaylorMade does with their new clubs, and every single year, with the innovation, it’s just something I want to be a part of.

Max Homa, who’s also a Cal guy, recently called you a “robot” because of how insanely accurate you are with your irons. And I heard back in college you had a testing session that revealed your dispersion pattern with a 6-iron was as good as most elite players with a pitching wedge. What’s an iron testing session like?

Morikawa: It’s just a lot of figuring out what feels and looks good to me. I think, obviously, there’s a bunch of technology with TrackMan, and all of the different launch monitors, that help tell you what is best. But, for me, it’s a lot about what is going to come out from that initial window of hitting that ball. And am I going to like that?

It’s a lot of feel-based stuff. It’s got to start from there. It’s got to feel good off the face, it’s got to look good [at address]. And then, obviously, it’s got to perform. But in those iron testings, obviously, I’m just trying to hit the best shots I can. I love to hit my little five- to 10-yard cut, and that’s what I try to do. And I think that’s kind of been my game. My ball-striking has been the center of my game for a long time now. And being on the PGA Tour, you’ve got to have a well-rounded game. So, that’s what we’re trying to work on, every little aspect that’s just not up to par.

Irons
LISTEN: What it’s like to test irons with elite ball-striker Collin Morikawa

Because your iron game is such a huge strength, are you less inclined to tinker with those clubs once you find something you like?

Morikawa: No, I mean I do like testing new stuff. But when I do find something that’s good, like these [TaylorMade P730] irons, I don’t want to waiver too far away from them. I’ve found something that I really like, and that’s something that I know feels good, I know what it’s going to do. And that’s what’s cool about these irons, is that they just perform, and they give me the exact shot shape that I want to see.

But if an iron doesn’t work, or if it doesn’t feel good, I will switch it out. I’m messing around with a [P750] 6-iron, this week. Just to see if I can get a little more height, just a couple more yards. Just to fill a gap.

So you’re totally fine swapping out a single iron?

Morikawa: Yeah, it would just be that one club. I’m okay tinkering with things. If it fits that window for where it comes out off of my initial impact, I’m all for it, and putting it in. I’m going to trust it completely when I go out there. I’m not gonna put something in that I don’t believe is going to help me in the tournament. When it comes Thursday, I want to be fully prepared. I want to know how things are going to react. And if they’re not reacting that way the day before, then I stick to what I’ve been using.

Was there any sort of difference between the testing sessions you went through in college versus when you turned pro?

I think out here we’re able to tinker a lot, we’re able to check our lofts, check our lies, every single week with the TaylorMade Tour Truck. And then, I think that’s what’s cool is that everything we need to have at the beginning of the week, to make sure our set is exactly the same, we have that availabile. And I’m thankful to have these guys seeing if I need anything — whether it’s a tweak or an extra grind on a wedge. They’re all for that.

I saw you have a bunch of brunch-related items stamped all over your wedge heads. I’m gonna assume that you’re a big brunch guy. How long have you had those wedges?

Morikawa: Yeah, those were added at the US Open. My girlfriend and I have some nicknames that might, or might not, be on those wedges. I’m sure you could look through my Instagram, and you’d find a post that you guys will hit the spot.

Love the smell of wedges in the morning.

We’re big foodies. We love all meals of the day, breakfast, lunch and dinner. But we just happened to kind of stumble on some breakfast items that we wanted to put, and I’m glad people are seeing it, because I think it’s pretty cool. My girlfriend loves it. But, yeah, who knows what’s next? I used to have a lot of different types of steak on my wedges, so it could be a surprise on what kind of food is next.

I noticed you have TaylorMade’s M5 Rocket 3-wood in the bag, which is a slightly stronger lofted version of the one that a lot of people are used to seeing. Any particular reason why you preferred the Rocket version over a standard head?

Morikawa: I think I’ve always used a lower-lofted 3-wood, and I’ve been able to get the ball up. And, for me, I love having the versatility of it in the fairway, as well as off the tee. There’s a lot of different holes out there where you’re going to need a 3-wood, and I like hitting my 3-wood very deep, if it knuckles and goes pretty far. I love having that feeling, and some guys don’t. But that just kind of fits my game, and fits the gap of my distances.

Do you keep the loft stock on the 3-wood? I believe it’s usually 14 degrees.

Morikawa: I actually moved the loft a notch higher than I had it during the [3M Open], right before the tournament started, just to add a little more spin to get it into the par-5s, and it’s been amazing. I used the AeroBurner for the longest time, and that was about 13 degrees, as well. So, it was just an easy transition to put the same shaft in, and just a new head, with some new technology, that just worked out perfect.

How much did it help just to have TaylorMade’s blessing to just kind of play what you wanted to play to help secure your card?

Morikawa: I was obviously very thankful for them to let me do that, and just to make this first month and a half, two months, just a little easier. But the majority of my bag is TaylorMade, and I look forward to putting everything in for TaylorMade. I’ve already started testing some things. I have a 4- and 5-iron that’s a Callaway now. I didn’t put that in until about February this year, and I was using a TaylorMade 4- and 5-iron well before that. It was just something I found with a little different launch. We’re working on a P760 there to fit that gap, and to find that right launch. I think we’re pretty close.

What kind of plans do you have, if at all, to continue to test more during the off-season?

Morikawa: I look forward to continuing to test out the Hi-Toe [wedge]. I love it out of bunkers. I think it is the best wedge out of bunkers, and especially the long rough. It just adds an extra little forgiveness out there. So, I think testing that out, testing out some new grinds on the wedges, the new Milled Grind, too. When I was able to look at that face when they first showed it to me [at the 3M Open], it’s the coolest thing. You’ve never seen anything like that on a face.

And then, I’m looking forward to trying out the balls. I actually spent all of my winter during my senior year at college testing out the TP5x ball. In college, we did have to play the Pro V1x. But I love the [TaylorMade] ball. I thought it performed amazing in the wind. There was a little different feel, but I think it’s just something that I play with for a few weeks, it’s going to be a quick transition.