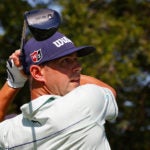 Gary Woodland tees off at the Charles Schwab Challenge.

A slimmed down Gary Woodland recorded a ninth-place finish on Sunday at the 2020 Charles Schwab Challenge. His 25-pound weight loss transformation wasn’t the only major change Woodland made during the PGA Tour’s 13-week hiatus, though.

It’s a significant change for both Wilson and Woodland, because the company has openly expressed its goal of getting a Wilson driver in Woodland’s hands. He signed a 10-club equipment deal with Wilson in January 2019 after putting the Wilson Staff Model blades on the map, but a change to a Wilson driver never stuck. Prior to the 13-week layoff, Woodland was using a Ping G410 driver in competition.

At Colonial, however, Woodland played the Wilson “WLabs” driver (Accra shaft) en route to a top-10 finish. He was also using a Wilson prototype fairway wood (Graphite Design Tour AD-DI shaft) that had a very similar look to the driver.

This could be a sign of things to come for Wilson in the metalwood category. Wilson’s current Tour staff includes Kevin Streelman, Brendan Steele and Padraig Harrington, but none of those players use a Wilson driver. With a new prototype option at their disposal, however, maybe the tides are turning for the company.

We’ve reached out to Wilson for more information on the products, and we will update this story if they respond with comment.