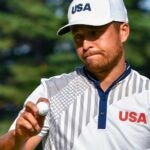 Xander Schauffele’s win in Tokyo came on the heels of an equipment switch that might have salvaged his gold medal chances.

Xander Schauffele’s gold medal win at the Tokyo Olympics was in the bag … and then it wasn’t.

The 27-year-old American stood on the 18th tee at Kasumigaseki Country Club in Tokyo’s Saitama prefecture clinging to a one-stroke lead. A simple par on the 500-yard par-4 would have been enough to vault him to the gold medal, clinching unquestionably the biggest victory of his career to date — the sort of win that would help to shift some of the nagging narrative on Schauffele’s career as one of the best players yet to win a “big one.”

Of course, this Olympic competition wasn’t quite a major championship. A limited group of only 60 players comprised a field that closer resembled the Safeway Open than the U.S. Open. But good luck convincing Schauffele the stakes were any lower, particularly as he clutched his driver on the 72nd tee box.

It was in that moment, on the 72nd tee, that the California kid briefly lost his cool; hitting a straight block, leaving himself short-sided into a tricky green. Suddenly, a nonchalant finishing hole had become a recipe for disaster.

But then something funny happened: Xander solidified. He punched his second shot back into the safety of the fairway (and away from yawning water that could have met another right miss). He threw a dart on his third shot, sucking it back toward the flagstick and leaving only a kick-in for the gold.

Now, the *big* headline from that moment — Xander rising to meet the pressure — was fairly obvious. But a smaller one resonated through the hallways of Schauffele’s equipment partner, Callaway, on Sunday.

Not long prior to the Olympics, Schauffele underwent a slight equipment shift, swapping out a Callaway Chrome Soft X ball for the company’s new Chrome Soft X LS. The LS, which stands for “low spin,” has been utilized in a handful of Callaway technologies in recent years (including Schauffele’s Epic LS driver). The goal of the LS products is to help players reduce spin rates in order to boost distance and control.

Using the Chrome Soft X LS, Xander saw his spin rates drop by close to 200 RPMs throughout his bag, helping to bring him into numbers he felt most comfortable executing shots in.

To learn more about Schauffele’s Chrome Soft X LS golf ball and how it might be able to help you drop spin and boost control, check out the link below.