Here’s how you can own Tyrrell Hatton’s controversial hoodie 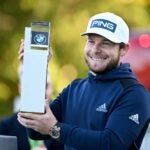 This weekend, Tyrrell Hatton won a golf tournament and started a war. Those are words we typically reserve for rules controversies, scoring gaffes, or worse yet, etiquette infractions. But surely, the BMW PGA Championship on the European Tour couldn’t have exploded into the North American golf conscious on the same weekend as a major championship for something as silly as an etiquette infraction, right?

No, the BMW PGA Championship exploded into the North American golf conscious for something far more trivial. En route to victory, Hatton found himself embroiled in the golf controversy to end all golf controversies: hoodie-gate. The 28-year-old Englishman ignited golf’s two warring factions — hipsters and white-belters — when he elected to add a hoodie to his on-course attire for each round at the BMW.

Hoodies are a beloved part of our cold-weather wardrobes, but where do they belong? At home, say the white-belters, who have spent years defending the game’s traditions; dress codes chief among them. On the golf course, say the hipsters, because golf attire is a made-up idea anyway.

I won’t bother keeping score for either side. Both presented their brash, unadulterated opinions on whether Hatton’s wardrobe decision was, in fact, good in the hood. Both sides made salient points, both made good jokes, both made bad jokes. Ultimately, we’re all winners for arguing over a piece of fabric, because passion is what makes golf great, right?

But lost in the weeds of this *serious voice* very important golf argument is a single, unassailable truth: the hoodie actually worked. Hatton won the BMW PGA Championship. And he did it while wearing a hoodie. If he did it because of the hoodie or despite it depends on your perspective, but the hoodie factored into his victory in some way, that much is unquestionably true.

So, whether you’re sticking it to the white-belters, proving the hoodie is no better than a cardigan, or (like me) in the market for some fashionable cold-weather gear that won’t completely constrict your golf swing, it’s worth your time to take a look at golf’s most unintentionally controversial clothing, the Adidas Cold RDY Hoodie. This sporty hoodie from Adidas golf is a great layering piece on or off the course. It features Cold RDY technology for insulated warmth, moisture wicking, UPF 50+, water resistance, and stretch.
Explore the Pro Shop Sold out

The specific design worn by Hatton has yet to be released to the public (check back with GOLF.com, we’ll have details soon), but you can get your hands on the same exact technology that warmed his way to victory this weekend now. Adidas’ RDY technology is built for maximum temperature control, allowing golfers to move freely and comfortably without excess bulk.

Insulated warming technology and stretch fabric make this the perfect “performance” hoodie, giving you the freedom to move and bend without feeling restriction from your swing or those pesky dress codes. With the Adidas RDY hoodie, the only question you’ll have is whether it’s worth wearing away from the course, too. Best golf gifts: 10 gifts to splurge on for the diehard golfer in your life