‘Absolutely disgusting’: Why the Tour’s best putter is berating himself at the Masters 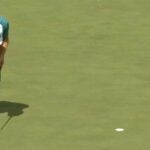 Tyrrell Hatton examining his line after a missed putt on Augusta National's 7th green on Friday.

AUGUSTA, Ga. — If there’s one part of Tyrrell Hatton’s game that gave him an edge this week at Augusta National, it was his putting.

So, yeah, Hatton had every reason to be bullish about his chances on what are some of the game’s most beguiling greens.

Through five holes in his first round, Hatton had every reason to continue feeling that way, a stretch that included a two-putt-from-30-feet par at the 1st and a jarred 10-footer for birdie at 2.

Then came the par-3 6th, where Hatton left himself 50-plus feet up a hill to a flag perched on a knob. His first attempt trundled up the slope, stopped at the crest, then started to roll back toward him. When his ball finally came to rest, he had an even longer putt — call it 70 feet — left for par. Determined not to make the same mistake with his next putt, Hatton ran his par try 15 feet by. Two more putts later, he had made a four-putt-double-bogey 5.

Hatton settled down and played the remaining 12 holes in two under, but his putting woes were just beginning.

In the second round, the untidiness started early. He missed a 12-footer for par at the par-4 1st, which led him to swat in frustration at his putter head. At the par-4 7th, he missed from about 10 feet. Bogey. As his ball rolled by the hole, he bent over and stared incredulously at a point on his line, as if a spike mark had redirected his putt. On the par-3 16th, another miss, this one for bogey from 12 feet. As he addressed his ensuing putt, he wound up and took a mighty practice swing, better suited for a driver than a putter.

Our man was running hot, which to Hattonphiles wouldn’t have come as a surprise. Self-expression — especially when things aren’t going swimmingly — has long been another of Hatton’s talents. His most recent viral-ready outburst came at the Players Championship last month, where after barely missing a putt in the third round, he dropped his putter, extended his arms over his head and cried, “Are you f—ing kidding me?!”

Nothing was dropping for Hatton on Friday and that didn’t change at the par-4 17th where he lipped out for bogey from 8 feet. On the walk to the 18th tee, he slid his putter into his bag with vigor.

Hatton’s second-round tally: a two-over 74 that dropped him to two over for the week, 10 back of the leader Scottie Scheffler.

Hatton’s self-assessment: “If anyone has worse numbers than me on the greens this week, I would actually feel sorry for him, because my putting this week is absolutely disgusting.”

Masters stats are limited but the tournament does make public Putts Per Hole. At the very bottom of the list, just as he surmised, is Hatton’s name, next to a “1.83,” two-tenths of a point behind Bernhard Langer.

“I didn’t think my score could actually be any worse than what it is, to be honest,” Hatton said. “I hit it lovely yesterday, and then we had a few bad moments today. Obviously, it’s tough out there, but I’m not in a good mood. I’m so frustrated with these greens. It seems every year I play here, I just never hole putts, and this year has been the same.”

“I’ve wanted to bury my putter several times,” he said. “It’s definitely a love/hate relationship, and there’s a lot of hate at the moment.”

Could the love return on Saturday? It could! Putting is a maddening craft, never to be mastered, even by the best putter on the planet. As Hatton himself said after a round he’d rather forget, “Tomorrow is a new day.”