Why this Masters competitor was spotted carrying his own bag 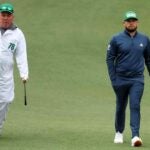 Tyrrell Hatton and his caddie, Mick Donaghy, during the third round of the Masters.

Tiger Woods wasn’t the only Masters participant struggling with an injured leg this week at Augusta National.

Tyrrell Hatton’s caddie, Mick Donaghy, was tooling around the hilly layout on a bum knee.

“This is actually his last event for a while,” Hatton said of his looper on Sunday afternoon. “He is going to go home and see a doctor and find out what the next step is for him. Obviously, at this moment we don’t know how long he won’t be able to caddie for.”

Donaghy insisted he was able to fulfill his duties next week at Harbour Town, which is a flat course, but Hatton wouldn’t have it. No point putting more stress on the knee.

“He has had the issue for quite a long time, so I said I would rather he just gets home, sees a doctor, and the sooner that he has a diagnosis on it and what the relevant steps are to move forward,” Hatton said. “Obviously hopefully he is not out for too long, but for his sake, he needs to get it right before he comes out.”

That much was clear this week, on a course with climbs that cumulatively equate to 50 stories.

“A tough walk for even the fittest caddies,” Hatton said. “Obviously, the bags are pretty heavy, and with the slopes that they’re walking up and down, it’s tough. He struggled to get through four days.”

Earlier in the week, Hatton lightened his caddie’s load, taking the bag from Donaghy and toting it up the hill on the par-5 8th. On Sunday, Hatton took on more looping duties, when he lugged his own bag down the par-5 2nd, after he’d played his second shot out of the fairway bunker.

Hatton, who was paired with Billy Horschel in the fourth round, said in that instance that he was merely trying to help keep up pace of play. “[Donaghy] was raking where I went in the bunker, and then he also raked Billy’s mark,” Hatton said. “So it was just a case of just getting down there.”

Albeit with a 50-pound bag slung over his shoulder.

It was a tough week for Hatton who shot 80 on Sunday and finished at 17 over par, in last place among those players who made the cut. After his round, he explained that not only does Augusta National not suit his eye but it also doesn’t reward good shots.

Still, Hatton seemed to take his struggles in stride, joking, “Maybe I’ll be better off if I come back being a caddie here rather than trying to hit golf shots.”