Putting a set of blade irons in the bag comes with a dream. That dream is filled with flushed shots that dance around tucked flagsticks as the sun reflects just perfectly off their beautiful, no-nonsense chrome finishes.

When a blade iron is hit precisely on the sweet spot, there’s a feeling of nothingness at impact as the ball sails toward the target. It’s heavenly.

However, blades—also commonly called forged muscleback irons—have a darker side. Contact one just a fraction off-center and you’re left with tingling fingertips and an errant ball flight.

Some golfers view blade irons as a stamp of approval that they’re good golfers, while others simply appreciate them as functional works of art. Due to those temptations, blades end up in golfers’ bags when maybe they shouldn’t.

“I know of no reputable clubfitter in the industry that would recommend a forged muscleback blade for a player over a 10-handicap,” says Tim Briand, senior vice president of GOLF Magazine’s sister company True Spec Golf. “An abundance of research on a multitude of platforms has proven that your ability to strike the ball in the same place on the face is reduced drastically as skill set diminishes.”

Due to their design—thin soles, thin toplines, reduced offset, center of gravity placement and overall smaller profiles—there’s a small margin of error for off-center strikes when hitting blade irons. Therefore, this category is reserved for high-level players who hit the sweet spot time after time. Not only that, blade irons are best utilized by high-speed golfers who create enough spin and height to hold the green and to execute curved shots with precision.

“For the same reason a blade is more difficult to hit, it’s beneficial for those who hit intentional bad shots, or shape shots,” Briand says. “Blades can help control distance or trajectory. If you’re a shotmaker, what you’re basically doing is intentionally mishitting shots, using variability in the face to intentionally make the ball curve.”

“I can’t play a blade,” Na says. “It’s too difficult, and I’m a pro golfer. I think a blade goes shorter. Off-center hits aren’t going to perform as well as cavity-backs. I don’t see a reason why you’d want to play a blade. I really don’t. I played blades in my early 20s, maybe one year—when I was dumb. But I’m wiser now and play a cavity-back.”

What about a happy medium? In recent years, many top-level golfers use blade short irons (where control is imperative) and cavity-back long irons (where forgiveness and distance play a larger factor). Mixed-iron setups, as they’re called, can help golfers find the best of both worlds.

Be careful, though, because there’s a danger with mixed sets, too. Since cavity-back irons are designed with forgiveness and distance-increasing characteristics, it’s possible that identically lofted irons from the two categories fly different yardages. This means that loft-gapping throughout the set can become difficult when combining blades with cavity-backs in your setup.

To offset this issue, golfers and club builders resort to bending irons to a certain loft. Remember, though, that bending irons weak or strong can affect bounce and overall performance of that particular iron. That’s why it’s best to either consult a professional clubfitter or seek an iron manufacturer that designs blade and cavity-back sets that match for this very reason; there are plenty of options available on the current market.

Also worth noting is that in the modern market, the lines between blade and cavity-back constructions have blurred. Numerous companies have developed irons that look like blades (Ping iBlade and TaylorMade P790 for example) but offer the forgiveness of their cavity-back counterparts. This in-between category is a great place to start if you’re considering blade irons but worry they’re not forgiving enough. 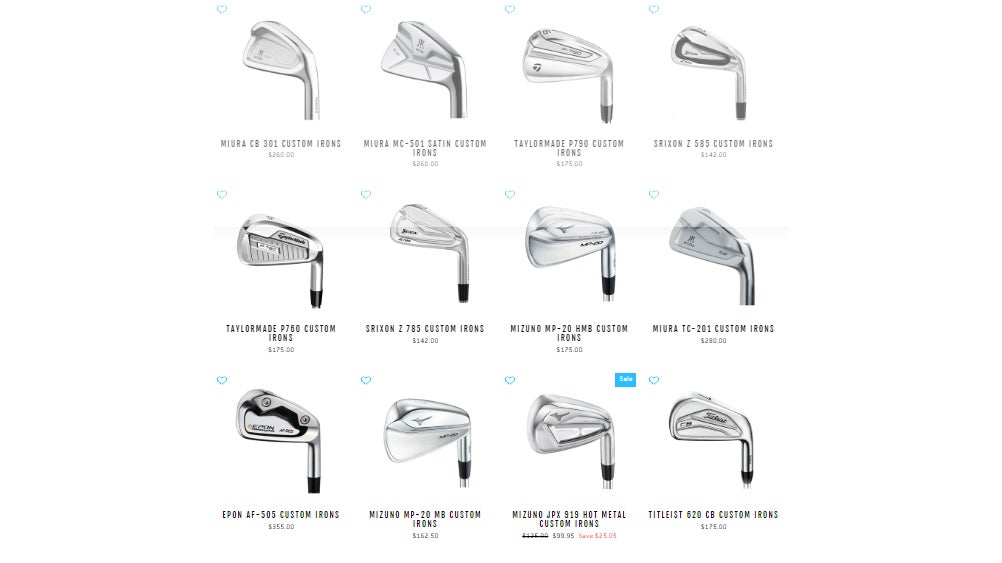 Get a brand-new set of custom irons from all the major club manufacturers.
BUY NOW