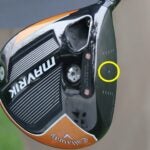 I noticed there is a white spot in the middle of the head of Phil Mickelson’s driver. Any idea what that’s all about? — Jojan Castelo (Instagram)

First off, nice catch. Unless you were looking closely at the photo GOLF.com colleague Andrew Tursky took of Phil Mickelson’s new 47.5-inch Callaway Mavrik Sub Zero, there’s a good chance you missed the small white spec situated in the middle of the face.

Is it paint left from an eviscerated tee? Or how about a way for Mickelson to tell his driver heads apart? Upon close inspection, I feel confident saying it’s actually none of the above.

If you’ll recall, the PGA Tour announced new driver testing protocol at the beginning of the 2019-20 season. The rules stated players would have their gamer driver heads randomly tested by the USGA’s Equipment Standards staff at select events. Outside of some early season chatter regarding failed drivers during the 2019 Safeway Open, driver testing has basically been a non-story.

Which brings us to Mickelson’s driver. Just because we haven’t heard about the Tour’s driver testing protocol in some time doesn’t mean it isn’t still going on behind the scenes. The dot you see on Mickelson’s head marks the center of the face for the USGA’s Characteristic Time (CT) test, which measures the springlike effect on the face from several possible spots where impact might occur. That, of course, includes the center.

Under the Tour’s current driver testing regulations, the USGA conducts random testing on non-competition days to determine if the CT is within the legal range. Results are delivered via a color-code system, as opposed to giving the actual CT numbers. “Green” means the club is conforming and suitable for play (or under 239 microseconds), “Yellow” means the club is suitable for play (240-257 microseconds) but pushing the USGA’s published tolerance and may be in danger of failing a subsequent test, and “Red” means the club has been damaged into a non-conforming state and can no longer be used (over 257 microseconds).

So there you have it! There’s a purpose behind the white dot.