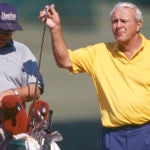 Arnold Palmer loved tinkering with his golf clubs, on and off the course.

When Arnold Palmer passed away in 2016, he owned an estimated 14,000 golf clubs, according to a GOLF.com article published the same year.

Palmer, nicknamed “The King,” was also the king of tinkering. His golf club workshop was his sanctuary, and he changed clubs and grips regularly. Palmer would often change his equipment setup from tournament to tournament, and as we recently found out, even from round to round.

Golfers such as Ben Hogan, Jack Nicklaus, and Tiger Woods are known to find clubs they like and stick with them for long periods of time. Players such as Palmer, or Phil Mickelson, on the other hand, are the opposite; they love to tinker with new clubs and constantly change things up.

Recently, on our Fully Equipped podcast, longtime club designer Clay Long spoke about his personal experiences with Palmer and his propensity to tinker.

According to Long, Palmer said that he once won a golf tournament using a different set of irons in each round of the event. Long didn’t mean that Palmer made a few tweaks to his club heads between rounds, or adjusted the setup slightly. No, Palmer used completely different sets of irons in each round. Hall of Famer Bob Goalby also once said Palmer won the 1962 Colonial event using four different sets of irons (presumably, Long and Goalby were referring to the same tournament).

That’s incredible! We’ve seen Dustin Johnson change drivers mid-event, and we’ve seen a Mickelson putter switch-up during a tournament, but a different set of irons in every round is on another level.

That was Arnie, though. Long says he once saw Palmer finish up on the 18th hole, then head to the practice range 10 minutes later with an entirely new set of clubs from his locker.

In case you missed it, make sure to tune into the entire Fully Equipped podcast with Long below where he tells some must-listen Nicklaus and Palmer stories. Enjoy!

Stand out from the crowd in these 5 statement-making gloves