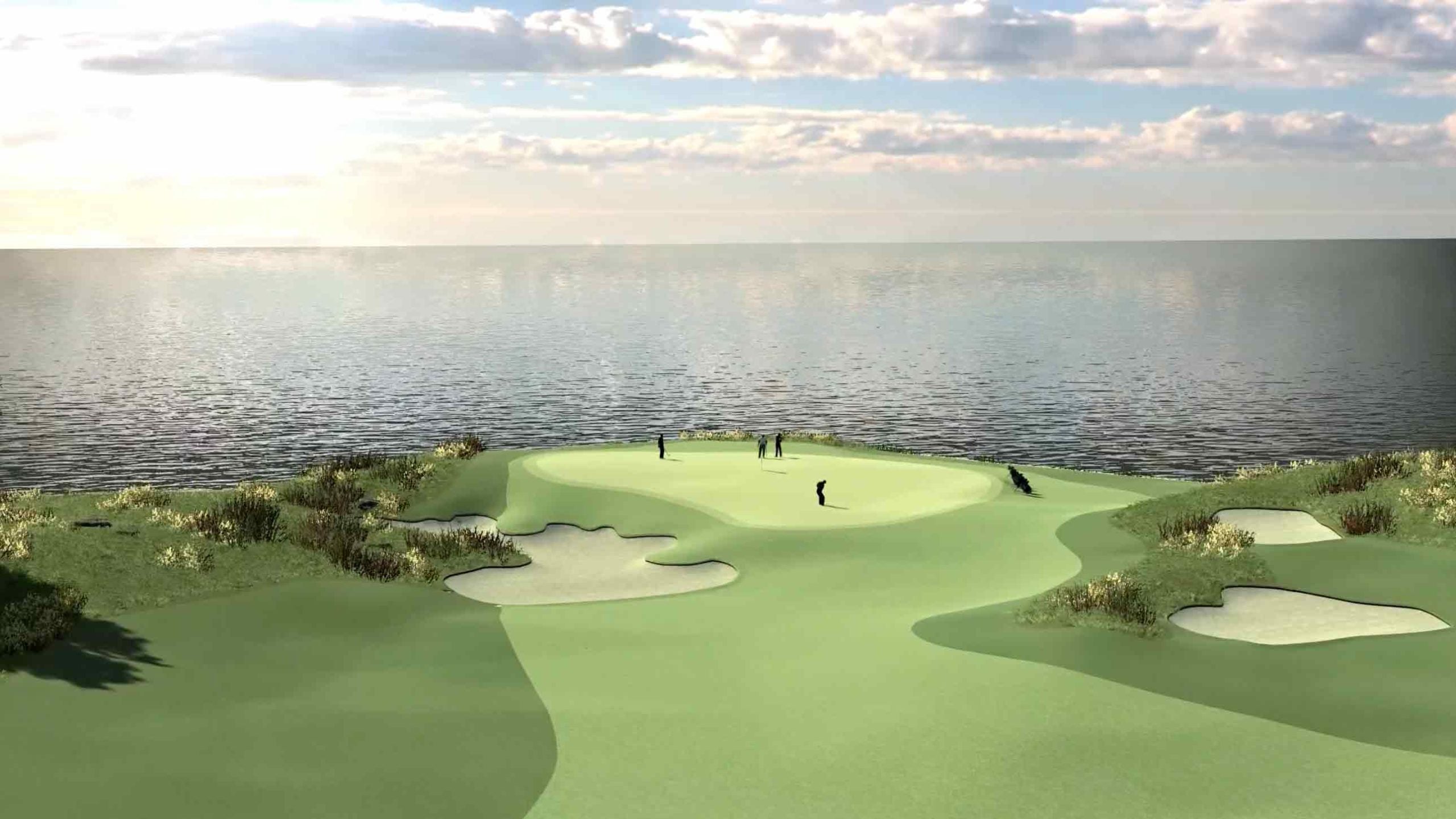 "Coastal Creep" in all its glory.

A golf hole is not unlike a work of art: It starts as an abstraction, a thought in someone’s head.

An involved creative process then brings it to life.

For a glimpse of this progression, we give you the character-rich par 4 dreamed up by Daniele Smith, winner of the inaugural GOLF + Nicklaus Design Challenge.

Smith conceived of the hole, which he named “Coastal Creep,” as a varying test that could play anywhere from 302 to 421 yards, using four-, five- and six-shot strategies, depending on the wind and the hole location.

He fleshed out this idea in a pen-and-pencil sketch, replete with flat-bottom, flared-faced bunkers and a multi-level, punchbowl green.

True to its name, Coastal Creep, in this depiction, is set along the water, but, as Smith says, it is “a hole that could be built on just about any firm and hilly site, and therefore not restricted to a coastal oasis.”

“As Dad and I went over the finalists, we were impressed with the attention and detail of Coastal Creep,” said Jack Nicklaus II, vice chairman of the Nicklaus Companies and one of the panelists who helped select Smith’s hole from nearly 200 other entries. (Nicklaus Companies and GOLF.com are operated by the same holding company, 8AM Golf.) More than 10,000 GOLF.com readers also participated in the final vote. “We ranked our top three based on strategy, beauty, and golf sense. We also looked at quantities — size of greens, tees, fairways. In the end, our winning par 4 won on all levels.”

Adds Paul Stringer, president of Nicklaus Design: “It was clear that Daniele had a good idea of what he was doing and what he wanted. He obviously gave a lot of careful thought to strategy and playability, and he conveyed that concept very well.”

But turning a cool concept into a killer golf hole is a journey down a long, collaborative road, and at that point, the trip had only just begun. Nicklaus Design picked it up from there. Here’s how.

The character of Smith’s hole changes greatly with the wind direction and hole locations. 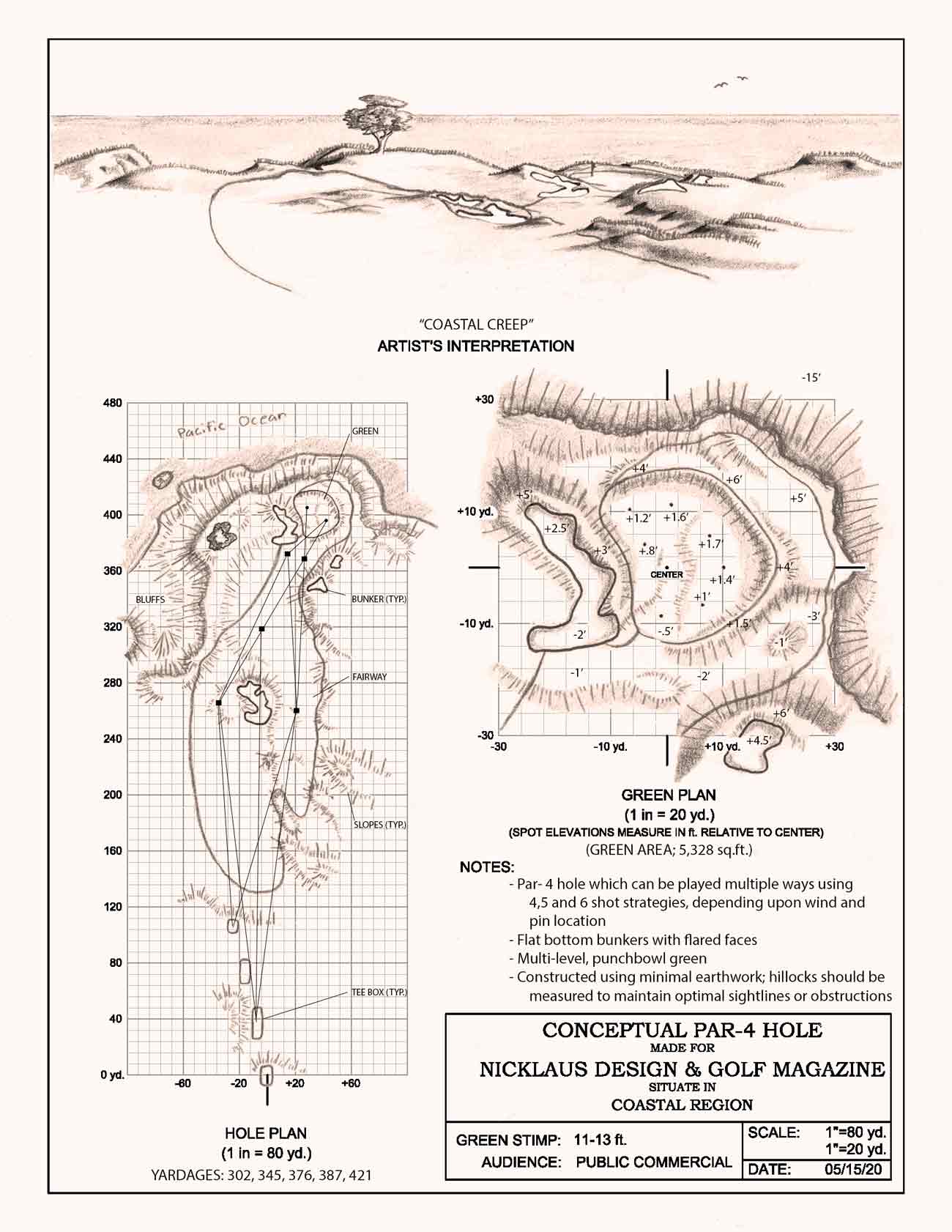 Working from Smith’s original sketch, the company’s production team created a scale-model drawing of the hole in a ratio common to the industry, with one inch equating to 100 feet.

That drawing was then sent to Nicklaus designer David Savic, who added slope and contour and produced a grassing plan, indicating such details as fairway lines, collars and hollows given over to tangled native grasses: in short, the nitty-gritty that helps determine how a hole both looks and plays.

Savic’s plans, drawn in two dimensions, were then reverted to Bobby Root, Nicklaus’s director of design production and author of a proprietary program called T2Green. With astounding speed and deceptive ease, T2Green transforms 2D drawings into 3D components of a golf hole. During the digitizing process, the software captures everything from the square footage of fairways, tees, native areas, bunkers and greens to the number of catch basins and linear feet of cart paths and drainage pipe.

“My software contains nearly every facet of golf course design, including earthwork calculations, landscape design and a complete bill of materials so we can readily assist club owners in optimizing the cost of construction,” Root said.

In course design, there’s almost no such thing as getting too specific (a 3D video of Coastal Creep is also in the works that will offer an immersive perspective worthy of a virtual reality game). Three-dimensional renderings are crucial not only for aesthetics, giving designers a clear picture of how a hole is shaping up, but also for logistics. They provide a good idea of what it’s going to take, in material and labor, to actually build the hole.

The software Nicklaus Design uses in the 3D modelling phase is a proprietary tool set developed by Full Swing Golf, a golf simulator manufacturer. “Because it is ‘simulator-ready,’” said Mike Tash, production associate for Nicklaus Design, “the virtual golf courses Nicklaus Design creates can also be played on a Full Swing simulator.” Tash said this capability will not only help Nicklaus Design clients better visualize a design or renovation, but also assist them in marketing their project to potential investors, buyers, and members.

Here’s are stills of the finished product:

And here is the 3D flyover:

As the winning entry, Coastal Creep will be used as inspiration for a hole at an upcoming Nicklaus course. Where that will be has yet to be determined. But once it is, the next phase in the hole’s evolution will begin, as designers tackle a host of questions, such as where in the routing the hole should fall. Engineers and agronomists must also weigh in on matters ranging from drainage to grass varietals.

Even after construction of the hole is underway, the fine-tuning will continue, as green shapers touch up subtle contours and designers make adjustments (is that bunker high enough? Is this fairway too pinched?) that only strike them once they’re in the field.

Stringer, the Nicklaus Design president, likens the process to a street artist working on a public mural.

“Before anything gets started, the artist is visiting the site talking to the building owner, learning about the environment where the work is going to happen,” Stringer says. “Then come all the other decisions — materials, colors, dimensions, design, the touch-up work. At the end of the day, having the ability to virtually bring the hole to life really gives our clients a clear idea of where we are going to head on our journey together.”