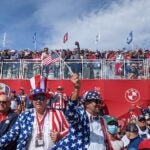 The 6th hole was showcased the Ryder Cup at its best.

HAVEN, Wis. — It’s the shortest par-4 on the grounds, but it might be the best of the lot. At least in this week’s Ryder Cup setting.

The best Ryder Cup holes are the ones that indulge the extremes. When good shots get rewarded maybe a little too much. When less-good shots turn into bad shots, and the crowd hangs on every shot throughout.

The 6th hole at Whistling Straits is a dogleg right with a mess of bunkers throughout the right side and a fairway extended up to the green flanked by trees on the far left, the hole played 358 yards in foursomes and 333 yards in fourballs.

The stiff tailwind whipping throughout turned the hole into a kind of par three-and-a-half. Not going for it wasn’t really an option in the afternoon — it was so reachable that most pros clubbed down — but the shot itself wasn’t an easy one.

DJ in the first group of the day yanked his hybrid left trying to counteract the wind and ended on a side-hill, uphill lie that the rest of us would’ve shanked without a second thought.

“Fore!” he said before hitting his shot, which he promptly pumped over the green. He hit one more chip over the green after that, and was in his pocket moments later.

The pin position was tucked in the back left, flush behind a ridge but accessible when approaching from the front, meaning there wasn’t an obviously makable putt. It also made running through the green a distinct possibility, as DJ’s opponent on the day, Bernd Wiesberger, learned.

His drive cruised a foot right of the hole, caught the downswing and ended in the rough. It was only after a deft flop to kick-in range that he won the hole, a shot so impressive it even earned applause from the partisan U.S. crowd.

Rory McIlroy was another whose almost-perfect approach perhaps deserved better.

Fifty feet long but stuck in an uninspiring lie in the patchy rough, he debated with caddie Harry Diamond for five minutes about whether to hit his shot low or high. He went high, and moments after he watched playing partner Lowry fly his ball into the pin and ricochet off the green, Rory found the fringe himself. It wouldn’t matter: Finau hit his to 15 feet, and lagged his to a foot to send the match back to all square.

The only thing whipping more than the wind was the crowd, which burst into spontaneous renditions of Gold Bless America and Proud to be an American.

In all, the 6th was played eight times on the first day, and resulted in a change in the status of the match seven of those eight times. It was, perhaps, the decisive hole of the day, and marked the turning point of Finau and English’s eventual pull-away victory over Rory and Lowry.

In navigating its various obstacles, players faced everything that the Ryder Cup is at its very best.