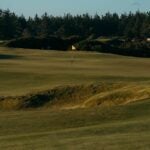 The Sheep Ranch at Bandon Dunes has only grass bunkers.

Every golf hole is designed to have challenges, places where you should and should not hit your ball. Architects use a variety of obstacles and design elements to leave you with a different test on each hole. Some of these are common like water, sand bunkers and heavy rough. But there are others ranging from the incredibly obvious to the deeply subtle. Today, we’re looking at two unique ways architects use grass as a hazard.

What you need to know about chocolate drops

Around the edges of holes, particularly in the northeast part of the U.S., you might find small mounds or little hills covered in rough or shorter grass. These mounds have been given the nickname chocolate drops like something out of Willy Wonka’s factory.

Depending on their location on the course, it might not be every round that a player deals with chocolate drops, but when placed in the right location they can add a small taste of strategy and intrigue to a course.

Before heavy machinery made it easy to pull debris off a site, rocks and other heavy materials would get piled up out of the way. Rather than removing it all, many of these piles were grassed over and — voila! — you have a series of chocolate drops. But not everyone loves a set of chocolate drops on a course. Some think they look unnatural or don’t fit the minimalist mindset of building a golf course. But when not overdone, a few chocolate drops can add some personality, even a sense of humor to a course.

But what’s the point of chocolate drops?

Chocolate drops are a great way to add strategy to a course without drastically changing playability. While hitting from behind or on the side of a mound is tough, there is no forced carry involved or sand shot that are the most difficult for high handicap players. They can be used as a fun way to punish shots hit off-line without stroke penalties or missing golf balls. Adding height or hazards like chocolate drops can also restrict views to a green from a specific side or make the angle of attack more difficult without making recovery impossible.

Chocolate drops can be found on courses old and new, like Donald Ross‘ famed Essex County Club; and Davis Love III’s recent renovation of Sea Island’s Plantation Course also has some. But the list doesn’t stop there.

What you need to know about grass bunkers

Another intriguing element found less often on golf courses is the grass bunker. While definitions of the grass bunker vary, when I say it, I mean any hollow or swale that resembles a bunker that is not filled with sand, but rather just covered in short grass or rough.

Some grass bunkers might have been designed that way from the beginning, while others may have been sand bunkers at one point that were changed. For the most part, grass bunkers are cheaper to maintain so if a sand bunker was getting very little to no action, some courses have taken out the sand and covered them with grass.

The awesome thing about grass bunkers is that they are often easier than sand bunkers for the high handicap golfer but harder than sand bunkers for the low handicapper. Bunker shots are some of the scariest on any course for the average player, but playing out of the rough is not nearly as big a deal. On the other hand, the sand shot for the scratch player is a piece of cake (or chocolate) while a shot from the rough can be more challenging or less predictable. This is an ideal way to level the playing field and keep a course interesting for every level.

The Players Club in Bristol, England, has changed some sand bunkers to grass, writing on its website that the reason was “to provide easier golf for the mid-handicapper and still retain the difficulty for the single-figure golfer.” Another fascinating course that features swales and grass bunkers is Berkhamsted Golf Club in England, which has no sand bunkers at all. The bumps and hollows around the green are plenty challenging for the good player while not as scary as a sand bunker for the rest of us.

And then there’s one of the golf world’s newest courses, The Sheep Ranch at Bandon Dunes, which also doesn’t have any sand bunkers, only grass. But that’s mainly due to the course’s cliff-like location where high winds would make sand bunkers difficult to maintain.