5 of the best courses located near stunning national parks 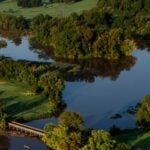 An overhead view of Langston Golf Course, one of the few courses that can claim itself as part of the national register of historic places.

The U.S. National Parks are one of our country’s great treasures. They are some of the best places to get outside, enjoy the open air and be a part of nature, if only for a few hours. We tend to say similar things about good golf courses, which raises the question, is there an overlap between those two groups? We’ve picked out five courses on (or near) the National Parks that are worth a visit — and a round.

As would be expected for a national park in our nation’s capital, Langston Golf Course in Washington is full of history. The course opened in 1939 and earned its name from John Mercer Langston — one of the first Black men elected to public office and the first dean of Howard Law School. When the course opened, it was the only track in the area open to the Black community, a vital step in the fight to desegregate golf in the area. The course is a part of Anacostia Park and is now on the National Register of Historic Places.

The 18-hole course is a par-72 filled with hilly terrain and longer par-5s. And the best part? You can play a weekend round for under $35.

The 9 holes of Wawona Golf Course at Yosemite National Park were built in 1918 by Walter Favarque within the breathtaking terrain of the Wawona Valley. Because the Wawona Valley wasn’t added to Yosemite until 1932, the golf course was grandfathered in.

The opportunity to play golf in one of the most beautiful spots in the country is hard to pass up, especially when you can play 9 holes for only $24. At an elevation of 4,000 feet, you might also hit the longest drive of your life. Playing amongst the wildlife and forest of Yosemite is a sight to behold, particularly given that the course goes to great lengths to maintain its natural beauty. The course maintains a strict no pesticides rule and only uses reclaimed greywater for the greens. Wawona Golf Course is also certified as an Audubon Cooperative Sanctuary.

Our next course brings us to the shadow of America’s most famous bridge, the Golden Gate. The Presidio is a National Park right near downtown San Francisco and the iconic bridge and bay.

The Presidio Golf Course was originally semi-private — only open to members and Army personnel — but now can be played by anyone. The course was designed by Robert Wood Johnstone, then was restyled and extended by Fowler & Simpson in 1921. It’s a treat to play with rolling terrain including large changes in elevation. The trees found on the course are majestic, playing well off the small fairways and strategically placed bunkers. There’s plenty of fun to be found in the Presidio, but the golf is certainly worth a visit; you can walk on the weekend for just $65.

Our next stop is one of the northernmost courses in the United States. While Black Diamond Golf Course isn’t technically in a National Park, it is just minutes away from the entrance to Denali National Park in the great state of Alaska.

There are a few things that make Black Diamond special, but one of the biggest is the course conditions. The course’s 9 holes are built on the Alaskan Tundra, which has no topsoil and presents a unique set of challenges for both those maintaining the course and playing on it.

Originally opened in 1995, Black Diamond is located next to a mountain lake with wildlife all around. Of course, the real pull is the extraordinary mountain scenery. But that doesn’t mean you won’t find a one-of-a-kind challenge on the course. Some of the hazards include moose-hoof prints and tundra marsh. You certainly won’t find that at Augusta. If it’s too tough to bring your clubs up to Alaska, you can play an all-inclusive round for under $100.

But perhaps coolest part of Highland Links is the lawn care study happening on the first hole. The opening hole is being treated only with natural and organic products, compared to the rest of the course.

This course is filled with majestic views and it’s fun to see if you can tell the difference between the conditioning of the first hole and the rest of the course. You can walk this course for just $65.