How I (finally) beat my dad at Saratoga National: Our favorite public course of 2021 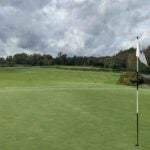 Saratoga National on a fall day.

I love my parents. I really do. They’re rock stars — nurturing, loving, emotionally wise and endlessly patient. They’ve never missed a day of duty in my whole life, despite my finest attempts to the contrary.

But, like many parents before them, my parents have a habit of pushing my buttons.

For Mom, the prodding is largely unintentional. Every time my family is together, Mom shares the natural compulsion — as both life-giver and official Colgan family documentarian — to snap photos of our engagement. It doesn’t matter when, or where, or what we’re doing. And it certainly doesn’t matter what hour of the day. As such, my mom owns a rather large repository of horrifyingly embarrassing photos of me. And much to the great delight of my friends, she has recently taken to blasting them to the world on Instagram.

For Dad, however, it’s quite the opposite. Over the years, he’s taken great delight in poking me, and nowhere does he enjoy doing so more than on the golf course. For many years, my father has tormented me during rounds. And despite my proclivity for the sport and seriousness at improving, by this fall, I’d managed to beat him a grand total of zero (0) times.

Yes, we’d had a few close calls, but through some amalgam of skill, mental endurance and good fortune, Dad had always managed to wind up on top. And, as most good dads do, he never let me forget it.

“Oh, who’s the best golfer in the family?” He’d say to no one in particular. “Well, let me check the scorecard … Oh! That’s right. Me.”

“How’d it go?” He’d tell those with the indignity of wondering if I’d finally won. “Let’s just say, the real golfer came out on top.”

And, if verbal torture wasn’t enough, in the days following a losing battle, I’d be sure to find our scorecard resting somewhere inside my room.

It was bad losing to him. Worse hearing his taunts. And nothing short of abject torture when I realized it’d be several months before I faced another chance to beat him.

One morning this past fall, my parents were back at it again. It was a Friday in early October in upstate New York, and Dad and I were up shortly before dawn. As his 57th birthday gift, I’d chased down a tee time for the two of us at Saratoga National Golf Club, just a short distance from the famed racetrack. National is about an hour’s drive from our vacation home, and so the two of us scrounged on warm clothes and headed upstairs for a quick cup of coffee before departing.

It was there, in our kitchen in the wee hours of morning, that Mom cornered me.

“Can I just get a quick photo of the two of you?” she asked.

“Can we do it later?” I replied, bleary-eyed — certain my hair was shooting in every direction but the correct one.

“Alright, let’s get it over with.”

A few seconds later, Dad and I were out the door — headed out to our dew-sweeping round on what was shaping up to be a brilliant day. It was a foggy morning, and the sun began to poke through the mist just as we stepped to the first tee.

The rules of our round were the same as always: an 18-hole singles match. Bragging rights were our only wager — no money, no side bets, no nothing. No handicaps either, despite my father’s finest protests that his son, a GOLF Magazine writer, should lay at least a few strokes.

I tried to keep the smirk off my face as I declined that last request. For one thing, Dad asked for strokes only to get under my skin — a tactic he had a rather long string of success employing. For another, how on earth could I give strokes to someone I’d never beaten?

After a hairy opening hole, the two of us found a groove on the second, a short par-4. Dad smoked a 5-iron after a thinned tee shot, placing his approach to 25 feet. I put my approach, from 85 yards out, just long of the green. Two putts (and a bladed wedge) later, he’d grabbed a one-up lead.

The sun rose with us over the first eight holes, casting a blazing array of burgundies, reds and oranges over the valley around us. It was a perfect day for golf — the kind where the outside world fades from view — and Saratoga was the perfect venue. The course is penal (perhaps too penal) but exceptionally maintained and well-situated on a gorgeous piece of property. The famed football coach Bill Parcells owns a home across the lake guarding the 15th green and is a frequent player at National. He’s even said to have a seat reserved permanently on the end of the clubhouse bar.

Dad and I whipped around the front nine, soaking in the sunlight. On the fourth hole, I struck our match back to even with a deftly maneuvered approach. Then, on No. 6, the switch flipped.

The long par-5 is, well, hellish. Players are thrice asked to navigate well-executed shots in a narrow chute, flirting with danger in every direction. The kicker comes on the approach — an often into-the-wind chip over a lake and into a deceptively narrow green.

As we both stood in the fairway after second shots, I gripped my wedge a little tighter, squinting into the still-rising sun at the green. These were the moments where I struggled most. It was time to be smart — hit the layup left and give myself two putts at par. A few seconds later, I watched as Dad drilled an iron all over the flagstick. He chuckled as he cleaned his divot. I was staring at 2-down.

But then the ball landed and disappeared. Was it in the hole? Nope. It was in the water. Two putts later, I’d taken a one-up lead.

A string of pars on holes 7-9 extended the lead to three. I was surging now, and Dad was uncharacteristically quiet. Today was the day. I was certain of it, and Dad was too.

Truthfully, I don’t remember much of the round after that front nine. I know I won eventually, closing out a victory on the 15th with a sand save. I also know that once the scores were tallied, I’d also beat Dad straight up (another first). But, like all the very best golf, my sharpest memories aren’t of well-struck shots or sunk putts.

Instead, I remember our conversation about the Giants (who, we both agree, stink), about work, and about life. I remember making a few jabs about how I’d retain the title heading into the winter. I remember sharing a hug on the 18th green. Most clearly, though, I remember a perfect day with my best friend.

Those memories are all I’ve ever have of our morning in Saratoga. I lost the scorecard on the way to the car, and didn’t think enough to grab a souvenir or memento from the pro shop.

In some ways, though, it’s better off that way. Sometimes that’s all you need — the memories … and an embarrassing Instagram photo.