Bay Area Golf: The top public courses to play in and around San Francisco 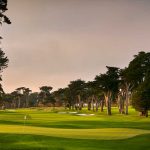 Golf fans who missed out on the West Coast major action at Pebble Beach need not fret long. Another major championship will take place in California in less than 11 months: the 2020 PGA Championship at TPC Harding Park. In the meantime, now is your chance to play that track and all the others in the Bay Area. Here’s your guide to the best public golf in and around San Fran. It all starts with Presidio.

For those staying in downtown San Fran, the Presidio is your best bet for elite public golf. Located on the north edge of the peninsula, dawn is the time to play. The course tends to host a slammed tee sheet, so getting out before the public rush is important. Also, playing early will allow you to dew-sweep while the fog lifts. It is both annoying and special to watch your ball disappear into the haze, only to find it in a greenside bunker.

After a ho-hum starting par-4, Presidio pops you with a short-but-tricky par-5 on the second hole. You drive downhill to an uphill approach where long is wrong and only the tiniest strip of turf allows you to run the ball up to the hole. Those bunkers are rugged, but in a great, tiny-slice-of-Bandon kind of way.

Not far away is Lincoln Park Golf Course, which charges a cheaper greens fee but is more rough around the edges. What it lacks in a truly testing course it makes up for in Golden Gate views.

For those making the trip before the 2020 PGA, take on Harding Park yourself. Yes, you can play in a cart, but push carts are available, and the rather flat terrain makes for a very enjoyable walk. Even on the warmest afternoons, the tall, spiraling Grand Cypress trees that line each hole serve as great natural umbrellas against the sun.

This course is not long by any means (6,800 yards from the blue tees), but for the foreseeable future it will play tighter than usual. Much tighter. The maintenance staff has already begun to narrow the fairways considerably so it can protect against the elite pros who will play it in May. At 7,251 yards for the championship tees, and without much in the form of hazards, thick juicy rough is what makes this course tricky right now.

One benefit of that course design is that you are bound to never lose a ball at Harding Park. Those tall trees are wide at their base, but spread out throughout the property, leaving all kinds of angles for scrambling approach shots.

When you reach the 14th tee, be sure to peer across Lake Merced and you’ll see the next major host in the Bay Area, Olympic Club. That’s where the PGA Championship will be played in 2028 and the Ryder Cup in 2032.

This course is intense. Commuting down from SF will take you a solid hour, the last part of which is off the main drag, on a hilly back road. On this trek, never once to you feel you’re inching toward a golf course. The desert hills rise up in front of you, and all of a sudden, there it is, right up on the edge of the Sierra Azul Preserve.

On the course as well, you feel out there. But the gigantic electricity towers that cut through the property hum along all day, reminding you of the connected real world out there.

I say intense because the wind can whip out at Cinnabar. With its thick bushy and fescue borders, a brutal wind day coupled with some tenuous ball-striking presents a perfect recipe for buying balls at the turn. As a result, it gives off a bit of an Arizona golf vibe, just without the extreme heat. This could be a welcome escape for a single round, considering Presidio and Harding Park offer a very similar look. Plus, there’s 27 holes out there, so if that career round necessitates an emergency nine, Cinnabar will be glad to have you.

This will be your most expensive Bay Area round, but it is probably worth the splurge. Pasatiempo is a slightly longer trek from downtown San Francisco, but line it up as your first or final round of the trip and you’ll find it’s just an hour’s commute to San Francisco International Airport.

Pasatiempo is located on the north side of Santa Cruz, and was designed by the great Alister MacKenzie in the lat 1920s. Despite his impressive resume of tracks (see: Augusta National, Cypress Point, Royal Melbourne) it has been stated that Pastatiempo was his favorite design.

The course has gone through many renovations, the most recent coming in the form of tee box work last fall to offer “a more natural, free flowing structure that fit the terrain of the individual hole.” With an open-air feel and plenty of cypress trees lining each hole, consider it a good combination of the three previously mentioned courses. A perfect combination? That’s up to you to figure out.  The good news is the semi-private club allows you to make tee times up to a year in advance, making your planning life much easier.