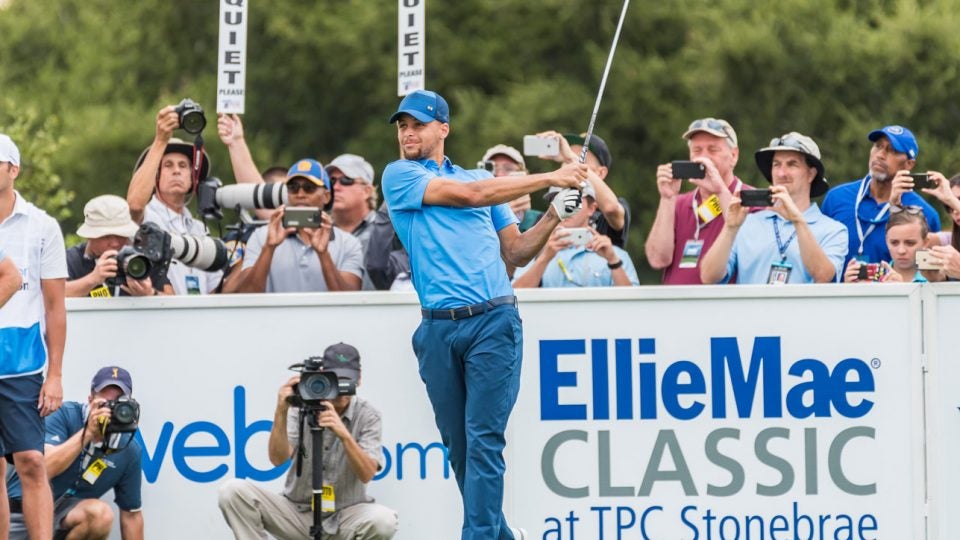 Stephen Curry tees off at the 10th hole during the first round of the Ellie Mae Classic.
Getty Images

The PGA Tour has canceled plans for an event hosted by Stephen Curry at Lake Merced Golf Club in the Bay Area, according to the San Francisco Chronicle. The Tour was reportedly expecting to officially unveil the new event in the coming weeks, as the tournament had been tentatively set for Sept. 19-22 during the fall portion of the 2019-20 season.

But talks with the potential title sponsor, Workday, unexpectedly fell through. After discussions with the finance and human resources software company broke off, the Tour said that it would not have enough time to find another event sponsor given the course changes that Lake Merced would have to undergo before the tournament.

“Due to a combination of factors, we are unable to bring a proposed event to San Francisco at this time,” the Tour told the Chronicle in a statement, citing time as the limiting factor. “While it has been reported that sponsorship was the primary factor, this is untrue. The bottom line is the short timeframe for creating an event in early fall of 2019 created the biggest obstacle. We look forward to continuing discussions with Stephen Curry, his family’s foundation and other parties with the hopes of ultimately bringing a PGA Tour event to the Bay Area.”

Title sponsorship for the Curry-held event was projected to fall between $6 million and $8 million. Tournament sponsors are often required to pay nearly twice the price for a PGA Tour event in order to cover other costs.

GOLF.com reported this past fall that the Tour originally wanted to host the event at Corica Park, which is located in Alameda on the other side of the bay from Lake Merced in Daly City. Tour officials visited the course twice this past fall, and Curry wanted to host his event at a public course in order to further introduce kids to golf. But the PGA ultimately decided against Corica Park and felt that it wasn’t ready for a Tour event.

“We are still committed to bringing an event to San Francisco,” Curry said to the San Francisco Chronicle. “It just won’t be this year.”

Members of Lake Merced approved a proposal late last year for the golf club to put more than $3.6 million into course upgrades, which was a requirement to holding the event. But the club president, Jeff Pero, informed members of the Tour’s decision to “cease further work on the tournament” in an email on Tuesday.

Pero said that the Tour and the sports agency Octagon “had been unable to finalize the necessary details … in sufficient time to hold a successful tournament this fall.” Octagon, which has Curry as a client, was set to manage and host the event.

While the event might be cancelled for 2019, the Tour could try to revive the potential tournament in two years at TPC Harding Park. As another Bay Area golf fixture, TPC Harding Park will become available after hosting the 2020 PGA Championship, when its contract with the PGA of America is up.