In what has become a billionaire’s playground, San Francisco’s munis endure 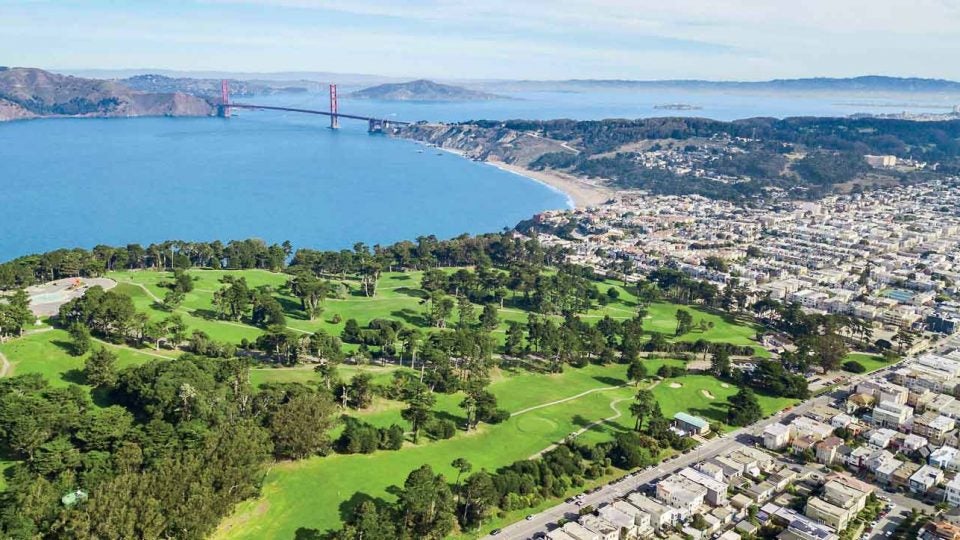 At ground level, the course may look a little rough, but to local golfers and aficionados of landmark views, Lincoln Park rocks.
Patrick Koenig

It’s a cool July morning at San Francisco’s Lincoln Park Golf Course, and I’m breezing through my round, unburdened by swing thoughts. A Mark Twain quote is what I’m dwelling on instead. Not his cheeky crack about a good walk, spoiled, or his pithy reminiscence of a chilly summer spent. The line I have in mind pertains to real estate investment.

Even if they were, I’d need to cash in the Apple stock I wish I owned to purchase any plot in San Francisco, much less the primo site where Lincoln sits today. I still remember the first time I saw it, 30 years ago, fresh out of a college, as a lost kid following his girlfriend West. She was my first love. Lincoln was a close second.

To an East Coaster like me, the course looked make-believe, a storybook layout draped over the northwest shoulder of the city, on land-meets-ocean acreage, fringed by Cypress trees that Dr. Seuss might well have sketched.

It looks the same today.

At its most magical, Lincoln casts its eye through sun-dappled coastal mists across the hilly neighborhoods you know from postcards, all the way to downtown San Francisco. Its outer edges tumble toward dramatic bluffs, which give way to close-ups of the Golden Gate. California golf provides a lot of pretty pictures. But only at Lincoln can you take your hacks with the world’s most famous bridge photobombing your backswing.

Travel
Bay Area Golf: The top public courses to play in and around San Francisco

That these zillion-dollar views are paired with raggedy conditions (clovers in the fairways; Chia Pet greens) points to another of Lincoln’s defining features: it’s a muni, one of six in San Francisco. Its $50 weekend fees ($37 for lucky locals) make it an anachronistic refuge, an affordable indulgence in a city turned exorbitant by tech fortunes, a throwback in a time of convulsive change.

You might say the same of munis in some other major cities, but nowhere else would that statement cut so deep because, in recent years, no other major city has been so radically transformed. Staggering wealth, accumulated at the speed of broadband, has sent San Francisco topsy-turvy. Entire neighborhoods have been reshaped. Real estate prices have grown surreal. One-bedroom apartments rent for an average of $3,700. Single-family homes list for a median of $1.6 million. Here’s another fun fact, drawn from a 2019 economic study: One in every 11,600 San Francisco residents is now a billionaire, the highest percentage of any city in the world. If Tony Bennett came back to fetch the heart he left here, he’d recognize the cable cars but not much else.

Except maybe the munis, which survive, underfunded, asking relatively little but offering plenty in return. No doubt they’ve given lots to golfers like Clarence Bryant, whose company I’ve got for my morning round. At 88, with a spring still in his step and a pop still in his swing, Bryant has a love affair with Lincoln that makes my ties to the course seem like a summer fling. He’s been a regular for more than 60 years, playing it with buddies on a rotating circuit of city courses. His fondness for the munis is well founded. As a black man learning the game in post–World War II San Francisco, Bryant was kept at arm’s length by the local private clubs. But the munis welcomed him, and he embraced them back.

“I don’t know what I would have done without them,” he says.

In those early years, Bryant often crossed paths with the future Masters champion George Archer, who lived across the street from Lincoln and is honored with a plaque beside the same putting green where he practiced, playing money games that have since become ingrained in local sporting lore. 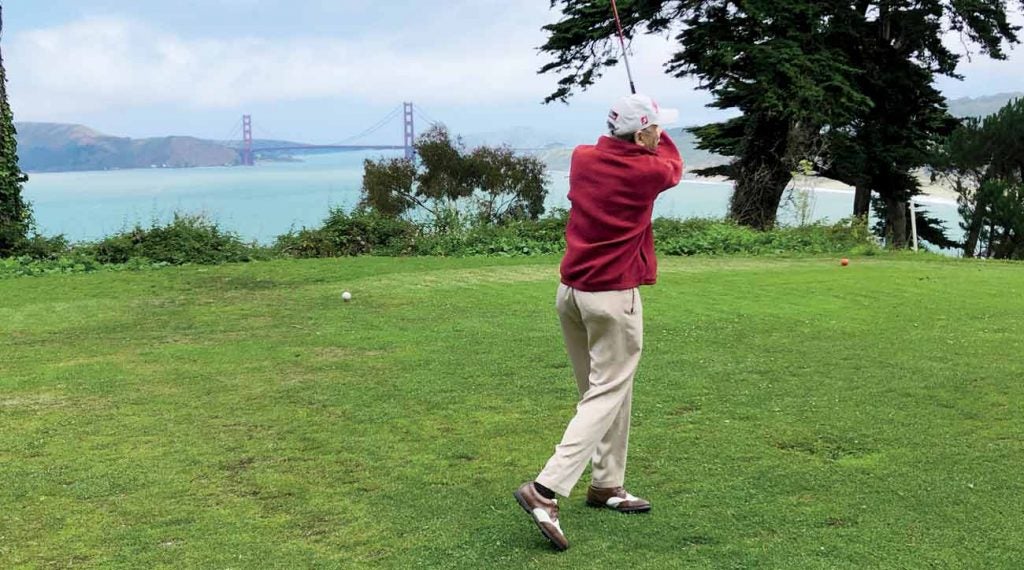 That’s another thing about San Francisco. Throughout its history, the city has lived up to many labels: boom town, Beatnik town, hippie town, tech town. Here’s another: golf town. Packed with the munis into the city’s compact seven-by-seven-mile frame are three respected private courses, the Olympic Club, Lake Merced and San Francisco Golf Club, as well as the Presidio, once strictly military, now high-end daily fee. Then there’s the list of players. Not just Archer but Bob Rosburg, Johnny Miller and Ken Venturi. All major champions. All born here and raised on the munis. Tony Lema lived just east in Oakland, but he crossed the bay to test himself again the competition. Harvey Ward, the amateur great, hailed from North Carolina but made San Francisco his adoptive home.

Ward’s pal, Venturi, was a blue-collar kid whose parents ran the pro shop at Harding Park, a city-owned course that’s long been the least muni-like of the local munis. Grand and tree-lined, Harding was a Tour stop throughout the 1960s before suffering decades of neglect, only to bounce back by way of a 2003 renovation that restored it as a big-time tournament stage, now operated by the Tour as a TPC, or Tournament Players Club. The course hosted the Presidents Cup in 2009 and will do the same for the PGA Championship next year.

Popular as it was in most discerning golf circles, Harding’s overhaul (which included a renovation of the facility’s sibling nine-hole layout, the Fleming Course) was still a polarizing project. It was paid for with a $16 million bond, and not everyone was thrilled with the public outlay, or the resulting bump in greens fees. Never mind that even now, city residents pay a relatively paltry $75 on weekends (it’s $188 if you’re from out of town). Local politicians heard the grumbling, and in the wake of Harding’s redo, they went back to treating golf as the political hot potato it has always been. These may be flush times, but the city’s courses aren’t exactly flooded by wellsprings of support. 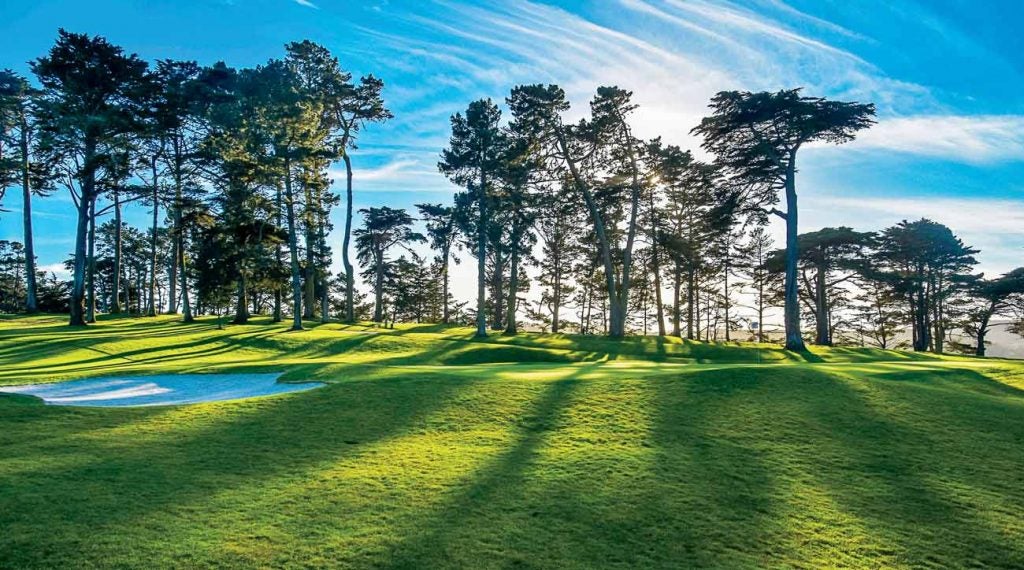 If Harding Park appears to be a cut above the city’s other munis, it is. It’ll host the ’20 PGA Championship.
Patrick Koenig

And yet they soldier on, some in a kind of suspended animation. Take Gleneagles, a nine-hole layout tucked into the folds of South San Francisco that has teetered for years between life and death. In this city, if you’re trying to establish your muni street cred, this is the course you should name-drop first. Designed by Jack Fleming, a looming figure in San Francisco golf (his local credits include not just both Harding courses but also the Golden Gate Park Golf Course, a sneaky-great par-3 track in the sprawling park of the same name), Gleneagles has a scruffy bearing that belies its bloodlines. It opened in 1962, and wasted little time making its reputation as a place for serious sticks and sharks. Big-money games were legion, which was part of the attraction for Lee Trevino, who looped Gleneagles in his prime and lost the battle with it. As the San Francisco Chronicle later reported. “[Trevino] fired a 71, and then, after he got to know the course a little, he fired a 73.”

Gleneagles’ quirks sure can confound you, with tilted fairways set into the hillsides and befuddling winds whipping off the bay. But the difficulties of playing the course pale before the challenges of running it. Pick your favorite poison. Budget-cuts, droughts, soaring water bills. In recent decades, Gleneagles has endured them all.

“This is really the story of a course that would not die,” Tom Hsieh says. “So many forces have conspired to kill us, it’s amazing that we’re still around.”

It’s a Tuesday morning, and Hsieh, a fiftysomething San Francisco native who leases Gleneagles from the city, is standing by the clubhouse, a low-slung building with a time-capsule bar that was patterned on a Scottish pub. Inside, two off-duty firemen are downing whiskey. On the first tee, a fivesome of seniors, all cargo pants and denim, is setting off on their regular skins game. Otherwise, there’s not a whole lot doing. 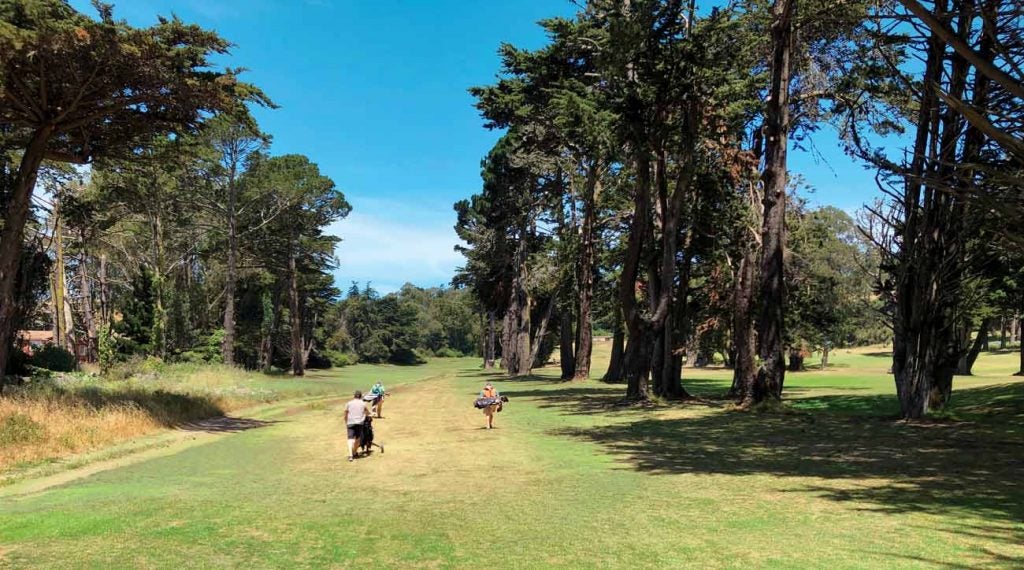 From our elevated vantage, several fairways are in view, yellowed from the heat. But the greens are green. A few years back, Hsieh bootstrapped a renovation of them with pro-bono help from the superintendent of the California Golf Club, a prestigious, nearby private course. The upgrade gave Gleneagles a much-need boost. Hsieh has taken other creative measures, including the addition of Frisbee golf. But creative measures only go so far when maintenance costs keep rising and the city has him locked in on the $20 greens fees he can charge.

“You give me the money to do this right and I’ll give you an absolutely world-class course,” Hsieh says. Long pause. “But I’m not holding my breath.”

So it goes for munis. Existential crises are a way of life. Sharp Park only recently escaped one, despite a pedigree that you’d think might protect it from such threats. Owned by the city of San Francisco but located just south of the city limits, in the surf town of Pacifica, Sharp is a rarity of rarities: a seaside, Alister Mackenzie course, open to the public at a modest price. None of which prevented an environmental group from suing to have the course shut down. The fight dragged on for years before resolving in favor of the golfers. A push is underway now to rustle up the financing for long-deferred course improvements, but bureaucracies aren’t easy. Many say that it will happen; no one knows just when.

Clarence Bryant will be happy if it does. Then again, Clarence Bryant is pleased with golf in almost any shape it takes. At the moment, he’s at Lincoln, moving up the seventh fairway, toward a high point of the course with commanding vistas that take in the downtown skyline. Time was when the TransAmerica Pyramid was the tallest building, a noted landmark, as much an emblem of the city as Alcatraz. But last year it was dwarfed by another structure, the Salesforce Tower, a gleaming edifice of glass and steel that looks to some like a giant cigar but is seen by others as an obscene gesture: the architectural equivalent of the superrich flipping everyone the bird.

Bryant has no beef with the building. “Cities change,” he says. “That’s just what they do.”

Meantime, he has the munis, and he might as well enjoy them. They’re not making them anymore.