What are the best match-play holes for the Ryder Cup at Whistling Straits? 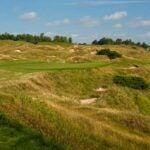 A look at the green of the par-3 12th at Whistling Straits.

PGA of America via Getty Images

This week’s Ryder Cup takes us to Whistling Straits, a Pete Dye design in Sheboygan, Wis. How representative is the course of Dye’s overall portfolio? In what ways does it fit the style he’s known for? In what ways, if any, is it an outlier?

Jeff Lewis (joined panel in 2001; has played 97 of current Top 100): Whistling Straits is very representative of the Dye style. Dye took us out of the dark age in architecture mostly because he was inspired by the classic links courses of Great Britain and Ireland. What was always interesting about Dye, though, was that despite that inspiration, which is probably more visually clear here than anywhere, most of the time it was more of an implied connection than an explicit one. Long story short, this course looks like a links but plays like a parkland course as far as the turf conditions and approaches to greens. With the number of “manufactured” links that have joined the ranks since this course was built that are successful at replicating links strategy and conditions, the Straits course has lost a lot of its luster for me.

Michael Pelliccione (joined panel in 2020; has played 65 of the World Top 100): I’ve got Whistling Straits just behind Kiawah, Harbour Town and TPC Sawgrass on my list of favorite Dye designs. The original property was rather flat, so Dye had to use truck loads of sand and soil to make the course what it is today. Some may say the appearance at Whistling Straits seems fabricated and unnatural versus the other courses in his portfolio. As Lewis says, Dye had one goal and that was to create championship-style golf that closely resembles what you’d find on the coast of Ireland. On the flip side, Whistling Straits shares traits with many of Dye’s courses. Like most, the Straits is extremely difficult from tee to green. There are more than 1,000 bunkers on the property, and while some are purely aesthetic (they’re not really in play), they present a sizable challenge for most of us. Dye was known to play mind games with the golfers, and perhaps the most difficult part of Whistling Straits is the approaches into the greens. Green angles running in the opposite direction of the fairways make it hard to feel comfortable on any one shot. On top of that, the winds off Lake Michigan can change directions on a moment’s notice.

Adam Messix (joined panel in 2015; has played 100 of the World Top 100): Pete Dye preferred to call himself a “builder” of golf courses rather than a “designer” or “architect,” and it shows at Whistling Straits because the entire course was created from scratch. His courses tend to follow a pattern: a reasonably gentle opener and the classic gettable par-5, dangerous par-3 and killer par-4 finish. Whistling Straits is not a typical Dye in terms of looks as there’s more sand and less water, but you see the high mounds that are characteristic of his work. Bunkers here are more plentiful than the usual Dye course but they are in all shapes and sizes as you would typically see. The one less talked about attribute of Dye courses is how he tends to have his fairways slightly offset to the line of play off the tee, making drives subtly more demanding. The setting that Dye created is unique. If you want to see a course closer to the typical Dye look, drive down the road and catch the two outstanding courses at Blackwolf Run.

What are one or two of the best holes at Whistling Straits, particularly as it pertains to match play? Any that you’re especially keen to watch this week?

Lewis: The short par-3 12th and the short par-5 16th. Most matches don’t reach 18. Dye is so good at designing scary par-3s that are not necessarily wildly long (cue the tape of Sawgrass 17). The 12th here is an oddly shaped green that is really a few greens kind of strung together, each of them pretty small. You are going to have to execute here, no doubt about it. The 16th comes at such a pivotal time in most matches and is within the capacity of every player in the field to reach it after a reasonable drive. Great fun.

Pelliccione: The opening tee shot will be extremely critical for the Europeans. How will they handle the noise and pressure of 40,000-plus fans screaming down their necks? As for the Americans, will they live up to the expectations as the favorites or will our hearts be torn out again? There really is no better scene in golf than the opening tee shot of a Ryder Cup. Looking down the list, the next hole that stands out and could be a deciding factor in a match is the par-4 15th. Measuring a whopping 518 yards, this hole requires raw power off the tee, which gives the Americans a huge advantage. Expect captain Steve Stricker to split up his bombers to exploit the Europeans weakness.

Messix: I agree with Jeff on the 12th hole. Given the size and shape of the green along with the huge teeing ground, the hole can be quite difficult or a total pushover. Even though it may not see many matches, the finisher is a terrific hole and exceptionally difficult. It is quite possible we could see the finisher won with a score higher than par in a foursomes match.

Is there any particular style of play that Whistling Straits favors? Or, to put it another way, do you think the design lends an advantage to one team over the other?

Lewis: When the PGA was played at Kiawah, another course inspired by links that doesn’t play like one, much was made of the length of the course and how that favored bombers. What’s interesting in the historical data around Dye’s courses in tournament play is that they do seem to allow all styles of players to succeed. In the 2010 PGA at the Straits, looking at the top finishers, Zach Johnson/Rory McIlroy, Steve Elkington/Dustin Johnson and Matt Kuchar/Jason Day are all pairs that finished in the top 10 with identical scores who represent the opposite ends of the spectrum in terms of length and style of play. In 2015, we had top finishing pairs of Lahiri/Koepka, Kuchar/DJ and Streb/Finau. Architecturally, a course is better if it does not dictate a manner of play and clearly this one does not.

Pelliccione: On paper the Americans are the clear favorites, with eight of the top 10 players in the world. But this is the Ryder Cup and everything is thrown out the window. The Europeans flat out OWN the Ryder Club, having won nine of the last 12. Stricker will tweak the course so it’s set up to favor the Americans. Expect some of the fairways to be wider and greens speeds turned up, both of which don’t sit well for Europeans who prefer tighter fairways and slower greens. The Europeans used that exact recipe at the 2018 Ryder Cup at Le Golf National and destroyed the Americans. It pains me to write this but until the Americans can learn to play as a team and develop the chemistry like their fellow competitors, I have to give the edge to Europe.

Messix: There is plenty of width at Whistling Straits and my bet is that it will not play crazy fast, so it should favor the bombers. However, you tend to see an eclectic group of winners on Pete Dye courses, but the one common trait on all of them is that the leaders drive the ball well that week. The Ryder Cup is a different animal with the matches once again boiling down to which team is making putts, particularly at clutch moments.