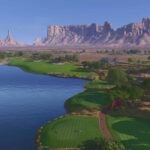 The plan mimicked that of many other Nicklaus Design signature courses.

Have the man himself visit the site. Check out the property. Meet the locals. Get a better sense for the kind of course he wants to design.

But this time was different. The pandemic kept him from making the trip.

No matter. Jack Nicklaus scoured photos, topography maps and design plans and worked with members of his team who had been on the site to formulate a strategy.

As a result, Nicklaus Design, an affiliate of GOLF.com’s parent company, 8AM Golf, is well on its way toward building a championship course about 30 minutes from Riyadh, Saudi Arabia. Construction is slated to begin this spring with the opening likely to be near the end of 2022. It will be the first Jack Nicklaus Signature Design in the Middle East to involve Nicklaus himself.

The golf course, Qiddiya, will be an integral part of Golf Saudi’s goal of elevating the game in the Kingdom, where there are just 5,000 golfers. Golf Saudi is aiming to more than double the number of public-access courses in the country — there are five today — by 2030.

Bringing golf to a place where it hasn’t been part of the culture is not new for the Nicklaus Design team.

“This is, literally, what was done in Dubai 20 years ago,” said Dirk Bouts, a senior designer for Nicklaus Design. “You’re kind of doing it all over again.”

The goal is to design a course that can host prestigious events — the European Tour’s Saudi International would appear to be the most obvious candidate — while also catering to players who might be new to the game. The design, which will sit about 2,000 feet above sea level, will have wide fairways and no rough.

“Jack definitely wants to make sure it’s enjoyable,” Bouts said. “Surely the local people playing it will not be that familiar with the game yet, so you want to make sure they have a great time.”

As is the case with any new project, there will be hurdles to overcome. Weather is near the top of that list. The summers in Saudi Arabia are long and hot and there is little rainfall.

“Maintaining the turf and having the right amount of water there will certainly present a challenge,” said Paul Stringer, president of Nicklaus Design. “They’re up to that challenge.”

Nicklaus Design will put in a couple of lakes, mainly for irrigation storage. “The site doesn’t have a lot of vegetation,” Stringer said, “so like a lot of desert golf courses, it will have to be created.”

Stringer, who has lived in Scottsdale and Tucson, sees similarities between the Arizona desert courses and the Tuwaiq mountain range which will surround Qiddiya.

“It reminds me a little bit of Pinnacle Peek in north Scottsdale in terms of the formation,” he said.

One main attraction will be the three holes that will sit on a small escarpment on the southern edge of the site with “tremendous views of the valley down below,” Stringer said.

Beyond golf, the development will also include amusements parks, a safari park, a high-end resort hotel and spa and a residential community.

Qiddiya’s origin story began two years ago when Nicklaus met with His Excellency Yassir bin Othman Al-Rumayyan, the chairman of Golf Saudi and the Saudi Golf Federation. Golf Saudi was seeking a design firm to build a new private golf club in the Kingdom.

At the end of 2019, Nicklaus Design was awarded the project. The team will also create a nine-hole par-3 course and a large practice facility. Sean Quinn, another senior designer working on the project, said the team plans to have fun with the par-3, including a “St. Andrews 17th green with a wall behind it.”

The notion of growing the game in a country where golf is just catching on was appealing to Nicklaus Design.

“That’s what makes it exciting for Jack and all of us,” Stringer said. “Jack loves creating golf in new cultures and new environments that haven’t had golf.”

Once it’s deemed safe to travel, Nicklaus will pay a visit to the Kingdom, where he will put his official stamp of approval on the design.