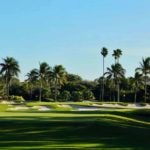 There’s been much talk of late about Seminole Golf Club, with pundits waxing on about its history, Ben Hogan, and all the heavy-hitters who have haunted the club’s hallowed grounds.

We understand the gushing, and we’re not here to throw shade on what does sound like a darned cool place.

But with Seminole set for a televised star turn during this Sunday’s high-wattage charitable skins game, we’d like to pull the veil back on another South Florida club that many of us have us have never seen and likely never will — a club that stakes its own claim to fame.

Drive 40 minutes south from Seminole on I-95 and you enter the orbit of Pine Tree Golf Club, home to a 1961 Dick Wilson design that has long been a darling of golf architecture buffs. Though it can’t top Seminole in prestige, or outrank it on Top 100 lists, there is one category in which Pine Tree blows Seminole away, as it does every other golf club we can think of.

Over the course of Pine Tree’s history, its members have won more major golf championships than the members of any other golf club. Their collective total is 50.

By our count, no contender comes close.

Before we dive into the details, we should clarify our terms.

For the purposes of this record, we are including winners of both men’s and women’s majors. But we are not including clubs that grant honorary memberships to winners of majors staged on their own courses. So, Augusta National, for instance, is not in the running.

We’re talking about full-fledged, dues-paying members: golf luminaries who wanted in and were willing to plunk down their own dough to join.

In Pine Tree’s case, the names of those members, with their major championship tallies, goes like this:

A casual reader of that roster might get hung up by the first name on it: Sam Snead, owing in large part to Snead’s reputation as a man whose wallet was a musty, cobwebbed object that rarely opened to the light of day.

Are we really to believe that Snead shelled out?

It’s true. He was tight.

It’s also true that in 1965, when Snead asked to become a Pine Tree member, he figured he’d be granted the same honorary status that he enjoyed at many other clubs.

Sorry, he was told. At Pine Tree he would have to pay like everyone else.

And so he did.

The club has correspondence from Snead to prove it, along with a check for his membership dues.

Snead was fond of Pine Tree for a lot of reasons. He liked playing cards in the clubhouse. He liked kibitzing with the membership, though kibitzing is not a word Snead would have used. He liked the money game. And, above all, he liked the course, a stout challenge with testy, pushed-up greens set at compelling angles on what was otherwise flat terrain.

Pine Tree is what golfers like to call a “player’s course,” a well-worn term that is no less meaningful for being overused: its membership is stacked with single-digits, young and old, male and female. As one Pine Tree member told GOLF.com, a team composed of Pine Tree’s top women players would likely dust an all-star men’s squad from almost any other club, on any course, from any tees.

Among those female members is Karrie Webb, who won seven majors.

Another of those members was the late, great Louise Suggs, whose 11 biggies included four wins in the Titleholders Championship, an event that was not a major in its day but which was later designated as such.

Yes, in our record keeping, we’re counting those.

Is there any other club that rivals Pine Tree’s major count?

As records go, it’s hard to verify but also difficult to dispute.

In our search for a club that might top Pine Tree, GOLF.com asked scores of golf history buffs and members of prestigious private clubs around the world.

None could come up with another winning answer.

Pine Valley? Please. Arnold Palmer was a member, and Gary Player belongs. So, too, do Darren Clarke, Nick Price and Ben Crenshaw. But the roster of major winners grows pretty thin from there.

In Florida, where Tiger Woods, Jack Nicklaus and Annika Sorenstam all reside (that’s 43 majors, if you’re keeping score at home) some obvious contenders captured out attention.

Isleworth. McArthur. The Medalist. The designers of those clubs (Palmer, Nick Price and Greg Norman, respectively) account for 12 majors, and the memberships include a constellation of Tour stars. But rare is a Tour pro who pays full freight, and, besides, none of the above clubs sniffs a collective 50 majors titles anyway. The closest we could find to Pine Tree’s tally came from the Bear’s Club, whose reported membership claims 32 majors. Credit Nicklaus with 18 of those, while Shane Lowery, Justin Thomas, Louis Oosthuizen, Dustin Johnson, Keegan Bradley and Charl Schwartzel contribute one a piece. Rory McIlroy and Ernie Els also belong, and with them we can add another eight.

Not bad at all, but still a long way to go.

The traditionalist might ask: What about the amateur championships (the men’s and women’s U.S. Amateur and British Amateur) that used to qualify as majors but no longer do? Did you count those?

No, we didn’t. But even if we had, no dues-paying total would have surpassed 50.

Not that we can think of, anyway.

We offer all of this as cocktail party conversation, or fodder for a question on trivia night. And we’d be more than happy to be corrected, so please advise us if we need setting straight.

In the meantime, enjoy the competition at Seminole this weekend. The coverage starts at 2 p.m. ET on Sunday. There’s something else you should know, though. The Tuesday afternoon skins game at Pine Tree is serious business, too. You’ll just never see it on TV.

Why the U.S. Army used to test heavy artillery at this week's PGA Tour venue