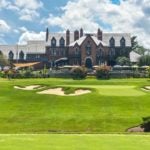 The 1952 PGA Championship was held at Big Spring Country Club in Louisville, Ky.

The Masters — same damn course every year. The U.S. Open — venues within a corporate-card Uber ride of a coastal metropolis or a newbie in Nowheresville that will soon slide back into irrelevance. The Open Championship — hard, brown, windy, Royal Whatchamacallit. Can’t tell one from the next.

Hyperbole? Maybe. But when it comes to cool, quirky, forgotten, doomed, hidden-gem host sites, the PGA Championship wins 9 and 8. (Remember, the PGA was match play from its 1916 debut until 1957.) Though the PGA, which kicks off Thursday at TPC Harding Park in San Francisco, has gone a bit “trad” recently, with U.S. Open stalwarts like Bethpage and Baltusrol crashing the rave, its history is rich with intriguing sites, like this year’s venue.

Did you know, for example, that Harding Park used to be a hardscrabble muni where Ken Venturi’s parents ran the pro shop? It’s true. Or that half of the band Jefferson Airplane used to caddie there? That’s actually false. Here’s a test of your PGA host course knowledge — challenging but fun, like a major host should be.

1. Which NYC-area course hosted the first PGA Championship, in 1916?

Answer: C. Siwanoy’s head pro, Tom Kerrigan, who eventually held the post for 50 years, was a mover and shaker in the newly founded PGA and its inaugural championship, which featured a field of 32, winnowed down by qualifying rounds around the country. Winged Foot GC opened in 1921 and later hosted the 1997 PGA famously won under a rainbow by Davis Love III. Westchester CC, longtime host of the PGA Tour’s Westchester Classic, wasn’t built until 1922. Quaker Ridge’s golf course debuted in 1918; it has never held a professional major but has welcomed the Walker Cup and the Curtis Cup, and is widely considered one of New York’s finest tests.

2. Which course within 50 miles of Manhattan has not hosted a PGA Championship?

A. Inwood CC
B. Pomonok CC
C. Engineers CC
D. Pelham CC
E. They all have

3. True or false: Flossmoor CC, site of the 1920 PGA Championship, was founded by a group of dentists.

Answer: False. The club, founded in 1899, is in the town of Flossmoor, Ill., a site chosen for its accessibility to the then-burgeoning Illinois Central Railroad line. Flossmoor is also justly proud of winning GOLF’s “Renovation of the Year” in 2009.

Answer: C. At its peak, Salisbury CC had five 18s on its property in East Meadow, Long Island, including the Devereux Emmet–designed course where Walter Hagen triumphed in 1926. Today, that course is Eisenhower Park’s Red Course. Nassau County took over the property during the Great Depression, when the club’s owners couldn’t pay their taxes. Eisenhower now has two layouts besides the Red: the White and the Blue, naturally.

5. What was Pinehurst No. 2’s first major championship?

Answer: The 1936 PGA Championship. Payne Stewart’s immortal putt to win the 1999 U.S. Open over Phil Mickelson? It came six decades after No. 2’s first major, won by Hall of Fame member Denny Shute, the first of his back-to-back PGA titles.

Answer: Blue Mound Golf & CC in Wauwatosa, Wis., host of the 1933 PGA Championship, which was captured by Gene Sarazen for his third and final PGA win. “The hardest task an architect faces isn’t to build a ‘championship course’ but rather a course that members will enjoy on a frequent basis,” says Morrissett. “In the case of Blue Mound, Seth Raynor did both. The flatter perimeter holes sparkle thanks to greens like the Double Plateau 2nd followed by the Biarritz — if there has ever been a better architect on flat ground, I haven’t seen him. The land movement ramps up starting at the downhill Short 7th, followed by a stunning uphill par-4, capped off by a massive Punchbowl green. It’s one of the Midwest’s best holes.”

7. Match the PGA host and its hometown:

Answer: A-2; B-1; C-4; D-3. Manito witnessed one of the PGA’s greatest upsets, with Bob Hamilton, in 1944, nipping Byron Nelson 1 up for his only major triumph. Nelson bounced back the next year with a victory at Moraine over Sam Byrd. (Coincidentally, Nelson’s other PGA title came over another Sam — Snead, a sweet 1-up triumph at Hershey CC’s West Course.) The underappreciated Keller hosted the 1932 and 1954 PGA as well as the PGA Tour’s St. Paul Open from 1930 to ’68 and the LPGA’s Patty Berg Classic during the 1970s; it’s owned by Ramsey County and was designed by one of its civil engineers. (Now that’s good government.) Pomonok witnessed another Nelson finals defeat, this time at the hands of Henry “Don’t Call Me Captain” Picard, held during the 1939 New York World’s Fair, about two miles away. Just imagine the traffic.

8. Of the four courses in the question above, which no longer exists?

Answer: D. Head to the Pomonok section of Queens where once stood a Devereux Emmet design, host of the 1930 PGA and the 1932 U.S. Open, and today you’ll find the Electchester co-op housing development, some public housing and an offshoot of Parsons Boulevard. The club disbanded and sold its land in 1949. Another PGA host site a few miles away, Fresh Meadow CC, site of the 1930 championship won by Tommy Armour, half-escaped a similar fate: It sold in 1946 and moved five miles away to Lake Success, where the club lives on today.

9. Pittsburgh Field Club, host of the 1937 PGA, built which of the following on its course the next year?

A. An elevator
B. A mausoleum
C. A blacksmith’s shed
D. A polo field

Answer: A. Though B might have made sense, too. PFC’s original closing hole was a dead-uphill par-4 — literally, in some cases. Stories of players suffering fatal heart attacks while climbing to the top of “Pike’s Peak” — some apocryphal, some not — were sufficient that in 1938 the club built an elevator that takes golfers up 70 feet in 39 seconds, while converting the 18th to a less death-defying par-3.

10. Which club hosted the PGA first?

Answer: A. In 1963, won by Jack Nicklaus, his first of five PGA victories; followed by B, in 1981 and again in 2001. C was the longtime host of the Heisman Trophy ceremony, and D is a high-end chain, like TPCs.

11. Where did Jack Nicklaus not win a PGA Championship?

Answer: D. That’s right, Jack didn’t win on the course he grew up on in Ohio. In fairness, Scioto hosted only the 1950 PGA, when Jack was just 10 years old and attended as a fan, leaving the door open for Chandler Harper’s lone major title.

Answer: Cedar Crest CC in Dallas, Texas. In the semifinals of the 1927 PGA Championship, the first contested in the South, the always hatless Walter Hagen was struggling with the sun in his eyes on his approach to the 13th hole. A 15-year-old boy offered Hagen his ball cap to hit the shot. Hagen accepted, knocked his approach on (even though the cap fell off mid-swing) and won the hole. The boy: None other than Byron Nelson. But we digress. The City of Dallas Parks Department bought the formerly private club in 1946, and in 2004 D.A. Weibring oversaw the renovation of Tillinghast’s design.

Answer: B. The other choices are highly regarded courses in Wales, while Llanerch CC in Havertown, Pa., host of the first stroke-play PGA Championship, in 1958, was named for the Welsh word meaning “open space.” Its colorful early history included creating one of the world’s longest holes, a 655-yard par-5, when it expanded from nine to 18 holes in 1903, and its head pro for almost three years in the early-to-mid 1930s was Denny Shute (him again), who went on to win a British Open on top of his two PGA victories.

15. Which of the following clubs has not hosted a PGA Championship?

Answer: Trick question — they all have. If you’ve heard of each one, you’re a better man than me. Sure, John Daly’s iconic upset at Crooked Stick in 1991 is indelible (though the Pete Dye–designed course hasn’t seen a major since). BSCC? It’s in Louisville, Ky., and Jim Turnesa, one of seven golfing Turnesa brothers, won his family’s only major title at the 1952 PGA there. Lee Trevino nipped Jack Nicklaus by a stroke at the 1974 PGA at Tanglewood Park, a public facility in North Carolina whose Championship Course was designed by Robert Trent Jones Sr. and renovated in 2018 by Robert Trent Jones II. Miami Valley? Not in Florida but rather Dayton, Ohio, and site of the final match-play PGA, in 1952, won by — who else? — Lionel Hebert. Plum Hollow, PGA host in 1947, built by Brits H.S. Colt and C.H. Alison, saw the championship captured for the first time by an Australian, Jim Ferrier.

16. Which soon-to-be-finished course will host the 2027 PGA Championship?

Answer: C. PGA Frisco, in Frisco, Texas, the new headquarters of the PGA of America, will have two courses, each set to open in 2022. Gil Hanse’s East Course will host the 2027 and 2034 PGAs, plus Champions Tour and LPGA majors, while the friendlier West Course will be a Beau Welling design. There is only the classic Donald Ross layout at suburban Philly’s Aronimink, site of Gary Player’s PGA Championship win in 1962 — he triumphed again in ’72 and finished T2 in ’82 — as well as the upcoming 2026 PGA. TPC at Oak Barrel Winery is purely fictional, at least as of this writing. The Players Club was a 1998 film written, directed by and starring Ice Cube with a 31 percent rating on Rotten Tomatoes.