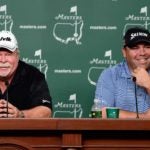 Craig and Kevin Stadler at the 2014 Masters.

Few people can ever claim to have made history at Augusta National. The Masters’ host is in the first paragraph of golf’s story in North America, from the bygone era through to the present day. Those who make history at Augusta, no matter how small, add themselves to that rich tapestry. For most, it’s a lifelong goal (though few ever achieve it). So when PGA Tour pro Kevin Stadler was presented with an opportunity to make history at Augusta, it seemed to the outside world like a slam dunk.

In his 12th season on Tour, Stadler finally broke through professionally by winning the 2014 Phoenix Open, his first-ever at the pro level. With the win, Kevin, whose father Craig won the 1982 Masters, earned his first invitation to Augusta. With his father’s lifetime invitation to the event, Kevin and Craig were gifted with the opportunity to make Masters history as the first-ever father-son tandem to play in the event.

The only problem, as Kevin explained to hosts Colt Knost and Drew Stoltz in this week’s episode of GOLF’s Subpar, is that the younger Stadler didn’t want the attention that was sure to accompany playing with dad at the event.

“It’s not my nature to go hunt down cameras and kind of make a spectacle out of things,” Stadler said. “I felt like that’s what they were trying to do to both of us there.”

Because of the elder Stadler’s playing career, Kevin spent his childhood at Augusta, attending the Masters every year.

“I guess as I get older and probably in the future I’ll look back and it was a pretty cool deal, but at the time I didn’t think it was a big deal,” he said. “My dad’s played Augusta since I was born. To me, it’s second nature to be there with my dad. To me, it was really cool that I actually got to play there this time.”

As Kevin saw it, his relationship with Augusta was what made the experience so rewarding, not because of the history he and his father were about to make.

“I didn’t think that it was warranted,” he said. “I was just there to play a tournament and my dad was also playing a tournament. It was really cool that he was there, but once competition was there, it was all about competition.”

For Kevin, family would naturally take an important role in the week, but only until the competition began.

“We played the practice rounds together, par-3 together. All that,” he said. “Having barbecues, hanging out at the houses all week. (Craig) was like 60, 61 then, so he wasn’t very competitive. I didn’t really want to play with him to be perfectly honest with you. I wanted to play with more competitive guys.”

As luck would have it, Kevin got his wish — Augusta elected to separate the two Stadlers.

“I was very excited that they did not pair us together, that was kind of the rumbling all along that they were going to,” Stadler says. “I was playing really well then and I didn’t really want to be a sideshow.”

Now, a half-decade later, Kevin says he’s grateful he had the opportunity to make history. But even more so, he’s proud of his performance (which culminated in a T8 finish) rose above the noise.

“Looking back now and probably 20 years from now, it would’ve been incredible to say I got to play with my dad in the Masters,” he said. “But when it was going on, I didn’t want to be a sideshow.”

Watch the rest of Stadler’s Subpar interview, including his crazy memory of battling Shinnecock Hills at the 2004 U.S. Open, in the video below.