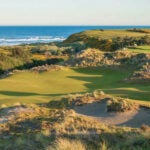 A view of the 13-hole par-3 course, Bandon Preserve, at Bandon Dunes.

Earlier this year, I had the opportunity to ride around with Andy Staples as he finished his short course “The Staple,” at PGA National Resort in Palm Beach Gardens, Fla. I wrote about Staples’ new vision here, but afterward, my wheels started turning. What makes a great short course? How does an architect approach building one compared to a par-72 course? The questions kept coming, so I reached out to more experts.

Bobby Weed told me about his experience building the Orchard Course at The Olde Farm Golf Club, and Brian Curley told me about building several short courses in China at the Mission Hills Resort. Here’s what I learned, which I decided made up four basic par-3 principles.

Routing is a completely different challenge for a short course than it is for a full-sized course. Short courses are usually built in an already limited area — often after the main course has been built — which can make creativity more difficult. Rather than a simple down-and-back formation, Staples opted for a figure eight at The Staple, meaning there is a middle spot with a crossing. It’s a smart way to make the experience more enjoyable, and it has nothing to do with hole design.

“I’m hoping that becomes kind of the Pinecone,” said Staples, referring to the stationary food-and-drink cart at The Cradle at Pinehurst. “The social convergence of everybody.”

Most short courses were created to maximize the fun factor and encourage socialization, so well-connected holes are crucial.

“I think it’s all the more important to have good green-to-tee connections,” Curley said, “because it’s really strange when par-3 courses become detached.”

A much higher percentage of golfers can walk short courses, so making that experience as pleasant as possible has added importance. It might seem easy to have good green-to-tee connections in a smaller place, but architects still have to place them far enough away to keep golfers safe.

How it all comes together can change a lot from one architect to the next. Staples told me, “The new movement, everyone gets into their excavators and chops things up and chunks it up and that has to be done in the field. But if you’re not in tune with that, you’re going to have really crummy, crappy golf. And I think just because I’m not on a piece of equipment, I can still get a lot of that.”

Designing and building golf courses is like anything else – there are several ways to do it and do it well. Staples said he tries to get about 80 percent of his concepts figured out before he starts working on site, but sometimes that percentage is completely flipped. That’s a stark contrast in philosophy from what Weed told me.

Staples may have summed it up best: “I don’t really care how you do it. It’s just, is it any good?”

Par-3 courses can begin to feel repetitive if not done correctly. Similar greens and approaches from a similar distance can get old pretty quick.

“I think there’s a lot of value in understanding shot variety,” Staples said. “If you don’t have some of that thought out going into the project, you have to be super laser-focused to not lose track of the big picture when everything is about super minute [details].”

Despite their difference in philosophy on how to get there, Weed had similar thoughts on details and variety in design.

“You can still have a little deception,” Weed said. “You’re still employing all the tools in our design bag, just everything is on a reduced scale.”

Using all of the design tools leads to entertaining golf, and this doesn’t change on a smaller course. All three architects talked about forcing golfers to hit different types of shots. On full-sized courses, a large aspect of shot variety has to do with length, but that is limited on short courses. It’s less about putting different clubs in your hand as it is making people use each club in a variety of ways. This is something Curley thought about a lot when creating his shorter courses.

“I like the idea where you have walking trails and you carry five clubs,” Curley said. “To me, that’s the perfect par-3 course.”

Limiting the clubs needed means the course becomes easier to walk and less of a slog. It also becomes a less strenuous activity for beginners and older golfers.

As I drove around with Staples that day, a lot of the shaping didn’t seem quite like what I had seen on full-sized courses.

“I’m way more aggressive in the sloping,” Staples said, “and way more interested in what happens when the ball gets on the green and where it’s going to roll.”

He pointed out spots where they were building backstops, funnels, bowls and other severe green features to get the ball moving along the ground. Weed said the key isn’t necessarily to try and repel balls off greens, but instead find a balance where it’s fun and interesting. Golf is more fun when the ball is on the ground and when we can see it roll. The small dimensions of short courses lend themselves to make this happen more often.

But another reason architects can be more aggressive in sloping and more creative in design is because of the lack of restraints and stipulations.

“You can have things be incredibly tough and it’s all fine,” Curley said. “It’s a different mindset when you’re on a par-3 course. Once people can let go of shooting a score and having to log their handicap, an architect has a lot more freedom. You can really do anything you want and no one’s ever going to say, ‘Well, that’s not a proper par-3 course.’ I don’t know if there is such thing as a proper par-3 course.”

Par-3 courses haven’t been forced into a box like many full-sized courses have, in large part because par-3 courses have the top priority of being fun rather than a test. Ironic that the restriction of space often leads to the most creative ideas.