From tees in bunkers to putting ramps, PGA National’s new par-3 course is a different kind of test 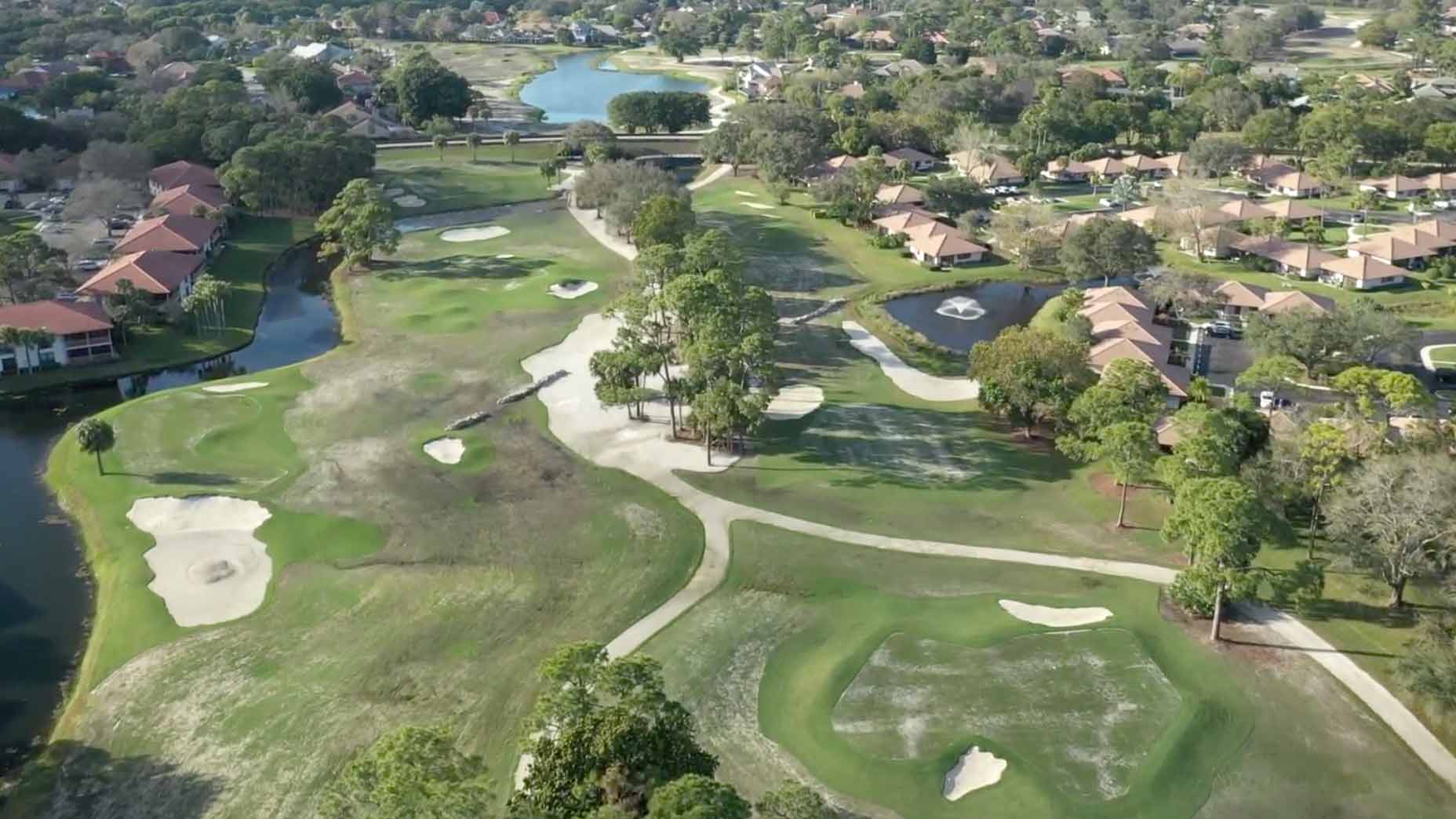 A drone view of the new Staple Course, a par-3, being built at PGA National Resort & Spa, home to this week's Honda Classic.

This week’s Honda Classic is played on the demanding Champions Course at PGA National, a Jack Nicklaus design that’s one of the toughest tests on the PGA Tour and home to the infamous Bear Trap. There are four other courses at PGA National Resort & Spa, too, from the likes of Arnold Palmer, Karl Litten and Tom and George Fazio.

In 2020, PGA National hired Staples to redesign its Squire Course. A radical plan had won Staples the job: remove the parallel 1st and 18th holes, replace it with a par-3 course and reshape the existing Squire Course into a shorter course.

“The last thing I want to do is try to make the Squire out-champ the Champ (course),” he told ownership during his pitch. “You want to actually have fun, you’re going to come over here.”

Staples is renovating the existing 16 holes of the Squire Course and adding two new holes, which will result in a 5,744-yard design, the newly christened Match Course, that will open this summer.

Unconventional? Sure. But the par-3 course — the Staple Course — has it beat.

One hole begins in a bunker. Another hole calls for a bump-and-run or pitch from the teeing ground. There are putting ramps.

If the course sounds lawless, that’s kind of the point. Each hole demands a completely different shot, some of which will make even the sharpest short-game whizzes uncomfortable. There are no specific tee boxes, either. You walk off a green, find a spot to drop your ball and play on.

From the tee set in a bunker, players must hit it 50 yards over water (good luck!). Another tee “kind of meanders into the trees,” Staples said, allowing players to practice their punch shots.

The longest hole will be about 150 yards, but many are far shorter. The greens will be regulation size and, in some cases, larger, allowing for all kinds of fun approach shots.

“I was not thinking about great par-3s as much as I was diversity in length and great approach shots, as if you drove to that area and had to hit onto the green,” Staples said. “I’m way more aggressive in the sloping [here], and way more interested in what happens when the ball gets on the green and where it’s going to roll.”

On a recent tour of the course, Staples pointed out spots on the greens where there will be backstops, funnels, bowls and other severe features to get the ball moving along the ground. While Staples admits to being classically inspired, he wanted this design to feel like his creation. His main objective: keep the course accessible and fun.

Oh, and about those putting ramps: Staples says he wants players to feel like they could get around most of the course with only a putter

“Even with a little carry over water, a ramp leading up to it is steep enough that a solid strike with a putter could get the ball airborne,” he said. “The green even has a backstop to help out. Most people that play golf can’t throw darts at every green. What does every golfer want? A funnel to the hole, right?”

Another quirk of the course is how the holes are laid out — in a figure 8, but not just a simple down one way, back the other. Yes, that means there’s an intersection in the middle of the course, but Staples found a way to turn the configuration into a positive.

“Because so much is happening in a small space, I intentionally crossed holes so that everybody felt like that was kind of a meeting spot, or a crossing,” he said. “So that got everyone kind of looking around and saying, ‘OK, wait a minute. There’s a lot of activity here. Let’s slow down. Let’s figure it out.’”

On this course, figuring it out is part of the fun.

Gear up with new drivers from our Pro Shop