The Tao of Rickie: Rickie Fowler’s game may come and go but his positivity does not 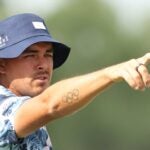 Rick’s major wins: the 2015 Players Championship, plus the 2011, ’12 and ’13 Pro-Member event at Seminole Golf Club, played each year on the Monday after the Honda Classic.

Fowler has been winning all his life. He played on two winning U.S. Walker Cup teams, in 2007 and ’09. His captain on both occasions was Buddy Marucci. Marucci, a longtime Seminole member, plays each year with Fowler in the celebrated better-ball event. The Walker Cup, by the way, will be played at Seminole in May.

Winning the Pro-Member gets you paint in the Seminole men’s locker room, which is nice. Claude Harmon, winner of the 1948 Masters and the longtime club pro at Seminole, has paint in that locker room. So does Ben Hogan. Hogan, as every Augusta schoolchild knows, started the Champions Dinner at the Masters. Fowler has played in every Masters since 2011. He has not attended a Champions Dinner. Not yet, anyway.

But how many people can say they are on the wall three times at Seminole? The famous Donald Ross course is down the road from the Fowler home in Jupiter, where he and his wife, the former Cal pole vaulter Allison Stokke, have a half-dozen (or so) cars in the garage. Rick lives large.

During Honda week, Fowler slept at home, and drove a Porsche or a Mercedes to work each day, depending on his mood. He can cite the make and model and horsepower of each one, like a first-grader reciting the alphabet. He’s always liked things with motors. He has often made golf look easy, though lately it has not been for him. He shot rounds of 70, 68, 78 and 71 at PGA National, 19 shots behind the winner, Matt Jones.

On Sunday, he was in the first twosome of the day, off the 1st tee at 8:10 a.m., playing with Bronson Burgoon. Fowler had a couple dozen people following him. He was easy to find, in his white-and-orange ensemble. (The golfer as Creamsicle.) If you were a random fan watching Fowler at the Arnold Palmer Invitational, at the Players Championship and at the Honda, you would have never guessed his results (72nd, MC, 65th, respectively). He remains upbeat, accommodating, friendly. His fifth and most recent Tour win was at Phoenix, 25 months ago, when Johnny Miller worked his final tournament.

For now, Fowler is not in the field for next month’s Masters. Not yet, anyway. He has played in 41 consecutive majors. He’s not in the field at this week’s WGC-Dell Match Play event in Austin. Next week, Fowler will play in the Texas Open, in San Antonio. If you win the week before the Masters, and you’re not otherwise in the field, you get the last invitation to Augusta. Jones, the Honda winner, has played in one Masters, in 2014. He got in that year by winning the Houston Open the week before. Jones’s Honda win gets him into next month’s Masters.

Fowler doesn’t seem to be sweating anything, and why should he? He’s 32 and healthy and has made about $40 million on Tour and likely more than $100 million when you account for his off-course income. One of his more recent endorsement deals is with a company called Level Select CBD.

He appreciates life’s little moments, the ginger snaps and sun-warmed cheddar at the turn at Seminole. “Spreads like soft butter,” Fowler said. Good times. Well, good times in normal times. Fowler noted that this year all the on-course treats are in little bags, in deference to the pandemic. One year, at Seminole, Arnold Palmer was in his group. “That goes up there as one of my best days ever,” he said.

Monday afternoon, Fowler and his wife are going to the Bahamas, to celebrate Stokke’s birthday. “Nice chance to decompress for a few days,” Fowler said.

He’s sporting a mustache and parts of a beard these days and was filled with admiration for the luxurious ‘stache he looked at all through his Sunday round, the one belonging to Bronson Burgoon’s caddie, Grant Doverspike. “I wish I could grow one that strong,” Fowler said. “It used to take me months to get anything to show up.”

On the 18th at PGA National, with his career-long caddie, Joe Skovron, otherwise occupied, Fowler raked his own greenside bunker, and you could see he took a certain pleasure in it. He’s always played and carried himself with a certain joy. The many sponsorships he has flow from that.

“Willie Mac is always in a good mood,” Fowler said. “His attitude and his mood are infectious — you want to be around him. People love him for who he is.”

Many would say the same of Fowler. They don’t even know about his slump.

The people following Fowler on Sunday morning enjoyed watching him, no matter what he was shooting. They called his name and smiled at his unassuming nods in their direction. Nobody was too focused on his place deep down the leaderboard.

It’s good to be Rick.