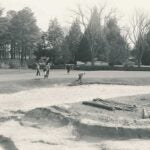 The original Yorktown Country Club included sections that were part of a Revolutionary War battlefield.

Walking through the streets of historic Yorktown, golf couldn’t feel further away, but in reality, some elite golf history surrounds the area.

Yorktown was established in 1691 by Virginia’s colonial government. Nowadays that history still remains. The area has been maintained to hold that vintage feel and the locals love it. Most of it is out in the open, ready for you to walk up and experience it firsthand. The golf history, however, takes a little uncovering.

Nearly 150 years after George Washington led the Continental troops against General Cornwallis and the British in the Siege of Yorktown, there was William Flynn crafting bunkers and turf on the original battlefield. Yes, that William Flynn. The designer of Shinnecock Hills and Merion fame. The man who touched up Pine Valley, the No. 1 golf course in the world.

In November 1923, William Flynn was mostly finished with the first of two courses proposed to be built at Yorktown. Together, they were set to become Yorktown Country Club (YCC). One course overlooking the York River and Chesapeake Bay, and another called “Lakeview,” which was designed but never created due to the Great Depression.

As it was put in a prospective membership booklet from the time, “Nature reached its apotheosis at Yorktown.” According to a 1923 write-up in the Newport Daily News, “the ground for every hole is undulating, and yet not uninviting, making the course neither too easy for a good golfer nor too hard for a player of average ability.”

Original plans were quite simple: remove thousands of trees and use the natural hazards like “ravines, woodlands, lakes and the river.” The course was also set to have multiple tee boxes on each hole — a novelty at the time — but not just two tee boxes in the modern sense. Two tee boxes that are considerably different, located well away from each other on each hole as to create a triangle with the green, and thus creating two mostly distinct holes in one space. One shorter and one longer.

Considering the land on which it was crafted, the hole names were appropriately patriotic. The first: George Washington, a 319-yard par 4. The second was named Cornwallis’ Surrender. The third was dubbed ‘Lafayette’ after the French military officer who aided Washington.

Flynn believed he created one of the premier links-style courses in the country, and his work was immediately appreciated. Presidents Howard Taft and Calvin Coolidge quickly became honorary members. YCC hosted college matches for the local William & Mary teams, and became a beacon of sorts for golfers up and down the Atlantic coast. From the pages of the Miami Herald on April 7, 1925:

New York, April 7 — Golfers kept in New York by business this summer, but desirous of playing their favorite game in Virginia, will have an opportunity to fly to the greens of Yorktown Country Club. Officers at the Yorktown movement, an organization seeking to preserve historically the landmarks of the ground on which George Washington fought the decisive battle of the American Revolution, announced today they had signed a contract for a weekly plane service.

Unfortunately, the course didn’t last forever. It is unclear what played the biggest role in the course’s demise, but its existence was guaranteed for about a decade until the battlefield was purchased by the National Park Service in 1937. Yorktown Country Club remained a greens and fairways pasture for players until the 50s when the battlefield land was included in a major restoration project for the area.

As the William Flynn work from the 1920s was removed from the greater Williamsburg area, it has been replaced with plenty of golf as a result. Check out all the offerings included in our guide to Williamsburg here.