Pine Valley is No. 1 (again): Tom Doak explains why this gem leads our Top 100 Courses in the World ranking

I had to choose one course as the greatest in the world, it wouldn’t be Pine Valley. To be fair, the majority of great courses fail to deliver the oft-promised combination of challenge for the elite player and enjoyability for the average golfer. There are a few that can legitimately claim to succeed at it: Royal Melbourne (West) and the Old Course at St. Andrews.

Pine Valley doesn’t even pretend to try, and that’s why it’s been rated the No. 1 Course in the World by GOLF since 1985. And the vote isn’t particularly close.

I’m not privy to the numbers now, but 20 years ago, when I was in charge of tabulating the votes, my editor at GOLF asked what would have to change for Pine Valley to fall from the top spot. The data showed that 10 of our course-rating panelists would have to decide that it didn’t belong in the top 10 at all. That wasn’t going to happen, and it’s not going to happen anytime soon.

MORE: How we rank them  |  A deep dive into the rankings

Indeed, Pine Valley’s refusal to cater to the weak golfer has always been a huge part of its appeal to better golfers, who are generally the kind of people who work in the golf business (present company excepted!) and travel around to rate golf courses. From the day George Crump conceived the place, the attitude has been that if you’re not good enough to play there, stay away, just as you should stay away from Mount Everest. That attitude gives the course an air of exclusivity that goes beyond the issue of connections and access. Yes, it’s hard to get on, and a bit hard to get to, its entrance located on a hard-to-find road that runs alongside an amusement park called Splash World in an otherwise nondescript suburban swatch of southern New Jersey. Above all, though, it’s hard to score on. 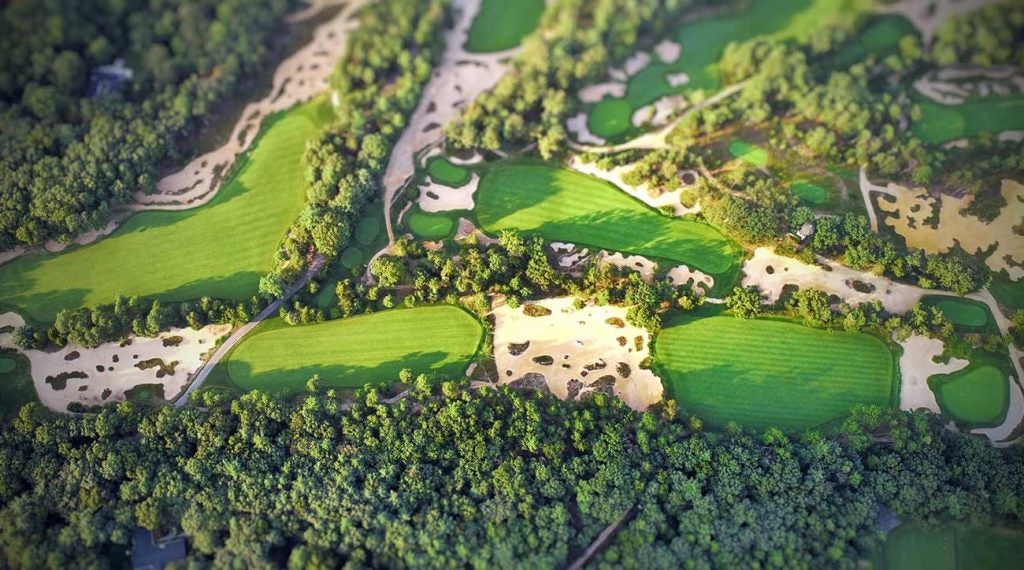 The trap at bottom, on the par-5 7th, is Pine Valleys' notorious Hell’s Half Acre. The par-4 8th that runs beside it has two greens.
Jon Cavalier

That same unapologetic approach allowed Crump — a hotelier with an obsessive streak, willing to devote his fortune and his life to this project — to build 18 great golf holes, with the decisions the golfer must make starkly framed by the native sand and vegetation of the Pine Barrens. Every hole at Pine Valley is dramatic and memorable — even the holes that nobody talks much about, like the par-4 4th up and over a ridge off the tee, or the dogleg 6th playing around the Great Pit of Carkoon on the right, or the medium-length 11th, with its perfect tee shot into a saddled fairway and perfect pitch back up a narrow valley. Any of those holes would be the best and certainly the most dramatic hole on 99 percent of golf courses in the world.

The standard is incredible. The four par-3 holes are memorable and varied. The long par 4s can kill you, but so can the 330-yard ones. There are only two par-5 holes, because it’s hard to build a great par 5, but there are no risk/reward easy birdie holes here: It took almost a century for either of them to be reached in two shots. At the 7th, you’ve got to carry Hell’s Half Acre with your second shot, and if you miss your second shot to the right at the 15th, you’re in even worse shape. Pine Valley is intimidating from the tee yet Crump never asked the player to make a carry of more than 165 yards. 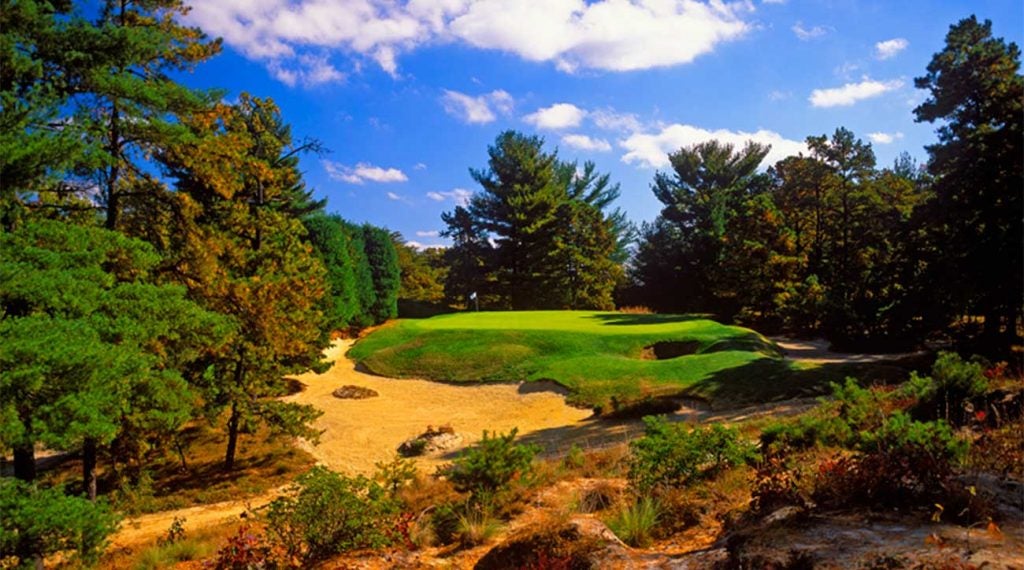 On the par-3 10th at Pine Valley, shots hit into the front right bunker (known as the Devil’s A******) will still be there years later.
Laurence Lambrecht

How did a novice at golf course design get it all so right? Golf was the only priority — the handful of houses inside the gates were an afterthought — and Crump was smart enough to pay zero attention to conventional wisdom as to how things should be done. Instead, he got help from Harry Colt to make sure his routing was sound, and then bounced ideas off his golfing friends, who included A.W. Tillinghast and George Thomas. I don’t mean to imply those guys designed Pine Valley — Tillinghast and Thomas had designed one course each at that point — but it never hurts to spend your days talking about golf design with others who have a real passion for it.

Also, behind the scenes, none of the greatest courses in the world have gotten there (and stayed there) on the merits of the design alone. In Pine Valley’s case, the man who stayed for two generations, setting a high standard for fairway and greens turf while developing the “natural” hazards that make the course unique, was greenskeeper Eb Steiniger. He started work there in the 1920s and was still around to give me a tour in 1980. The year after that, Pete Dye asked me cryptically which course that I had seen had the most turf plots for testing the viability of different grasses. When I answered that it was Pine Valley, he nodded, and told me to think about how much the contrast and texture of those different grasses added to the unique look of the course.

The world doesn’t need a lot more courses that are just like Pine Valley. Designers keep trying to imitate it, and they will forever fall short. But if more golf courses were developed by guys who cared as much as George Crump did, we’d be on the right road.