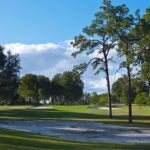 Palatka went from the brink of death to a thriving hub for the game.

Based on the busy dealings these days at Palatka Golf Course, a firm, fun, affordable Florida muni known for its rich pedigree and breezy pace of play, you’d never guess that the place had a fairly recent brush with death.

The tee sheet is packed. The ledger shows a profit.

But it wasn’t long ago that Palatka was in peril.

Rounds were down. Conditions were poor and getting worse. It was 2010, in the wake of the subprime mortgage crisis, and an existential spiral had begun.

Word at the time was that the city of Palatka, a blue-collar community roughly 30 minutes inland from St. Augustine, might soon close the course and sell the property.

That was the bad news.

The good news was that prospect didn’t sit well with Bobby Weed.

A seasoned golf course architect who’d gotten his start working with Pete Dye, Weed had first seen Palatka in the early 1970s and was smitten by the Donald Ross design, which opened in 1925 and had the Golden Age bones to show for it. Though not the sort of layout that bludgeoned you with length — (“It was maybe 5,800 or 5,900 yards but I think they cheated on the scorecard to get it to 6,000,” Weed says) — it stood up plenty for itself, with small greens and confounding contours. Its fairways were wide but angles were important. It was hard to lose a ball but also tough to score.

Then, as now, Palatka’s reputation was bolstered by its role as the host the Florida Azalea Amateur, a prestigious annual event with a knack for producing A-list winners. The future Masters champion Tommy Aaron claimed the title twice in the early 1960s when the tournament was a team competition. Bob Murphy was another two-time Azalea champ prior to his tenure on the PGA Tour.

For Weed, the thought of Palatka going belly-up came with a dose of deja vu. It called to mind the grim fate of Ponce de Leon Golf Club, in St. Augustine. The oldest Ross design in Florida, Ponce de Leon had fallen on lean times in the early 2000s and wound up being bulldozed into real estate.

“I’d always thought, ‘Maybe I could have stepped in and done something for that course,’” Weed says. “Now, it looked like the same thing might happen again.”

Vowing not to let history repeat, Weed approached the city of Palatka with a proposal: he would take over management and maintenance of the muni, nurse it back to health, then step aside.

By the time his contract ended, Weed pledged, “You’ll either have a salable asset, or you’ll have an asset that you can lease.”

In the fall of 2010, a deal was sealed, and Palatka’s turnaround got underway.

Weed and his team tackled their task on two main fronts: by reviving classic features and restoring greater fiscal responsibility. As they tightened up the books, they fine-tuned the conditions, tweaking greens and bunkers, transforming out-of-play areas into native sandy wastes, and overseeding with ryegrass in winter. For good measure, they upgraded the food and beverage program and spiffed up pro shop merchandise.

In what seemed like an eye-blink, seven years went by, and Palatka’s players responded by showing up. Buoyed by Weed’s work but also by a broader economic rebound, the course was thrumming once more, running in the black. Weed made good on his promise and turned over the keys to the clubhouse.

The city passed the lease on to Andy Heartz, Palatka’s head golf professional, who had come aboard when Weed took over and has kept the course on a steady upward path.

Crunch the numbers these days at Palatka, and you come across some gaudy stats. At its dreary low point, more than a decade back, play had dwindled to 12,000 rounds a year. That figure has since surged to roughly 30,000. Green fees top out at $29. The tee sheet is stacked at 7-minute intervals, but don’t plan on lollygagging through 18 in four hours. Three hours and forty-five minutes is Palatka’s standard pace.

“You’re not looking for a lot of balls and the greens are right next to the tees, as they should be,” Heartz says. “Playing quickly isn’t hard at a course like this.”

Two months from now, in mid-March, top amateurs from around the country will converge on Palatka for the 64th iteration of the Azalea. The tournament has soldiered on, uninterrupted, making it one of the longest continuously running amateur events in the Sunshine State (a senior division was added 11 years ago). Weed gets a kick out of the competition, especially when today’s young bombers step to the first tee licking their chops. It’s true about the yardage. Palatka tips out at less than 6,000 yards, with three readily reachable par-5s. The scorecard is deceptive; it makes the place look like a cakewalk.

“But the greens are about as big as the hood of your car, and some of the runoffs around them are scruffy hardpan,” Weed says. “Not all of those kids are used to that.”

In short, Palatka never fails to hold its own.

Weed knows there’s nothing wrong with private courses; over the span of his long career he’s stamped his name on plenty of them, including, only recently, Grove XXIII, the exclusive Shangri-La near Hobe Sound that he designed for Michael Jordan.

But as Weed is well aware, the majority of golf is played on public tracks, and little gratifies him more than dropping by the muni he helped salvage. Places like Palatka are the lifeblood of the game, so central to its makeup that we run the risk of taking them for granted.

“People talk a lot of about the formula for golf’s future—how do we make it more accessible and sustainable?” Weed says.

He’s pretty sure he knows the answer. It’s been right in front of us all along.

Gear up for your next round!