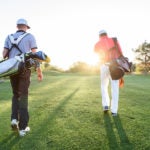 Recreational golfers are taking to the course in a big way.

Across the United States, people seem to be playing a lot of golf. The weather is warm. The alternatives are scarce. The risks seem relatively low. Golf’s offerings — in terms of exercise, interaction and recreation — are more attractive than ever.

I’ve spent the last couple months in rural western Massachusetts, where courses officially opened May 7. State requirements mandate extra spacing between tee times and restrictions on revenue generators like golf carts and food and beverage service, so there have been challenges — but not for lack of golfers. Tee sheets have been packed. One semi-private course in Williamstown, Taconic Golf Club, saw an immediate jump of some 30 members (significant in a town of just 7,000) within weeks of opening. Other cited year-over-year gains for May.

Sure, the professional tours aren’t quite back, but the challenges of getting from city to city and playing in front of tens of thousands of fans are far different than driving to a local course. I wondered: Are the packed tee sheets in Berkshire County, Massachusetts indicative of an industry-wide trend? Here are a few signs pointing to an optimistic golf forecast.

1. Junior play is (anecdotally) up.

Plenty of planned activities for kids have dried up or canceled for the spring and summer. Team sports. School activities. Summer camps. As a result, families can head to the course instead.

Ryan Asselta reported for GOLF.com that U.S. Kids Golf announced plans to play the World Championships at Pinehurst in late July and gave permission for local golf tours to start or resume, pending state approvals. While Little League’s postseason has been called off, golf’s equivalent goes on. Sign of the times, perhaps.

Another report from News Center Maine included an interview with Maine State Golf Association executive Director Brian Bickford, who has been encouraged by youth participation.

“Parents are looking for something safe and socially distant that their juniors can play, and golf is one of those great options,” Bickford said. He reported a 30-50% increase in play for many of Maine’s courses and an increase in junior and family memberships.

Golf courses in all 50 states have now been open for play for several weeks, and players and operators alike are growing accustomed to a new (and shifting) normal. On April 19th, less than half of all U.S. courses (49%) were open for play. By May 10, that number had exploded to 91%. It has continued to tick up in the weeks since and the NGF currently estimates 98% of courses are open for play.

As courses open, demand seems to follow, as Glencoe Golf Club’s general manager told the Chicago Tribune. “We’ve been sold out, people have been clamoring for tee times. All of a sudden, we’re Pebble Beach.”

The National Golf Foundation surveyed course operators and asked for their own observations when it comes to rounds played compared to a normal year. While 12% said they’d seen fewer rounds of golf, 44% said they thought rounds played was about the same as normal and another 44% indicated more rounds played than usual.

One optimistic story comes from Houston, where Jersey Meadows told Community Impact Newspaper that May was its best month since the city took over in the early 2000s. With several days to go in the month the course had already seen 4,360 rounds compared with 3,196 in May 2019, and revenue was significantly up despite additional challenges.

Another finding from the NGF suggests that golfers are searching for information related to the sport more than they have in the past five years. The chart below illustrates Google Trends related to “golf” searches and shows previous May peaks dating back to 2016. While other years topped out at values of 85, 78, 82 and 83, this year’s value hit 89. That’s a good sign people are particularly curious about getting out on course.

In studying the numbers around golf participation, one phrase has always stuck out: “latent demand.” In other words, there are a certain number of people who describe themselves as very interested in playing golf, but don’t actually end up playing. Roughly half are former golfers who have lapsed in participation, while the other half haven’t played much golf. The industry should be mindful that this number — 14.7 million people as of last year! — represents a large group of untapped players.

Stakeholders in the game would do well to increase accessibility to take advantage of that pent-up interest and drive participation rates higher. But closures related to the coronavirus may have inadvertently tapped into this group anyway. Beginner play is anecdotally up, which suggests some of those players are now making their way to the course.

“There seems to be a surge in participation among beginning golfers and those who haven’t played in a while,” NGF president and CEO Joseph Beditz wrote in an email. “Course operators are telling us they are seeing lots of new faces, and retailers are saying they are moving an unusually large number of beginner (boxed) sets of clubs.”

Here’s hoping they’ll head to the course and keep coming back.