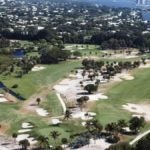 Seminole Golf Club will be shown to much of the world for the first time during this month's match.

One of the most exclusive clubs in the world is going to feel a little more public later this month as Seminole Golf Club plays host to the newly announced Dustin Johnson-Rory McIlroy vs. Rickie Fowler-Matt Wolff skins game.

The televised match for charity was officially announced Monday morning in sequence with a McIlroy appearance on The Today Show. While the format leaves many questions unanswered, the host course has many golf fans excited.

Seminole Golf Club is ranked No. 34 in GOLF Magazine’s Top 100 Courses, and is widely known as one of the most exclusive clubs in the world. Not so exclusive that new Tampa Bay Buccaneer Tom Brady couldn’t get a membership, but quite exclusive nonetheless.

The course is located in Juno Beach, Fla. and annually hosts one of the most incredible pro-member tournaments in the game. Just two years ago, it featured seven of the top 10 players in the world. The 2020 version of the event took place just a couple weeks before the PGA Tour postponed its season at the Players Championship.

So, how will it look?

The sandy, low-lying terrain has inland lakes that offset three holes that run along the Atlantic Ocean. Donald Ross was the architect who manicured the land back in the lat 1920s. Typical temperatures run in the mid-80s, so hopefully the players will get a nice breeze off the ocean.

Ryan Lavner of the Golf Channel laid out the broadcast nicely, saying NBC will have multiple reporters on-site while other members of the broadcast team will be calling the action remotely. Azinger has competed in the aforementioned Pro-member tournament, so he will surely make the most of his opportunity to discuss the famed Ross design.

For those who don’t get a chance to tune in, do not worry. Seminole will be viewable once again next year at the 2021 Walker Cup.