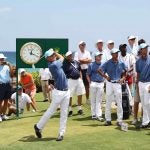 The 2021 Walker Cup kicks off on Saturday at Seminole Golf Club.

It’s hard to believe, but almost one year ago, we were gearing up to watch Rory McIlroy, Dustin Johnson, Rickie Fowler and Matthew Wolff play the TaylorMade Driving Relief charity match — the first round of televised golf in the early days of the pandemic. That match offered a rare televised glimpse of Top 100 mainstay Seminole Golf Club in Juno Beach, Fla., one of the world’s most exclusive courses.

Now, as Seminole hosts the 48th Walker Cup, the biennial two-day amateur competition between the United States and Great Britain & Ireland, we’ll have another glorious weekend to take in the famed Donald Ross design.

The Walker Cup Match is joint venture of the USGA and R&A, pitting 10 top male amateurs from the U.S. against 10 male players from Great Britain & Ireland in two match-play formats (foursomes and singles) over two days.

Team USA has been dominant over the course of the match’s history, with a 37-9 record overall, but the 2019 match featured plenty of drama, with the Americans winning eight of the final 10 singles matches on Sunday in a huge rally to defeat the GB&I team 15.5-10.5, at Royal Liverpool Golf Club in Hoylake, England. This year, Team GB&I will be seeking its first win since 2015 at Royal Lytham & St. Annes Golf Club.

One full point is awarded for each victory, while a half-point is earned for matches that are all square after 18 holes. The Americans need 13 points to retain the Cup, while Team GB&I need 13.5 points to reclaim it.

How to watch the Walker Cup on TV

With a cable subscription, you can watch the 2021 Walker Cup on Golf Channel and Peacock. Peacock will air the early action from Saturday and Sunday’s foursomes and singles matches, while Golf Channel will cover the finishes.

How to watch the Walker Cup online, streaming

You can stream the 2021 Walker Cup online in various ways. You can watch the Golf Channel coverage at golfchannel.com/watch and by logging in with your cable credentials. Peacock requires a subscription but can be accessed at peacocktv.com.