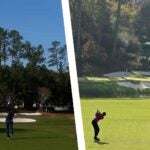 The 11th hole at Grand Ocala mimics the par-3 12th at Augusta National.

Golf viewers yearning for a taste of Augusta National don’t have to wait another month for the Masters. All they have to do is tune in to watch the best female players in the world, and they’ll be treated to a touch of St. Andrews, Royal Troon, Muirfield Village and Baltusrol as well.

The replicas begin on Ocala’s 4th, which is designed to feel like the Postage Stamp par-3, which has been replicated many times across the world, either to exact dimension or at least in concept. (The 12th at Sebonack Golf Club is one of those that emulates what the Postage Stamp stands for, conceptually.)

Then there’s the 5th at Ocala, which mimics the downhill, over-the-water par-4 9th hole at Muirfield Village. Up next is a bunch of ANGC.

The 6th at Ocala is set up like the 16th at Augusta National, one of the most exciting par-3s in the world, especially on the second Sunday in April.

The 11th at Ocala is a replica of the 12th at Augusta, which tends to speak for itself. When asked about that hole recently, Dustin Johnson said it “makes your butt pucker.” Here’s what it looked like for Nelly Korda Thursday morning.

Matching the setup at Amen Corner in Georgia, the 12th hole at Ocala imitates the 13th at Augusta National, the world-famous par-5. It will play 494 yards this week, and as Augusta National Women’s Amateur champion Jennifer Kupcho describes, it’s quite similar.

The imitation game continues with a pair of St. Andrews favorites. Ocala’s 13th is setup like St. Andrews’ 17th, the Road Hole. Then the 14th at Ocala is wide open and mimic’s the handshake opening hole at St. Andrews’ Old Course. Finally, the 15th at Ocala is a replica of the over-the-water par-3 4th at Baltusrol’s Lower course.

In all, that’s eight of the most recognizable golf holes in the world, all replicated in the same place, and all on your television set this weekend at the LPGA’s Drive On Championship. For all those stuck indoors, it should induce plenty golf jealousy all weekend long.