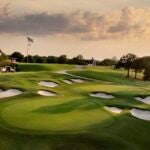 The 18th and 9th greens at Southern Hills butt up against each other, with a ring of bunkers shared between them.

TULSA, Okla. — The 2022 PGA Championship is finally upon us, and for those lucky enough to have tickets, well, the course is all yours. Have at it. For the others at home, watching from the comfort of their couches, there’s plenty to look out for at Southern Hills.

Start by watching this video from The Fried Egg, a thorough breakdown of the course’s redesign, featuring the man who did it, Gil Hanse. That synopsis is so detailed, various players have used it in the days leading up to this event to learn all they can about the property, including Rory McIlroy. Things are different, of course, once players actually take to the property, and we’ve been analyzing their every move closely as we can at Southern Hills. Based off three days of practice rounds, below are six aspects of this course you should keep in mind when watching from home.

I already wrote about this at length for GOLF.com earlier in the week, but the far west corner of this course will definitely create some awkwardness this week. Shots from the 5th hole could bound into the 6th tee. Shots from the 6th hole are sure to bound onto the 7th tee. “We’re right in the firing zone,” Brooks Koepka said Tuesday.

Then there’s approach shots on 2 that players on 6 will want to wait for. Those players on 6 will cause players on 3 to wait some more. When a great shot echos from the 5th green, there will be a wait on the 7th tee. This chaos is going to make for some irked pros, some slow rounds, and absolutely delightful viewing for the fans in Tulsa.

Two holes situated right next to each other that will definitely not create a log jam are 9 and 18 (pictured atop this article!), though they share some wicked bunkering. Reminiscent on some level of Whistling Straits, there’s just a lot of bunkers to look at for players playing up the 18th and final hole at Southern Hills. And more than the last time it hosted a PGA Championship. Hanse added four bunkers to this area, giving players more than just a lot to think about. He gave them a lot to look at. Push the approach a little right, hook it a touch left, leave it short or launch it long and some bunker is coming into play.

Now, bunkers don’t scare professionals quite like they scare amateurs, but with the slope-happy greens at this course, hitting flops and spinning sand shots can make for plenty of trouble. Especially on, say, the 72nd hole of a major championship. So, yes, these bunkers will be on players’ minds all week long, splayed out like landmines in a treacherous area for pros to waltz through.

Hanse’s renovation eliminated hundreds of trees from the Southern Hills property, and in the process of opening up a gap between 13 and 16, he combined two bunkers into one beautiful one. It might be the most magnificent bunker you’ll see on Tour this entire season.

Players will look to skirt by the bunker while they lay up on 13, and hope like hell they can avoid the deeper side of it on 16, which is normally a par 5 but is playing as a par 4 this week. A 200-yard approach from the sand into a tiny little green smells A LOT like bogey. Or worse.

The value of Monday, Tuesday and Wednesday for most pros is understanding the sight lines off the tee and what happens to their ball when they miss the green. On holes 5 and 10, that can mean a whole bunch of trouble.

Players who miss the green on 10 will certainly be disappointed in themselves, but particularly so if they tug their wedge approach left. A severe run-off area awaits, and they could find a shot that just missed rolling 30 yards away from the hole.

On the par-5 5th, a similar bank runs along the right side of the green, which Xander Schauffele was keen to check out on Monday. Schauffele dropped two balls, then flopped two shots. The first landed perfectly on the putting surface. The second grabbed a bit too much Bermuda rough and suddenly Xander’s “fourth” shot was rolling back back to his feet.

Cutting the corner on 12

If it was easy, everyone would do it, but that won’t be the case at the 12th this week. Played from the back tees, it’s about a 290-yard carry uphill to cover that bunker, which is situated in a similar position to the 5th-hole fairway bunker at Augusta National.

Play it out to the right? Fine! But just short and right of the bunker is about a 200-yard approach, downhill into the green. Players who fly the trap will eliminate about 60 yards from their approach, putting a wedge back in their hands. They love that, but they’ll have to earn it.

Spend enough time in Google Maps and you’ll see a very different Southern Hills. But the one that Hanse has recreated makes the meandering creek much more ever-present this week.

His tree-removal has been the headline of his work, but he also helped bring back sections of the creek that had been lost to time. Players have to hit tidy lay-up shots short of it on 10 and 18, daring to get as close as possible for a shorter approach. They have to bomb tee shots over the creek on 2, to make that hole as easy as possible, though as Max Homa’s caddie pointed out Wednesday, if the wind is in on 2, good luck with that carry.

Players won’t care about the creek on 12 … right up until the moment they’re out of position. Suddenly, the hazard short of the green that they were keeping far from mind has jumped front and center. That makes it the perfect little hazard. Always there, never in your face, until it gobbles up your ball, earning your respect in the process.