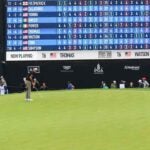 Sunday is sure to be full of drama at Southern Hills.

This week, we’re bringing InsideGOLF members exclusive insights and observations from the grounds at Southern Hills. Check your inbox each evening for the latest report from our team of tapped-in writers. Here’s what they saw and heard on Saturday.

In the opening two rounds of the PGA Championship, players dealt with 80-degree days. The heat had balls popping off the clubface. Sunscreen was a must. The greens were firm. The course was dry. Pants were a poor decision; shorts were the play.

On Moving Day, things changed. The temperature dropped 25 degrees. Quarter-zips and even some beanies made appearances. The cold shortened shots. A morning rain softened the course. The formally firm greens turned grippy. Pants weren’t enough; you needed a hoodie and handwarmers.

What course knowledge the players had amassed at Southern Hills earlier in the week proved useless on Saturday. The wind flipped. The players looked at the tops of the trees to try to figure out the club selection; they stepped off more shots Saturday than in the first two rounds combined.

All of this was expected. Changing conditions were in the forecast. Also forecasted by many: that the stage would prove too big for Mito Pereira, who has never played on a major championship weekend let alone in the final pairing. That prediction was wrong, or at least it was on Saturday. Pereira shot 69 and handled the stage like he had been there before.

At his post-round press conference, Pereira said that, going into Sunday, he is going to “keep it simple”. As I followed him the last three holes, it seemed like that plan was already in motion. On the drivable 17th, Pereira and his caddie talked over the options and eventually settled on a fairway-finding iron. Pereira took his time on that stretch of holes. He walked slowly with his head down, ignoring the crowd. On the 18th green, where the crowds were the biggest, Pereira adjusted his line at the last second before burying a birdie putt to stretch his lead to three.

Sunday major pressure is different. It means more when a Wanamaker is on the line. So, what’s the Sunday forecast in Tulsa? Partly cloudy, a high of 70 and perhaps a life-changing win for Mito Pereira.

The two sides of Rory McIlroy

It was the kind of round we’ve become accustomed to seeing from Rory McIlroy. With the PGA Championship in the balance, he played the middle part of his third round in six over, ensuring his week would end without a trophy.

Then, pressure off, he turned on the gas. He missed a short birdie putt on 12, then birdied his next two. After a par on 15, he had a tricky 25-footer for birdie on the third-hardest hole on the course. It was a tough putt, one that any player would be pleased to two-putt. But Rory being Rory, he sent his ball rolling up, down and along the slope, and into the heart of the cup.

The crowd roared. McIlroy gave a quick acknowledgement then marched to his bag, dropped his putter and shook his head.

“F—!” he said firmly under his breath.

McIlroy’s evolution into golf’s honest and freethinking statesmen has been admirable. He’s become a father, and an establishment vanguard who says all the right things. You have to wonder, though, if he doesn’t get into his own head on the course.

Earlier this week, he spoke of playing safe golf, of not shooting himself out of it too early, of clubbing up and swinging easy. It was that strategy, on his yanked tee shot at the par-3 11th hole, that led to a triple bogey. It was only after that scorecard-wrecker, just as was the case on Sunday at Augusta, that he came alive.

He harnessed a more primal version of himself. When he was playing angry, swinging for the fences, and playing on instinct without care for much else, he was at his very best.

The pride of Lubbock, Texas

Mito Pereira and I don’t share a whole lot in common. He’s a bilingual ball-striking machine, while I’m a monolingual 4-handicap in desperate search of more distance for my own game.

But there is one thing that links the long-bombing Chilean and myself: our connection to the Hub City on the South Plains — Lubbock, Texas.

Pereira played only one season of collegiate golf, but he did so at Texas Tech University. I was born and raised in Lubbock, and played high school golf on the same course the Red Raider’s call home.

With that West Texas synergy in mind, I fired off a long-shot email to Texas Tech golf coach Greg Sands with hopes that he’d have a few minutes to chat about his old player.

This was on Saturday afternoon. Within minutes, he replied.

I called up my fellow West Texan and we chatted for 15 minutes about Pereira and his unlikely link to Lubbock. Sands was hesitant to claim any credit for Pereira’s success, but he did say he’d be glued to the TV rooting on his former star — that is, until Sands has to hit the road tomorrow. He’s off to Fort Worth for the Ben Hogan Award ceremony, for which current Texas Tech star Ludvig Aberg is a finalist.

“I might take a few peeks at the stream on my phone,” Sands said.