Golf fans are already hearing plenty about Cameron Champ’s driver. But the big stick isn’t the only club that propelled Champ to his first PGA Tour victory over the weekend. Champ curiously carries two different four-irons—each with their own distinct purpose. Here’s why.

Jonathan Wall reports for the PGA Tour that when Champ began testing the new Ping i500 three-iron, it actually went too far. Champ was hitting the club 280-285 yards, nearly as far as his 3-wood. So he backed down to a four-iron in the same hollow-body club design, which he can still hit in excess of 270.

To bridge the gap between that number and the rest of his irons, the Sanderson Farm champion has another four-iron in the bag, too. The Ping iBlade four-iron is a more traditional solid-construction iron, but again, Champ hits it non-traditional distances: he told Wall that he counts on the iBlade flying 240-245 yards. 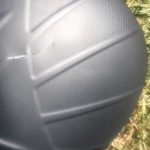 Champ claimed the Sanderson Farms title on Sunday with a final-round 68. He entered the day with a four-shot cushion but faltered early, going out in 1-over 37. But he finished with a bang: Champ stamped his first big win with five birdies in his final six holes, taking just six putts over the closing stretch. He led the field in driving distance for the week, averaging 334 yards on the measured holes for the four days. The flat stick proved mighty, too: Champ was second in strokes gained putting.

While Champ’s four-iron setup is noteworthy, it’s far from unique. The rise in driving irons has allowed players more versatility when it comes to choosing their long clubs. Adam Scott, as one example, carried multiple three-irons during some stretches this year. He also carried two putters. That was far stranger.