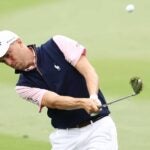 Justin Thomas heads into the final round of the 2020 Zozo Championship with a one-shot lead.

It all comes down this. With 54 holes complete at the 2020 Zozo Championship, we will finally see a champion crowned on Sunday. Here’s what you need to know to watch the final round.

For much of the third round at Sherwood Country Club, it looked as though Justin Thomas might surrender his lead before day’s end. But the World No. 3 birdied two of his final three holes to improve his total score to 19 under, good enough for a one-shot lead heading into Sunday’s final round.

Thomas was nearly dethroned by the player who sits one spot ahead of him in the world ranking, Jon Rahm. Rahm started Saturday’s round on a heater, going six under through his first seven holes to challenge JT’s lead. Rahm added three birdies over his final nine to finish off a nine-under 63, vaulting him into sole possession of second place.

Tiger Woods and Phil Mickelson both showed signs of life in the third round, but any momentum they had found stalled by the end, leaving them tied at three under.

You can find everything you need to watch the final round of the 2020 Zozo Championship on Sunday below.

How to watch Zozo Championship Final Round on TV

Golf Channel will air the action for the final round of the Zozo Championship with three hours of coverage on Sunday from 5-8 p.m. ET.

How to stream Zozo Championship Final Round online